Salvors Forge Their Way into the Future

MR: How has the industry/your company changed since 9-11?

Wittich:The salvage industry has a critical role to play in assisting the various government entities manage their maritime security mission. Under the recently formed Department of Homeland Security, the United States Coast Guard has been charged with developing the maritime strategy for homeland security.

The salvage community can directly assist the Coast Guard in achieving both of these objectives.

During the infancy of the American Salvage Association (ASA), our board made a strategic decision to co-locate our association with the American Waterways Operators (AWO) in Arlington, Va. This arrangement has enabled us to share resources and information.

when appropriate, to attain common goals. With regard to issues of national maritime security, the Coast Guard and the Army Corps of Engineers recognize that the waterfront workforce of the ASA and AWO member companies represent the country's "eyes and ears" on the water. As an association, and as individual companies, we are adding security awareness training to our existing training regime. By educating our workforce in such a manner, situational awareness is heightened and suspicious activity can then be identified and properly reported with the utmost expediency.

Like the industry, we. at Weeks Marine have made several changes to our operations in the post 9-11 world.

Immediately after the attacks on the World Trade Center (WTC), Weeks Marine, along with many other companies, dispatched its vessels to lower Manhattan to assist in the mass evacuation.

As the company tasked with executing all of the waterborne operations associated with the World Trade Center Recovery project. Weeks Marine performed the necessary dredging and constructed four temporary barge-ports on New York's East and North Rivers. With a project flotilla of four floating cranes, 43 barges and seven tugs, we then loaded and transported in excess of 1.5 million tons of steel and debris via barge to various offloading facilities within the New York Harbor area. Our ability to tap our in-house expertise in salvage, construction, dredging, stevedoring and marine transportation, as well as our diverse subcontractor network was instrumental to the project. From my firsthand experience as project executive for this project. I can clearly state that our salvage experience was a key factor in our ability to rapidly respond and undertake these tasks and successfully complete them significantly ahead of schedule.

We learned valuable lessons from this project which we now incorporate into our daily business operations. During the WTC Recovery project, it was a challenge to fill the 85 additional positions, especially the supervisory ones.

After the project's completion, we retained many of the project hired supervisors and established a program whereby they rotate among all of our operating divisions to gain a broad experience base. During normal operations, these employees work at our yards, or on various projects under the guidance of our more experienced operational managers - like Tom Weeks, VP. who runs our heavy lift and salvage division. When an emergency project emerges, this group is available to handle the task at hand, with little disruption to our ongoing operations.

This initiative proved very effective when in 2002, shortly after completing the WTC project, we were called upon by Con Edison (the primary electrical service provider to New York City) to facilitate an emergency underwater electrical cable repair in Long Island Sound which commenced on Memorial Day week-end. We were able to mobilize immediately and provide the necessary vessel support and Ro/Ro services required to ensure complete customer satisfaction.

MR: Discuss safety and training practices for the salvage industry and for your company?

Wittich:Safety and training is of paramount.

The ASA has recently developed the ASA Salvage Safety Standards, a comprehensive safety source document specifically designed for salvage/wreck removal operations. It covers a myriad of topics including, but not limited to: safety plans, inspections, subcontractor safety, accident prevention, safe work practices, emergency procedures and safety check lists. The ASA Salvage Safety Standards is a valuable resource that will undoubtedly benefit each and every ASA member. The full document is presently under final review by the ASA Executive Committee and ratification is anticipated at our September meeting.

Regarding training, the ASA has many initiatives presently underway. Our primary focus has been to participate and involve the United States Coast Guard in many of our training initiatives.

Fortunately, we receive a high degree of member participation in these programs, and I would be remiss if I didn't specifically recognize Jim Calhoun of Bisso Marine, as the catalyst within the ASA for moving many of these programs forward.

At the FOSC school, which is attended by senior Coast Guard officers, as well as invited industry and agency personnel. ASA members join other key players in a panel discussion format to familiarize the attendees with the ins and outs of salvage and wreck removal.

This initiative is then supplemented by individual ASA member company visits to local Captain of the Port offices.

Utilizing the USCG Industry Training Program as a vehicle, the ASA has successfully engaged USCG "trainee" involvement in actual salvage / wreck removal projects as an observer and contributor. It proves to be an excellent educational experience for both the company and the Coast Guard. Titan Maritime of Fort Lauderdale received a trainee from USCG Miami for a multimonth training evolution. Bisso Marine of New Orleans has reported that they implement a Coast Guard cross training exercise on nearly every job they do and find it to be most beneficial. Other members are optimistic and hope to participate in similar training evolutions on their own projects in the near future.

Fairbanks: Marine salvors have asked the International Maritime Organization (IMO) to take account of a set of four proposals when drafting guidelines on places of refuge for ship casualties. In a submission to the IMO's Subcommittee on Safety of Navigation, due to meet in July, the International Salvage Union (1SU) proposes that the new guidelines should include a provision requiring an expert inspection of the casualty before any decision is made on a request for refuge. Here, the ISU calls on the IMO to take a stand against "automatic" rejection of such requests, in the absence of a physical inspection of the casualty's condition.

The ISU makes three additional pro- posals for IMO consideration: • States, after consultation with industry, should set up a panel of experts to advise on the risks posed by any casualty requiring a place of refuge.

• Consideration should be given to the evaluation of consequences, should a place of safety be refused.

• Any financial security for the entry of a ship to a place of safety should be reasonable and not exceed legal liabilities.

The ISU has expressed its support for a French paper to the IMO which backs a provision in the guidelines for casualty inspection. The ISU, however, urges the IMO to accept the principle that this inspection should take place before any refusal of refuge.

On the second proposal, the ISU suggests that the guidelines should urge states to appoint a panel of experts - including salvors, naval architects, biologists, chemists, environmentalists and fire/explosion specialists - to give advice in a marine emergency.

The ISU adds: "In the absence of a place of safety, there is a much greater likelihood of the ship sinking, with consequent damage to the environment, albeit outside the territorial limit of the State refusing access." The paper draws attention to the risks to salvage crews in such situations.

The ISU then claims that some ports make "totally unreasonable and excessive demands" for security, using the salvor's inability to comply as an excuse to refuse entry.

During his recent address to the International Tug and Salvage Conference in Bilbao, Spain, former fSU President Jean Labescat said: "In a proportion of cases, the availability of a place of refuge can be a major factor in determining the success or failure of a salvage. The decision of a government to refuse a request for refuge can have profound consequences. The decision could place lives and the environment at greater risk." He cited a number of cases where refusal to grant refuge had influenced the outcome of casualty situations, including the tanker Castor and the bulk carriers Treasure, Bishmihita La and Ikan Tanda.

The former ISU President told the conference: "Governments have the fundamental obligation to act in the public interest. It is not in the public interest to take decisions which, at best, pass on risks to neighbouring states and. at worst, may lead to an environmental catastrophe." The ISU has said that IMO-approved criteria for assessing risks associated with ship casualties would be a significant step forward. Jean Labescat noted: August 2003 "For the first time, the salvor and the authorities would have an internationally- recognised template to work with." He added that no distinction should be made between the safety of the casualty's crew and the safety of the salvage team. The IMO guidelines should leave no room for Coastal States to reject a request for shelter without going through a formal process and that this process should focus on the salvage plan and recognise the paramount importance of swift intervention.

MR: How has the industry/your company changed since OPA '90 and the Exxon Valdez?

Fairbanks: At one time, marine salvage was all about saving property.

The marine salvage business is still about property but environmental issues have become the driving force behind new regulation. The problem with OPA 90 for salvors has been the wrong ended focus. The regulation was aimed at cleaning up the mess after a spill. The salvors' perspective is to try and prevent the spill. On the other hand, clean up became so expensive in the US that ship owners became very carefull so as to reduce spills and therefore costs. In that way, OPA 90 became a great success.

Lauderdale, hi a., with offices in Newhaven, U.K. and Sao Paulo, Brazil- Founded in 1980, the company is one of the very few in the world that still names marine salvage and wreck removal as its primary and only business. 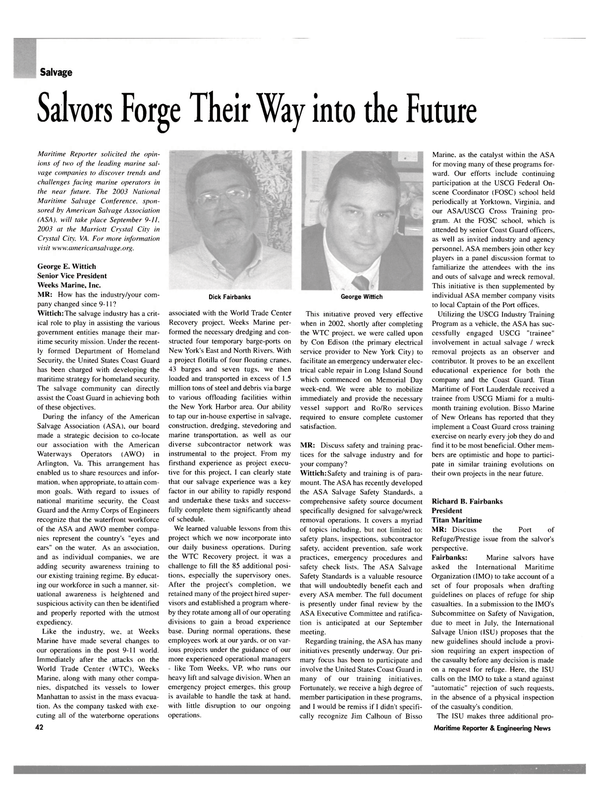 Read Salvors Forge Their Way into the Future in Pdf, Flash or Html5 edition of August 2003 Maritime Reporter