Nichols Brothers Boat Builders of Whidbey Island and Seattle-based American West Steamboat Company, owned by Henry Hillman, Jr., CEO of Oregon Rail Corp., have launched the newly constructed overnight sternwheeler cruise ship Empress of the North. On June 16, 2003, the 360-ft. (110-m) sternwheeler was transferred on a specially designed rail system into Holmes Harbor, where it was launched at high tide. Designed by Seattle naval architects, Guido Perla & Associates, construction of the Empress of the North began at Nichols Brothers' shipyard in April 2002. The largest ship built by Nichols Brothers, with more than 350 employees on the job, the project encompassed approximately 300,000 man-hours. Four decks high, the ship accommodates 235 passengers and 84 crew and features 117 ail-outside suites and staterooms, of which 105 have private verandahs.

Over 60 miles of electrical wire, eight miles of piping, and 3,500 short tons (7,000,000 lbs.) of fabri- cated steel went into the ship's construction. Its most prominent feature, a bright red paddlewheel located on the stern, which fully propels the boat, measures 42-ft.

in diameter, or the equivalent of a four-story building.

Following its launch. Empress of the North was repositioned to Everett, where it is undergoing final outfitting and sea trials before her first scheduled passenger cruise from Seattle to Juneau on August 10, 2003. 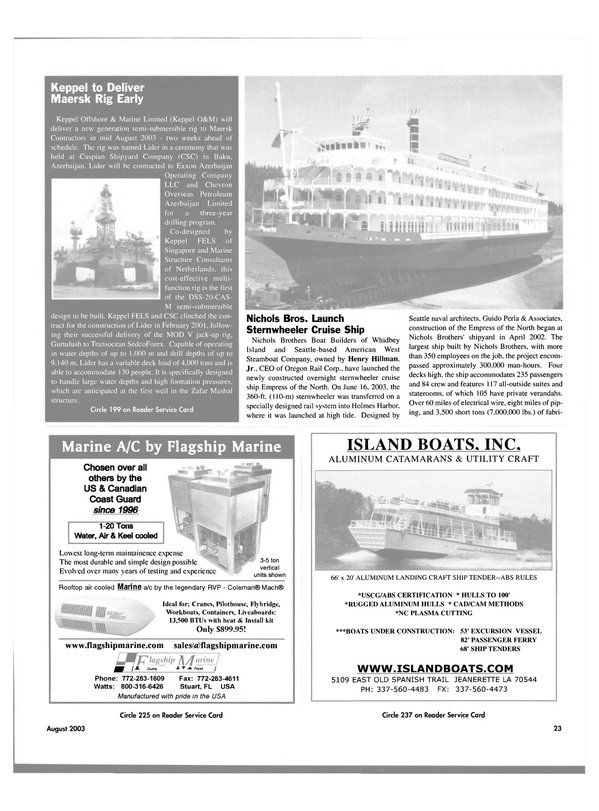