Dedicated "Flying Squads" with experienced surveyors is one element in a Five Point Plan launched by DNV to step up the efforts to remove substandard shipping. "DNV considers quality the single most important factor to improve safety and serious quality cases the biggest threat to the public confidence in shipping," says Tor Svensen, COO of DNV's Classification activities.

Besides the activation of a dedicated "Flying Squad," the Five Point Plan includes upgraded monitoring of Ultrasonic Thickness Measurement (UTM) companies, improved targeting system for potential substandard ships, actions towards high risk flags and a strengthening of resources and competence within DNV.

Regarding DNV's pledge for a stricter approval program for companies delivering Ultrasonic Thickness Measurements (UTM), Svensen explained the company's plans. "The quality of the UTM companies represents one weak point in the safety chain of international shipping. Surveys based on incorrect UTM results represent a risk for misjudgments in the planning and execution of the surveys," he said.

DNV's new approval program introduces a performance rating of each UTM company. In addition, one-man UTM companies will no longer be accepted, and a DNV surveyor will also be onboard to personally verify the measurements, and approval certificates will be cancelled for companies not performing according to the requirements.

A special targeting scheme for potentially substandard ships has so far this year been instrumental in leading up to the deletion of 32 vessels due to violation of rules and regulations, with 40 ships presently under special surveillance.

The final element in the Five Point Plan is a strengthening of resources and competence within DNV.

"We are in the process of employing an additional 40 surveyors as part of our quality drive. Extraordinary investments of $10 million in quality measures show that we are stepping up our efforts to fight substandard shipping, knowing that this is the only way to improve safety," Svensen says. 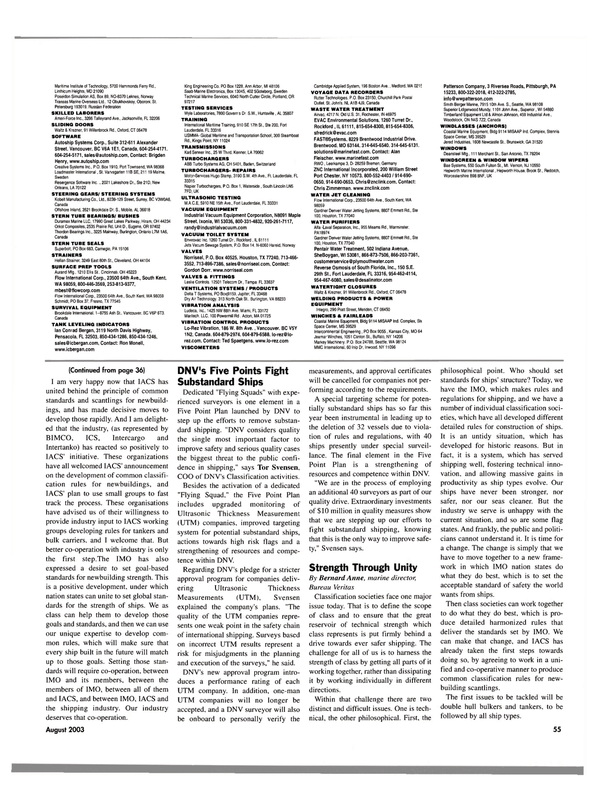