Northrop Grumman Corporation's Ship Systems sector christened LPD 17 San Antonio on July 19, 2003, at the company's Avondale operations near New Orleans, La. The 684-ft. (208.4-m), 25,000- ton San Antonio is first of 12 in a new class of amphibious transport dock ships being built for the U.S. Navy by Northrop Grumman. Named in honor of the city of San Antonio, the ship's sponsor was U.S. Sen. Kay Bailey Hutchison (RTexas), who christened the vessel.

Currently, the ship is more than 75 percent complete.

Crews will now begin to outfit the bridge.

fire-control room, living spaces, and start powering up the ship's systems. San Antonio will be commissioned for U.S. Atlantic Fleet duty in 2005, will be home ported in Norfolk, Va., will have a crew of 361 and can transport up to 800 Marines. As the first ship designed for the 21st century "Mobility Triad." the mission of LPD 17 class ships is to embark, transport and land elements of a Marine force in an assault by helicopters, landing craft or advanced amphibious vehicles in order to conduct any type of mission. 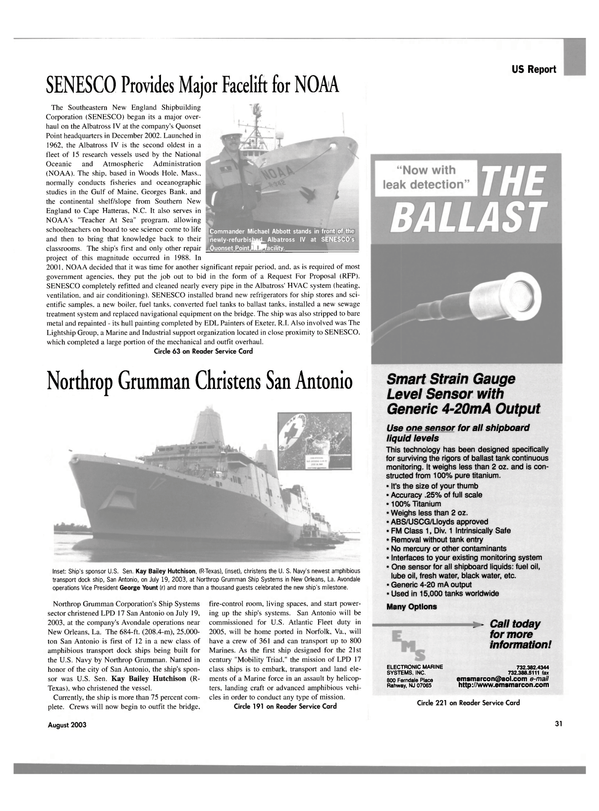