shipbuilding market was a thoughtful review, as one would expect from such a knowledgeable source whose contribution and commitment to the marine sector is well known.

Reeves & Associates, a recognized independent expert in the domestic marine sector, recently completed an excellent analytical overview of the Puerto Rico liner trade, highlighting among other things the effect of tug/barge economics and higher cube equipment. As an example, the report stated: "Rather than being technologically backward, the U.S./Puerto Rico trade is in synch with the state of the art in the U.S. mainland logistics, enabling U.S. and Puerto Rican shippers to effectively integrate their U.S. mainland- Puerto Rico traffic flows into their overall North American distribution strategies.

For example, Wal-Mart is able to pack a load for Puerto Rico in just the same way as it would for a destination within the 48 mainland states. With an integrated truck/marine system built around commodious 53-ft. equipment and very cost efficient tug/barges, we believe that we are the most "in synch" with mainland distribution systems of all the carriers serving Puerto Rico.

It's my view that the past and the future of the Puerto Rico lane can be best understood by recognizing the underlying cost differences in tug/barge and high-cube equipment systems compared to self-propelled vessels and typical marine equipment. We believe that tug/barge systems built around high- cube equipment have a meaningful marine cost advantage today that expands significantly when you take into account the pro-forma cost of new self-propelled vessels. In addition, there are a number of other areas where a high-cube, integrated system like ours has cost and service advantages. These factors will continue to effect change in the Puerto Rico lane and the simple macroeconomics of the Puerto Rico trade lane should leave few questions about what is unfolding now. what will continue to unfold and why it is unfolding.

As mentioned above, tug/barge systems now carry the majority of all the marine freight that moves to Puerto Rico. The analytical facts support a continuation of this trend. The winds of change are blowing in the Puerto Rico lane. I believe that policymakers, shipbuilders, shippers and carriers who avail themselves of solid factual data and information will be the first to see how the future will unfold and use this insight to take the appropriate steps to benefit their respective constituencies. 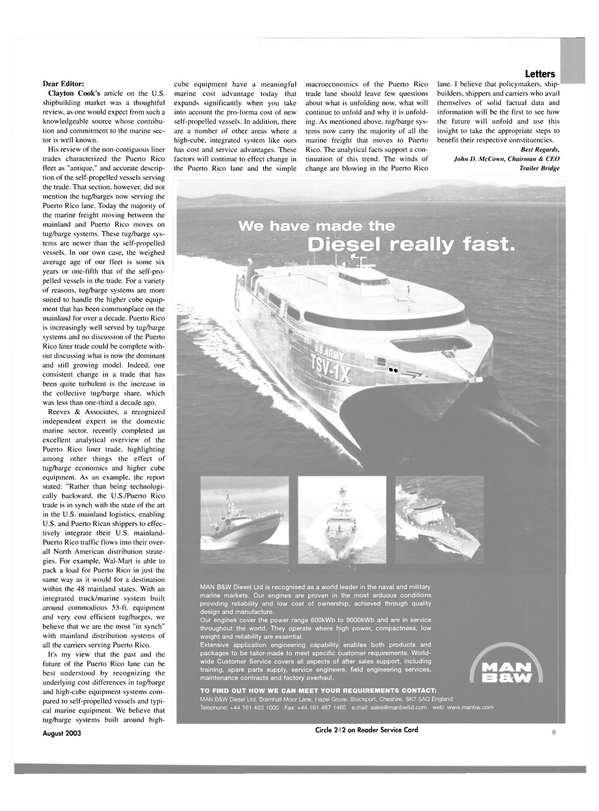