The Manitowoc Company, Inc. and its subsidiary, Marinette Marine Corporation, will partner with Kvichak Marine Industries, Inc. to develop and construct a prototype Response Boat Medium (RB-M) for the U.S. Coast Guard. Kvichak. located in Seattle with full-service waterfront facilities, will build the prototype RB-M. Using a design developed by Camarc, Ltd., Marinette Marine will serve as the prime contractor and program manager for the project - a $2.5-million test boat expected in late 2003.

The Marinette/Kvichak team, along with two other contractors, will each build a RB-M test boat as part of the competitive process. After evaluating each prototype vessel, conducting extensive sea trials, and reviewing competitive proposals from the shipyards, the Coast Guard intends to award a contract for a fleet of approximately 180 RB-M vessels to replace its aging fleet of 41-ft.

Utility Boats. The six-year contract is expected to be awarded in 2004.

Marinette and Kvichak will share vessel construction if awarded the production contract.

The new vessel fleet, which will perform missions such as homeland security and search-and-rescue operations, will exceed speeds up to 40 knots. The upgraded fleet will be safer, more efficient, and more cost-effective for the Coast Guard to operate and maintain due to standardized systems, improved maintenance, and logistics support capabilities. 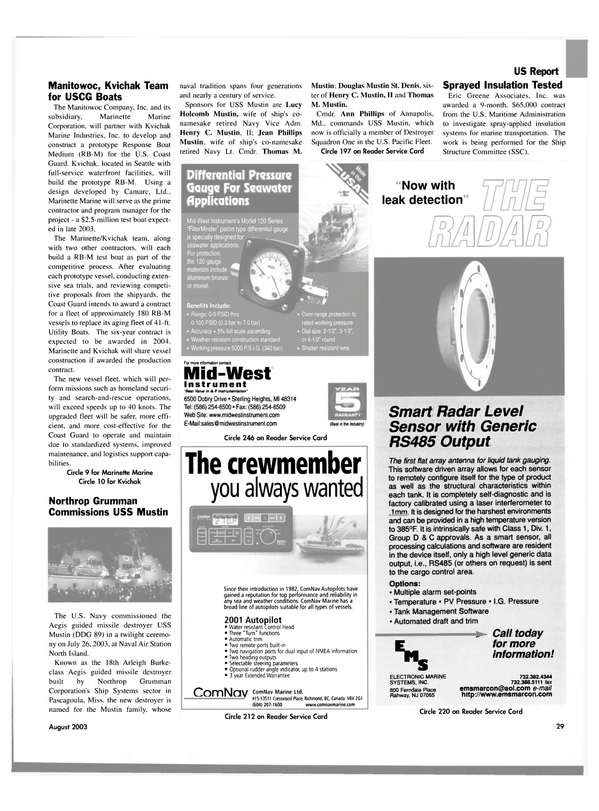