Four P-MAX new building contracts confirmed Concordia Maritime of the Stena Group has again taken the head of the industry helm with its decision to sign contracts for or an innovative new series of 49,900 dwt tankers dubbed P-MAX. The contract, which was agreed to at an undisclosed price, calls for four vessels with options for two more.

Croatia's Brodosplit Shipyard was tapped for the job, with delivery of the first ship scheduled for 2005. The P-MAX is an extension of the creative Stena MAX concept, which was the development of an advanced class of tankers with features to ensure safe operation in the world's most sensitive waters. The 600- x 131 -ft. (183- x 40-m) P-MAX ships are designed to have lower draft and higher speed than traditional, modern products tankers, and will offer 70.000 cu. m. of cargo capacity, almost 30 percent more than the 55.000 cu. m. of today's largest MR vessels. The P-MAX will offer the active safety component of propulsion redundancy seen on the VMAX VLCCs delivered to Concordia in 2001 and the C-MAX coastal products/LPG carriers introduced by Stena Bulk in 2002. The ships will have two engine rooms divided by a fire safe and watertight bulkhead: two engines with separate fuel supply and other auxiliary systems for each engine, two propeller shafts, two propellers and rudders, plus independent control and monitoring systems for each propulsion unit — in accordance with the requirements of the DNV RPS class notation (Redundant Propulsion Separate). Fuel consumption is comparable with modern MR tankers at the same cargo intake. The P-MAX double hull will be further strengthened to DNV enhanced fatigue Class Notation Plus 2. and Swedish/Finnish Ice Class IB. "The economics of scale for what is essentially a maxi medium range tanker will drive this deal in the commercial market, while there can be no doubt about the long term safety and environmental dividend" said Lars Carlsson. President of Concordia Maritime 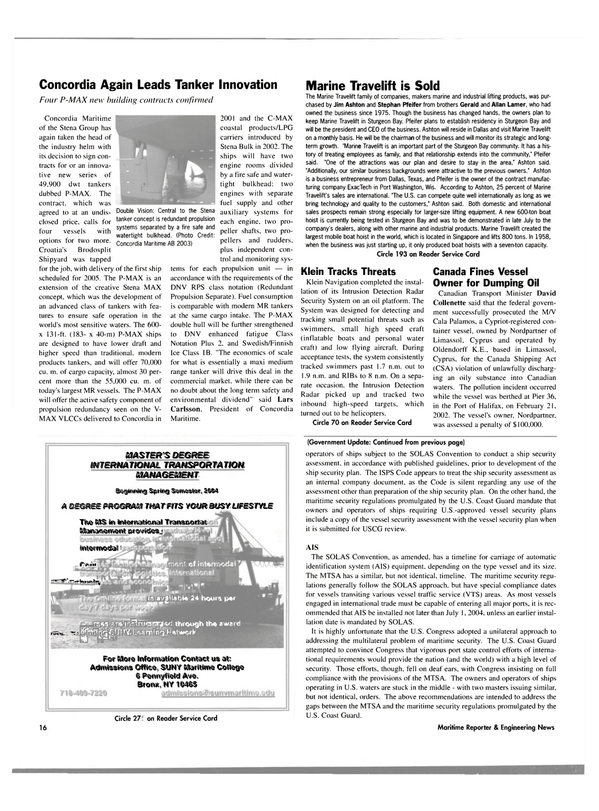