Austal has launched what it is claiming to be the largest aluminium ship ever built, the 417 ft. (127 m) trimaran ferry Benchijigua Express. Benchijigua Express is the outcome of collaboration between Fred. Olsen, S.A. and Austal involving more than three years of R&D to produce a new vessel that is designed to enable operators to begin operations on new routes where sea conditions are too challenging for existing fast ferries.

Power is provided by four 8,200 kW diesel engines driving three waterjets the Auto Express 127 trimaran will be able to maintain Fred. Olsen, S.A.'s projected service speed in excess of 40 knots and carry 1,350 passengers, over 340 cars and a substantial number of trucks. "The sight of this gigantic ship, the largest aluminium vessel to ever be built in the world, illustrates just how far Austal has come since it delivered its first vessel back in 1988," said John Rothwell, Austal's Chairman. "At 127 m this huge vessel is 4lA times longer than the first Austal-built live-aboard dive catamaran of just 30 m which was built in approximately six months with just 30 people. Now we employ 1200 people," he said. "Benchijigua Express" is now undergoing final onboard fit-out prior to undergoing sea trials during November. The vessel will then depart for the Canary Islands on a delivery voyage covering approximately 9,500 nautical miles. 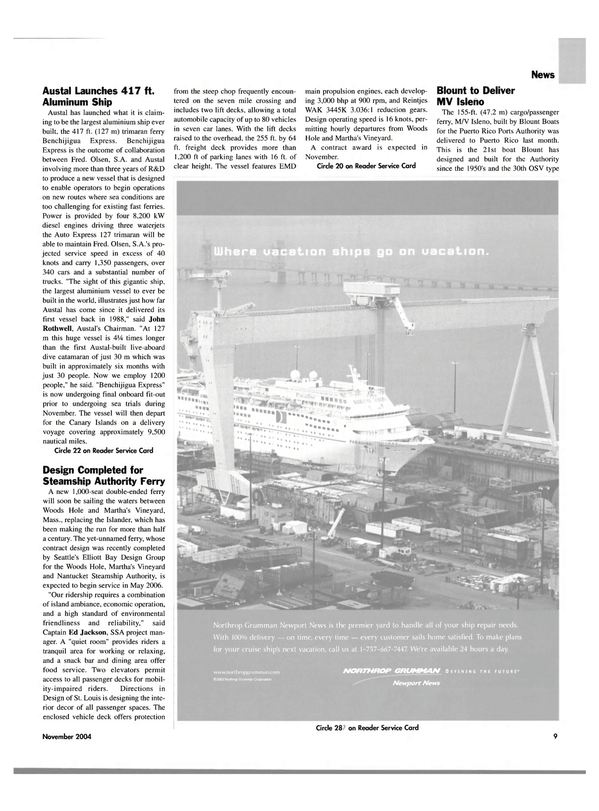