An alliance between Norwegian ener- gy group Statoil and shipowners Leif Hoegh of Oslo and Teekay Shipping of Vancouver has given fresh momentum to the drive to foster the development of ships for the carriage of compressed nat- ural gas(CNG). The technical clout and competitive influence exerted by the creation of the partnership venture Compressed Energy Technology (CETech) has enhanced prospects for the realization of a new breed of gas carrier, designed and engineered specifically for the envisioned trade in CNG.

Newly-established CETech's brief is the commercialization of new systems for the transport of CNG, and its aim is to be a leading player in the development and licensing of compressed gas shipping technology. Shipment in compressed rather than liquefied form offers potential cost and operational benefits in specific applications.

The main potential for the concept is seen within a transport range of 300-2,000 nautical miles It opens the way to exploitation of resources where field size and location means that transportation is not commercially viable if based on LNG or conventional pipeline solutions.

"Associated gas from oil fields can now be commercially exploited instead of being flared off on the field or injected back into the reservoir," observed CETech. The main potential for the concept is seen within a transport range of 300-2,000 nautical miles, and where production volumes are in the order of 0.5 to 3-billion cubic meters per year.

CETech is the result of more than two years' collaboration with the research department of Norwegian classification society Det Norske Veritas, which has also played an active part in verification and quality assurance of the technology.

The company's CNG concept has secured approval in principle from DNV, and patents have been applied for on a number of technological systems.

Various interests worldwide are promoting CNG projects, which could result in orders being placed for dedicated newbuilds. One contender for future contracts is Hyundai Heavy Industries of South Korea, which has been working with EnerSea Transport since 2002 on the development of vessel designs based on the Houston company's Votrans technology. 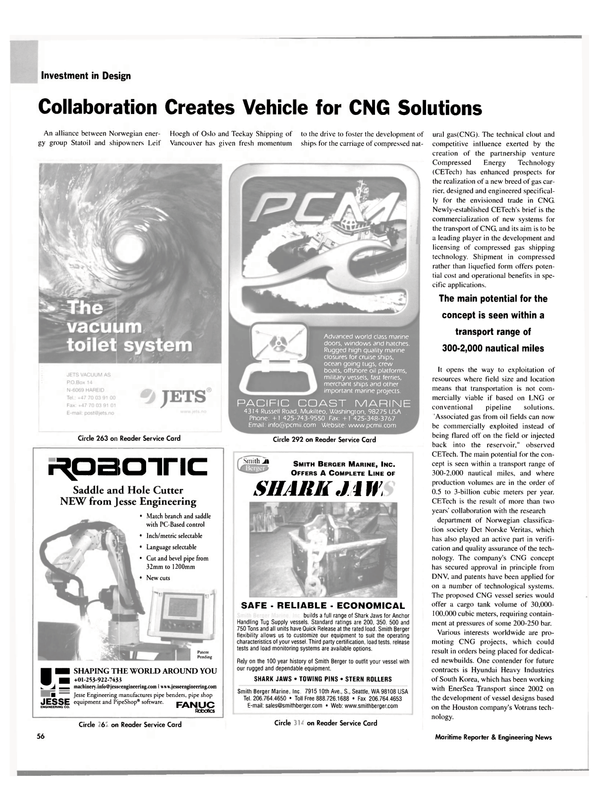