Confronted with high exhaust temperatures and emissions on the Alco engines of its Polar Class icebreakers, the U.S. Coast Guard turned to ABB for a solution.

The answer was quickly found: In a similar case the year before, retrofitting a tug's engines with ABB turbochargers had reduced the exhaust temperatures by 20 percent.

On January 3, 2001, ABB Turbocharger Co. in Tacoma, Wash., received a call from Kent Halvorsen of Boyer Towing in Ketchikan, Alaska.

This problem had existed since delivery of the vessel, and all options and fixes had been tried.

Kent was ready for new turbochargers.

The tug's full-load operating data was sent to ABB Turbocharger Company's application engineering department in North Brunswick, NJ. A look at the requirements showed that the high efficiency of ABB turbochargers would enable the exhaust temperatures to be reduced and the flow of air through the engine to be increased. Either a type VTR or VTC would do the job. After further consideration, a VTC254-13 was chosen. This size was able to supply the air that would be required and also fitted the installation best.

Boyer Towing engaged Dave Stith, a long term Skipper and Senior Port Engineer for the Company, to supervise the retrofit at the Fisherman's Terminal dry dock in Seattle. On June 1, 2001, the Billie H picked up a loaded barge from another tug and towed it at nine knots to check the results. They were excellent: Exhaust temperatures were down to well below 900 °F — a reduction of 20 percent. One week later the tug was back at work, towing freight barges between Seattle and Ketchikan.

The following year, in March, Lt. Don Miller with the Naval Engineering Support Unit of the Coast Guard in Seattle called ABB with the same problem: The USCG was experiencing high exhaust temperatures on the Alco V16 main propulsion engines and the Alco V8 SSDGs on its Polar Class icebreakers. ABB recounted the case of the Billie H and visits to the tug were arranged. Intrigued with the results, the Coast Guard invited ABB to bid replacement turbochargers on a one time trial basis.

ABB's offer was accepted and a VTC304 and VTC254 turbocharger were purchased for the V16 and V8 engine, respectively. The units were to be installed by NESU Seattle, with technical assistance provided by ABB. In September 2002 the original turbochargers were removed and the two ABB units were rigged into engine room no.2 on the USCG icebreaker Polar Sea.

Within two weeks both units had been installed and testing could commence.

Am Rest-Air Quality, LLC, of Peston, Wash., set up the measuring equipment on the stacks. The results for all four engines were soon in, and they showed convincingly that the conversion had had the hoped-for effect.

The improvement in the V I 6 installation's emissions was especially impressive.

In its final report. Am Rest-Air Quality noted that the comparative results for the third load point of 2.1 MW were interesting. While CO emissions for the main engine with the ABB VTC304 turbocharger were, as expected, much lower (36 percent, or 180 ppm versus 280 ppm), the recorded NOx concentration was also lower for this engine (1.463 ppm for 3a versus 1,604 ppm for la). An examination of the trend data showed that while the NOx emissions from engine 1A continued to rise as the load was increased, in the case of engine 3A they actually fell as the engine approached the 2.1 MW load point, leveling off at around 1,500 ppm.

The 1A NOx concentration rose to approximately 1,630 ppm and leveled off at around 1,615 ppm. Comparison of the total hydrocarbon concentration showed a similar reduction (50.0 ppm for 3a versus 52.6 ppm for 1A). A marked difference in the opacity readings was also noted: While visible exhaust emissions for 1A increased to and remained at 35 percent at the 2.1 MW load point, those for the engine with the ABB turbocharger fell consistently to below 10 percent.

With the results of the dock trials documented, the Coast Guard now wanted to know how the retrofitted engines would perform in the warmer waters of the tropics.

To find out. Bill Sanowski of NESU and the FTSCLANT inspectors joined the Polar Sea in Honolulu, on its annual trip to Antarctica to break the ice into McMurdo Scientific Station during the southern hemisphere's summer.

Extensive tests were subsequently run on the same four engines between Hawaii and Australia.

Comparison of the data for the SSDG engines showed that, with the boost, rack and firing pressures approximately equal, exhaust temperatures for the engine with the new VTC254 turbocharger were down, on average, 150°F. Comparison of the main engines' performance showed that engine 3A fitted with an ABB turbocharger was running running at a higher load (2.4 MW compared with 2.33 MW for engine 1 A), the rack and firing pressures were down, and exhaust temperatures were a full 300°F lower. After the vessel returned from Antarctica in March 2003 the USGC made the decision to install ABB VTC254 turbochargers on the SSDG engines of all its Polar class icebreakers.

The ABB Turbocharger office in Tacoma was able to modify two SSDG engines aboard the Polar Sea and one SSDG on the Polar Star before these two vessels headed south that year for the Antarctica summer. This year (2004) ABB also supplied VTC304 turbochargers for the main engines on these ships, the remaining main engine turbochargers being scheduled for installation during routine repairs in 2005. 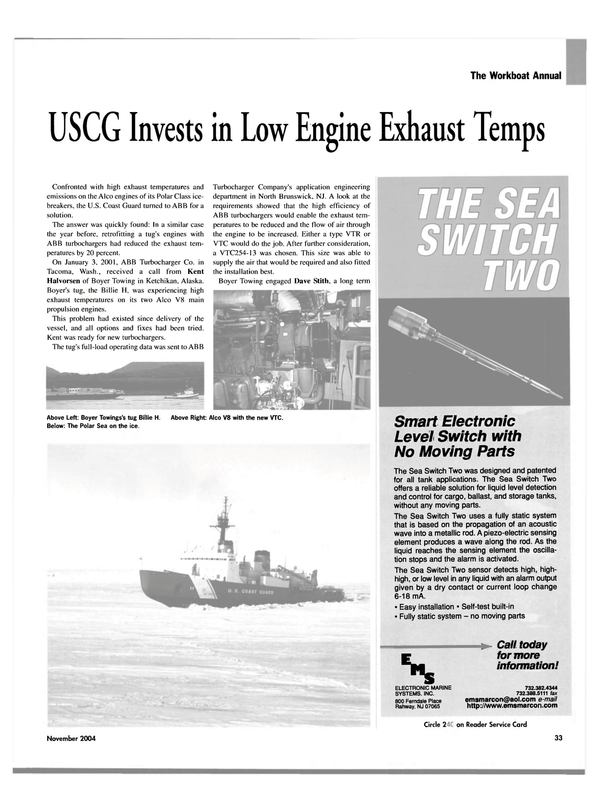