After a comprehensive tour of shipyards building crew/supply boats, it is clear the construction of these speedy aluminum vessels is the one bright spot in the offshore vessel building market.

Many operators now call their crew/supply boats "Fast Supply Boats" to point out the importance of delivering deck cargos and drilling liquids quickly.

While the deadweight tonnage is still much greater with a conventional steelhulled supply boat, the aluminum-hulled vessels are very popular with boat operators and their oil company and drilling organizations customers.

As a result, the four crew/supply boat builders in Louisiana on Bayou Teche as well as C & G Boatworks in Mobile.

Ala., and newcomer Conrad Aluminum in Morgan City. La., are enjoying a very good 2004.

"The last four boats I have started were on spec." said Roy Breaux, Jr.

president of Breaux's Bay Craft, one of the three crew/supply boat builders in Loreauville. La. "The longest any of the four was on the market was three months," Breaux exclaimed.

"I will be starting another one in November, hopefully with the same results." Breaux added. All of Breaux's Bay Craft's recent vessels are 162 ft.

director of engineering for the company.

The advanced equipment now going on crew/supply boats is similar to that on supply vessels. For example. Gulf Craft. Inc.. Patterson. La., has put both drop down and tunnel bow thrusters on its 175-ft. by 30-ft. water jet-powered crew boats for Seacor Marine. Houston.

Texas. "We have built three of these vessels for Seacor in the last 15 months and all three are rated at DP-1," said Scottv Tibbs. comptroller of Gulf Craft.

Gulf Craft also has the distinction of building one of the longest crew/supplv boats in 2004. the 175-ft. Joyce McCall.

named for the wife of the head of Seacor's Small Boat Division. Norman McCall. McCall Boat Rentals was purchased by Seacor three years ago. The vessel was delivered in September.

A series of 175-ft. crew/supply vessels for Tidewater. Inc.. under construction at C & G Boat Works, Mobile. Ala., can really claim the title of fast supply vessels because they have the ability to carry up to 1.000 barrels of liquid mud.

The first series of four were delivered in 2003 and C & G is working on the second quartet recognizing the relative importance of deck cargo and drilling liquids over passengers, these vessels hold 38 passengers, rather than the usual 70-90.

The 2004 crew/supply boat deliveries by the six yards specializing in these vessels show some interesting trends.

The first of which is that these yards will continue to build additional vessels into 2005 and beyond.

For example. Breaux Brothers Enterprises, Loreauville, La. has had a good year with a banner year set for 2005. They started the year with the 155-ft. Ms. Nancy for Joey Arceneaux at Gulf Logistics, the operating division for C&G Boats of Galliano, La.

(CBI) Chalmette, La. CB1 is in the process of rebuilding their fleet of large crew/supply vessels with multiple vessels being built at Breaux Brothers Enterprises and Breaux's Bay Craft.

All of the crew/supply vessel shipyards pride themselves on orders from repeat customers Breaux Brothers Enterprises will deliver five 160-ft. vessels in 2005.

Both CBI and Gulf Logistics will take delivery of their vessels in the first half of the year. That will be followed by three vessels of a four-vessel order from Edison Chouest Offshore. Chouest has built 13 crew/supply vessels at Breaux Brothers Enterprises and two of the three vessels set for 2005 delivery are under construction now (Mid October).

Delivery dates are July, September and December of 2005 with the fourth vessel set for March of 2006.

All are powered by four Caterpillar 3512B engines with a pair of Cat 3054 engines connected to generators rated at 72 kW each. The main deck passenger cabin had seats for 80 passengers and the rear cargo deck is 98-ft. long. These vessels have a light ship speed of 28.5 knots and 27 knots with 130 tons of cargo. "Speed, economy of operation and 385 tons of deadweight cargo capacity make these vessels popular with our customers," said Yince Breaux.

There are other differences in the vessels set for 2005 delivery. The Chouest vessels have DP-1 and CP wheels while the CBI boats have an engine dedicated to running the fire pump and the bow thruster.

As noted earlier, Crew Boats Inc., is getting back into the crew/supply boat business in a big way. Breaux's Bay Craft delivered the 162-ft. Miss Callie P in March and a sister ship the Capt. Preston P in November.

Between those two deliveries was another 162-footer the Mr. Lloyd. For Gulf Offshore Logistics (not to be confused with Gulf Logistics) of Lockport, La. delivered in July of 2004. The next vessel from Breaux's Bay Craft will be a 162-ft. from Offshore Oil Services, Freeport, Texas. This February 2005 delivery will use four Cummins KTA-50 engines, rated at 1800 hp each and Cummins-powered gensets.

Two more crew/supply vessels for CBI will follow in May and August of 2005. The company will also start a spec boat in November of this year. The third crew boat builder in Loreauville is Neuville Boat Works.

They build a variety of vessels, mostly for Seacor Marine. In 2004. the 158-ft. Elizabeth A. McCall joined the Seacor Marine fleet followed by the Chief Bayo KuKu. a 167-ft. water jet powered vessel in August, also for Seacor.

The Elizabeth A. McCall is typical of the vessels The Elizabeth A. McCall on sea trials in the Gulf of Mexico. This 160-ft. by 30-ft. vessel was built by Neuville Boat Works for Seacor. (Courtesy of Neuville Boat Works) Neuville builds for Seacor. Main power is four KT-38 engines from Cummins each rated at 1350 hp that drives the vessel to 26 knots light speed. Twin Disctransmissions couple this power to four bladed Nibral 42-in. diameter by 48-in.

tunnel type bow thruster sand is certified by the U.S. Coast Guard as Subchapter The 175-ft. Keith G. McCall from Gulf Craft. This is the first of three water jet powered crew/supply boats built in the last 15 months for Seacor.

The Seth McCall was delivered at the end of last year and the Joyce McCall joined the Seacor fleet in September 2004.

T/l and is ABS classed A-l, HSC Crewboat and AMS with Load Line.

vessel for Iberia Crew Boat Rental for February 2005 delivery and a 160-ft. x 30-ft. vessel for Seacor with five Cummins KT-38 engines for September 2005 delivery Gulf Craft, Patterson, La. remains as one of the most active builders of crew boats. They seem to specialize in the larger, more technological advanced vessels.

In 2004 they built a pair of 155-ft.x 27- ft. crew supply boats for Seacor and the third 175-ft. x 30-ft. water jet powered vessel to join the Seacor fleet over the past 15 months. Called the Joyce McCall, it is powered by four Cummins KT-50 engines coupled to four Hamilton HM-811 water jets. Maximum speed is 32 knots. Twin Cummins BT series gensets produce 99 kW of electricity each.

In keeping with its rating of DP-1 by ABS, the vessel has both a 200 hp dropdown bow thruster and a 150 hp tunnel type bow thruster. Ther tunnel thruster is driven by a Cummins 6CT series engine.

The main deck cabin passenger seating is arranged with 50 seats in Business Class and 14 in VIP Class.

At the present time, Gulf Craft has a 180-ft. crew/supply vessel under construction for Seacor for February 2005 delivery and a sister ship that will join the Seacor fleet in September 2005.

Gulf Craft also builds vessels other than crew/supply boats. Under construction now is the Big E, a 125-ft. x 26-ft.

As noted in September MarineNews, Conrad Industries has opened aluminum yard in Amelia, La. to handle new construction and repair of aluminum vessels.

water jet powered vessel for Diamond Services, also of Amelia. The vessel was designed by A.K. Suda, Inc., Metairie, La. The vessel is designed without deep tonnage frames or tonnage openings and is certified under U.S. Coast Guard Subchapter T. Power is via four Cummins KTA-38 engines. The main deck cabin can hold 100 passengers and the vessel can hold 30.000 gallons of fuel and 35.000 gallons of water.

Delivery is November of this year. 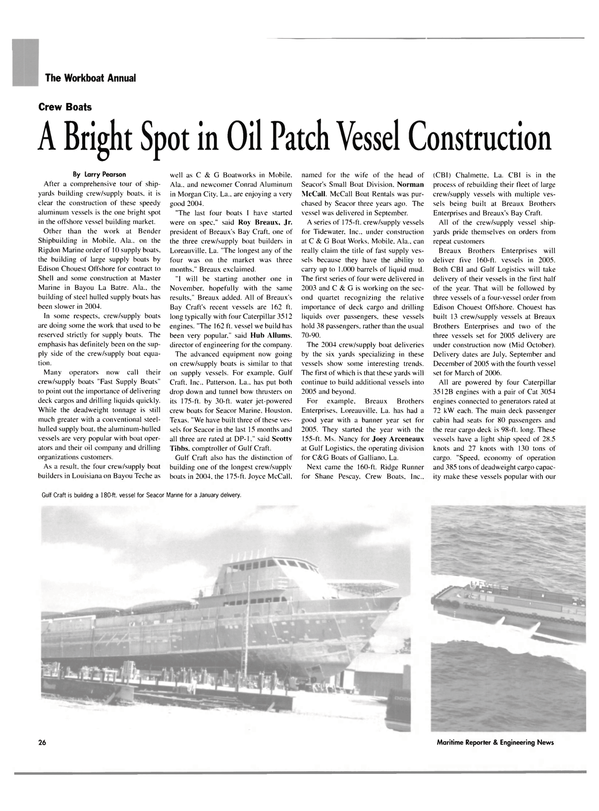