Senesco Marine signed a contract with New Jersey-based U.S. Shipping. LLC to build a 140,0000-barrel double-hulled (DH) chemical ATB with tug that can double as a 150,000-barrel doublehulled petroleum ATB. The development.

according to Gary Schuler, CEO of Senesco Marine, signals the company's move to service this growing market.

and the move will more than double Senesco Marine's workforce, which currently stands at approximately 200. "By November of 2005 we will have a workforce of more than 500 employees," said Schuler. "We are announcing to the industry that we are now focusing on state of the art ATB's." The contract for the first ATB is worth more than $40 million. In addition to the order, U.S.

Shipping has options for three 150,000- barrel DH petroleum ATB's with Senesco Marine. Construction is expected to take around 14 months for the barge and 12 months for the tug.

Senesco Marine is scheduled to start cutting steel in December and expects to deliver the ATB early in 2006. U.S.

Shipping operates six Integrated Tug and Barge (ITB) vessels in the domestic oil trade and two parcel tankers. The 48,000-dwt ton vessels are equipped with state-of-the-art technology and capable of carrying a wide variety of liquid petroleum and petro-chemical cargoes.

The ATB will be the first for U.S.

Senesco Marine has also established a strategic alliance with Luther Blount of Blount Boats in Warren, RI, to act as a technical consultant on the tug portion of the project. When complete the barge component of the ATB will measure 512 ft. long with a displacement of 26,600 tons. The 10.000-hp tug will measure approximately 145 ft. long. 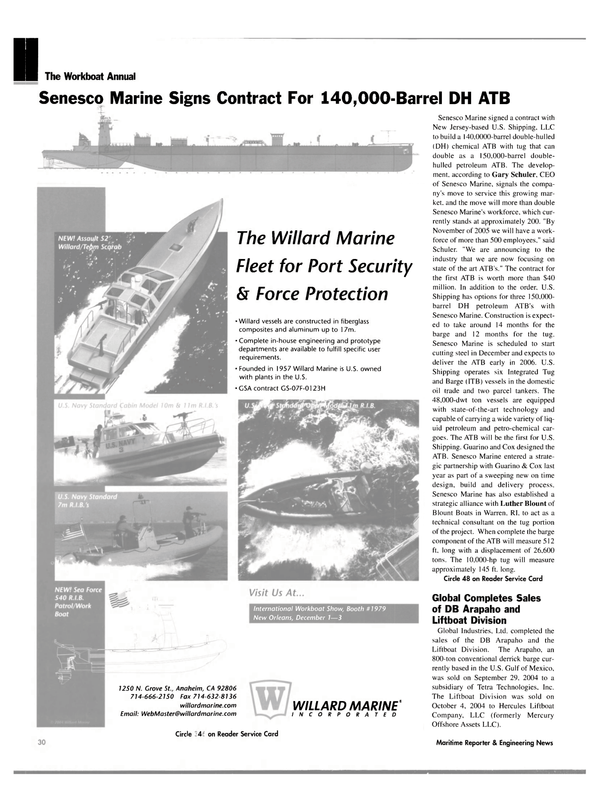