In October 1998, a large, post- Panamax containership limped into the port of Seattle, a victim of the largest ever loss of containers while on passage.

On its voyage from Kaohsiung, Taiwan, the ship had encountered a terrible storm that for some 12 hours lashed the vessel with high winds and boarding waves reaching as high as the foremast and the running lights on the bridge. The offi- cers not only saw green water at bridge level, but also had to watch helplessly as the forward container stacks collapsed.

By the time those violent seas finally passed, the ship had lost a third of its 1,300 containers on deck; another third lay wrecked and scattered about, with smashed containers and contents hanging over both sides of the ship.

Despite the best efforts of the ship's well-trained, professional crew, the vessel suffered strangely severe motions, unusual even for such storm conditions that made control nearly impossible at times. Yaw angles reached 20 degrees port and starboard, and severe rolling of up to 40 degrees combined with extreme pitching left the master without effective control of the vessel. It was, in fact, in the grip of the phenomenon known as parametric roll resonance or, simply, parametric roll. Parametric roll is one of those destructive phenomena that depend on a set of coincidences so finely balanced as to make the occurrence seem nearly impossible: the ship's geometry has to have certain characteristics; its length has to be comparable to the wave length of the sea conditions through which it is passing; and its speed must bear a certain relationship to both the wavelength and the vessel's natural rolling frequency.

The 1998 incident and its severe cargo loss warranted a full investigation, the results of which opened the maritime industry's eyes to a long-standing problem, the impact of which it had not yet fully appreciated. This investigation, which included model tests and numerical simulations, determined that hulls with fine, underwater bodies coupled with wide, flat sterns and pronounced bow flare - typical of modern containerships - may be susceptible to parametric roll.

ABS began its own investigations into the causes and remedies for parametric roll. The two-year project has involved theoretical analyses and numerical simulations, and included collaboration with Prof. J. Randolph Paulling, who in the 1970s first observed the parametric roll phenomenon in model tests.

"Shipowners would often approach me at conferences with nervous ques- tions about parametric roll, asking why and how it happens." says Vadim Belenky, the engineer leading ABS' investigations into parametric roll.

"Over time, I came to see that there is a kind of mystique and fear about this phenomenon," A ship motions specialist and former professor at the Kaliningrad University of Technology in Russia, Belenky is still an educator at heart and has dedicated himself to understanding and explaining the phenomenon. "The message I want to communicate to the industry is that there is no mystique to parametric roll. We at ABS understand the phenomenon very well and are taking actions to help keep our clients safe from it." The Problem Parametric roll is a phenomenon that occurs in head or following seas, when a ship is traveling more or less perpendicularly to the wave front. The phenomenon was first recognized almost 50 years ago but, in the past, it was seen as affecting only smaller ships of poor stability in following seas. The development of the new generation of large, fast, fine formed, high deck capacity containerships has refocused attention on the problem.

Forces that induce roll are always present at sea.

They are resisted by a ship's intact stability, a balancing force inherent to its shape that makes the vessel behave like a pendulum in its give-and-take with the sea. Should a force cause the ship to roll, stability provides the counter-force that tries to return it to the neutral position. The momentum of the return movement pushes the ship a little beyond neutral, a process that continues in ever-smaller swings until momentum is exhausted and the rolling stops.

In parametric roll, something happens to upset that balance. Instead of consuming momentum, the ship accumulates it, rapidly and dangerously.

Ironically, part of the problem is a consequence of good design. Below the waterline, a typical containership is designed for speed, with a narrow bow and stern and a full midship section. Above the waterline, it is designed to maximize on-deck stowage capacity by extending a wide main deck as far forward as possible, inducing significant bow flare, and as far aft as possible with a large stern overhang.

As the vessel passes through the waves, it encounters a series of wave peaks and troughs. The speed at which this happens is called the encounter frequency. If the ship length is close to the wavelength, it will experience a series of situations in which the midship is sitting either deep into a peak or shallow in a trough, while, at the same moment, the bow and stern are each either shallow in a trough or deep in a peak respectively.

In terms of the hull's contact with the sea, the ship effectively changes its beam on a regular basis, from slim (when the midship is on a peak) to wide (when the bow and stern are on peaks).

Because stability varies with beam, as the vessel drives through the series of wave fronts, its stability - the source of its resistance to roll - changes dramatically as the midship moves from crest (maximum) to trough (minimum). This variation is the underlying condition that drives parametric roll.

For tragedy to strike, however, one more thing must occur: the vessel's encounter frequency has to be about twice its natural roll frequency, which places the ship in a state of cyclically recurring minimum stability.

"Imagine your ship is inclined to one side and, as you start moving back towards equilibrium you enter a wave crest where stability is lower, which causes you to roll further than you normally would expect," explains Belenky.

"As you roll back you enter a trough, where stability and its opposing force are greater. However, as you return towards equilibrium resistance again drops off but the force pushing is still the stronger one from a moment before, and again you roll further than you would expect. As this continues, you gain momentum and speed, the way a child pumping his legs on a swing gains height - except in this case you lose containers." The containership that lost so much of its deck stow and prompted the investigations into parametric roll had experienced just about the worst of all possible cases. It is speculated that what actually saved the ship was a product of its damage: a temporary engine shutdown due to water ingress, after which the wind turned the ship from head into beam seas, forcing it out of the parametric roll regime.

"There's even a nastier thing about parametric roll," says Belenky. "It is a threshold phenomenon. Before you cross the threshold, nothing major is happening to the ship motion: but once you cross it, you can barely stop it. You have maybe five to nine wave periods - say, three to four minutes - in which to react before you get into deep trouble.

"But the threshold effect also holds the key to its own solution," he adds. "The answer is just a question of roll damping.

With every roll, you damp your energy, or transfer part of it to the water.

This makes it a game of gains and losses - lose more than you gain and you are safe," he explains.

"One possible solution to this formerly mystifying problem, as confirmed by our research, is simply to install a small anti-roll tank to absorb the surplus energy that you otherwise collect to produce parametric roll. When I say small, I mean it; a properly tuned anti-roll tank would take the space of two containers.

Though they have only been numerically tested, in my opinion they are the best solution, based on what we know at present. We are encouraging the industry to think about this as an option." One of the key elements to the project's outcome was the work of SAIC, Science Application International Corporation, an organization of researchers and developers that has had a longstanding relationship with ABS.

About a decade ago, in a program funded jointly by the US Navy and ABS, SAIC developed LAMP, (large-amplitude motion program). A general-purpose program for seakeeping, wave loads, and other analyses, LAMP confirmed Belenky's research results into the cause of parametric roll, and demonstrated the effectiveness of anti-roll tanks as a remedy. "LAMP is like having a towing tank on your desk," says Belenky.

"Without it, it would have been very difficult to do what we have done." Solutions for Industry Since parametric roll only occurs under the exactly wrong combination of ship geometry, speed and wave conditions in head or following seas, it would appear to be an extremely rare occurrence.

Belenky however, believes it may be happening more frequently than recognized.

"The vessel involved in that initial incident is a fairly typical containership, which means that what happened to it could happen to a lot of vessels," he says. In fact, the two years of intense study that Belenky has devoted to the subject have revealed that almost all containerships, under certain conditions, are vulnerable to parametric roll.

Criteria in the ABS Guide for the Assessment of Parametric Roll Resonance in the Design of Container Carriers allow the designer to determine if a ship has this vulnerability in the worst cases. "We offer criteria that, for the first time, allow a designer to screen a design for susceptibility to parametric roll, and we recommend measures should a problem be found. If the design is vulnerable, possible options would be to go for numerical studies and model tests from which we can develop a series of diagrams that will define what combinations of speed and sea state for given load conditions might be dangerous," he says.

Armed with such information, and, say, meteorological data from weather services, the navigating officer could, for example, determine the direction and intensity of a storm, and thus avoid dangerous course and speed combinations.

"However, many things happen to a ship in a storm; parametric roll is just one of them," Belenky says. "Sometimes, for example, by turning into a quartering sea you reduce your control of the vessel, or by changing speed encounter heavier slamming that can damage the bow. The safety of the ship depends on decisions from the bridge. With our product, we help the navigating officer make a truly informed decision." Additional products presently in various phases of development include parametric roll advisory diagrams and a computer-based early warning system that, drawing on weather data and ship operations and navigational information, will alert the Master to potential trouble ahead. "In recognition of designers' efforts to deal with the problem, optional class notations have been created for measures taken against parametric roll," says Belenky. "Because it is original work, many questions will arise as the industry absorbs the technology. In anticipation, we have developed the support system to answer user questions and help with its application," he says. "It is, after all, the first time anyone can say to the industry regarding parametric roll, we understand the problem, and we have a solution." This article was reprinted, with permission, from ABS Surveyor magazine. 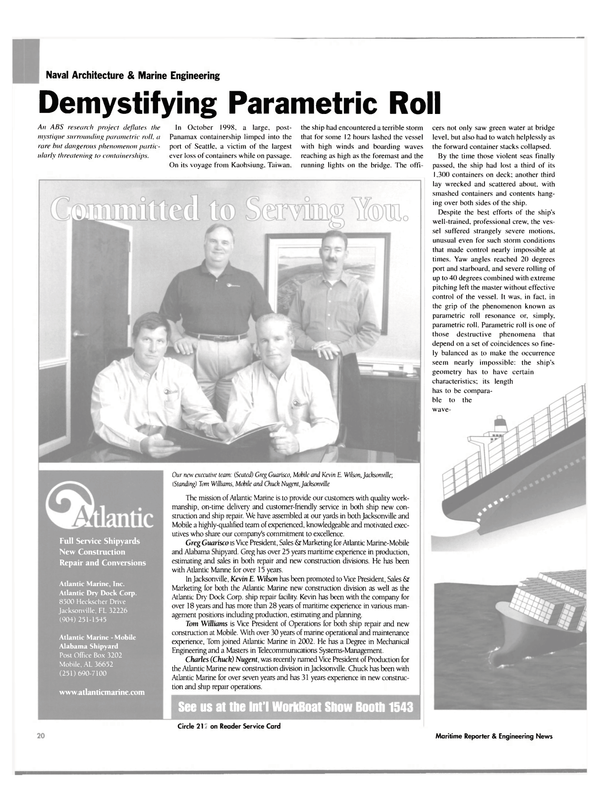