Environmental advocacy groups have alleged that ships are major contributors to air pollution. Such groups have also brought suit - albeit unsuccessfully - against the federal government, alleging insufficient regulation of air emissions from ships. Avoiding the issue of the possible merits (or demerits) of such assertions and litigation, this paper will briefly explore the current state of international, federal, and state regulation of air emissions from ships.

Annex VI to the International Convention on the Prevention of Pollution from Ships (MARPOL Convention) is scheduled to come into effect on May 19, 2005. The Annex has been adopted by 17 nations and is under active consideration by numerous others, including the United States and Australia. Nations that have ratified the Annex include: Azerbaijan, the Bahamas, Bangladesh, Barbados, Denmark, Germany, Greece, Liberia, Marshall Islands, Norway, Panama, Samoa, Singapore, Spain, Sweden, United Kingdom, and Vanuatu.

Annex VI is the international community's systemic approach to the issue of air emissions from ships. Different control strategies are used for the various emissions addressed in the annex. The provisions apply to ships of 400 gross tonnage or above engaged in international trade. The Annex sets limits on emissions of nitrogen oxides (NOx) from diesel engines with a power output of greater than 130 kW installed on a ship constructed on or after January 1, 2000. The primary strategy for reducing NOx emissions involves establishment of mandatory procedures for the testing, survey, and certification of applicable marine diesel engines. The procedures are found in the so-called "NOx Technical Code," which was adopted in conjunction with Annex VI. Oceangoing commercial ships may only install and utilize diesel engines with a power output of greater than 130 kW if such engine has been built and tested in accordance with the NOx Technical Code. Fuel for the diesel engines is another area of consideration by the Annex. In an effort to control emissions of sulphur oxides (SOx), the sulfur con- tent of bunker fuel generally may not exceed 4.5%. In designated 'emission control areas,' sulphur content may not exceed 1.5%. Currently, the Baltic Sea area is the only designated 'emission control area,' but others may be added at a later date. A program for monitoring the world-wide average sulphur content of residual fuel oils supplied for use on board ships is already in place. A ship operating in an emission control area that does not have qualifying low-sulphur fuel oil may utilize an exhaust gas cleaning system or other approved technology to minimize the SOx content of engine emissions. There is some concern that older marine diesel engines may not operate properly on low-sulphur bunkers, but only time will tell.

Concern has also been expressed that some ships may lack tankage and piping arrangements to carry two different fuels.

Bunker suppliers will be required to comply with certain technical standards regarding the fuel oil. They will also be required to provide the receiving ship with a "bunker delivery note" certifying that the bunkers meet applicable standards.

The bunker delivery note is in addition to the representative sample of the fuel oil that is traditionally provided.

Government administrations of ports where bunker suppliers operate are required to monitor their activities and take enforcement action as appropriate in cases of non-compliance with the Annex.

Governments that are party to the Annex may regulate emissions of volatile organic compounds (VOCs) from tankers by designating the ports at which such emissions are to be controlled and specifying the size of tankers to be controlled, the cargoes requiring vapor emission control systems, and the effective date of such control. Only approved vapor collection systems may be utilized.

New restrictions are placed on use of shipboard incinerators and the substances that may be burned therein.

Incinerators must have a manufacturer's operating manual and shipboard personnel responsible for operation of the incinerator must have been trained in implementing guidance contained in the manual. Various substances, including Annex I, II, and III cargo residues and related contaminated packing materials; polychlorinated biphenyls (PCBs); garbage containing more than traces of heavy metals; and refined petroleum products containing halogen compounds may not be burned in the incinerator.

Separate from the Annex, the International Maritime Organization (IMO) recently adopted a Resolution establishing policies and procedures for reduction of greenhouse gas emissions from ships. The Marine Environment Protection Committee (MEPC) of the IMO has undertaken a program to establish a greenhouse gas emission baseline; develop a methodology to describe the greenhouse gas efficiency of a ship; develop guidelines for an emission indexing scheme; and evaluate technical.

The EPA stated that it would commence analysis into a long-term approach to air emissions from all Category 3 marine diesel engines, including those on foreign flag vessels operating in U.S.

The EPA is also engaged in efforts to reduce the level of sulphur in diesel fuel and to eliminate emissions of ozonedepleting substances. The U.S. Coast Guard has promulgated standards for vapor control systems utilized on tank ships in the United States. The Coast Guard also enforces international standards applicable to shipboard incinerators.

As a result, some cruise ships now rely on shore power when making port calls in places such as Juneau. The State of California also established air emission standards for local areas, such as the ports of Los Angeles and Long Beach.

As in Juneau, some ships calling in LA/LB will be relying on shore power so as to minimize air emissions. In addition.

LA/LB have adopted a voluntary speed reduction program where ships within 20 miles of the ports maintain a speed of not greater than 12 knots in order to reduce harmful air emissions.

Ships and the engines that drive them keep getting larger. World population and world trade keep growing. One of the few things not growing is the atmosphere. 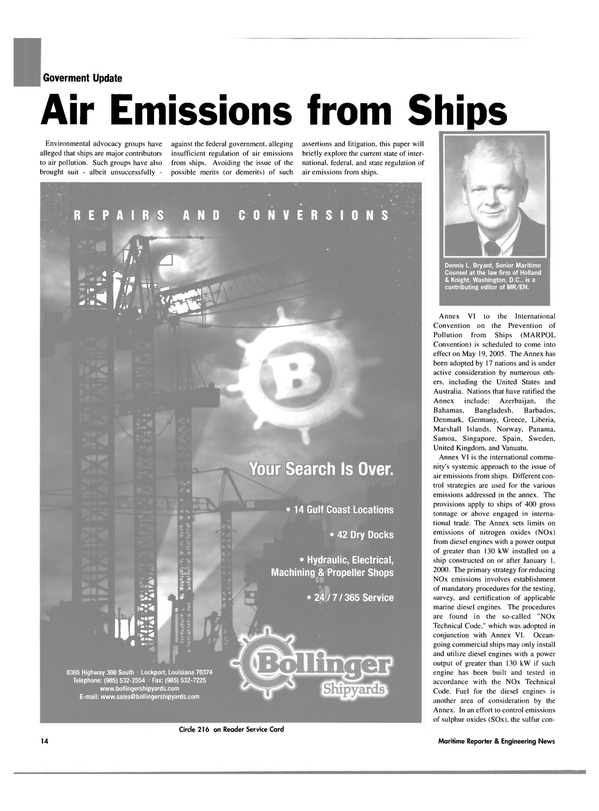