September saw the keel laying at Ulsan of the first of Hapag-Lloyd's nascent generation of 8,600 TEU containerships, embodying a beam some 30 percent greater than the maximum for Panama Canal transits, and installed with a colossal 93,360-bhp (68,640-kW) of propulsive power. At 1,099 ft. (335 m) length overall, the Colombo Express will be 49 ft. (15-m) longer than the line's 7,500-TEU Hamburg Express type, while ensuring the requisite port and terminal accessibility through a draft of approximately 47.5 ft. (14.5-m). The advance in revenue-earning capacity in the new breed will be secured through the provision for a fifth 40-ft container bay abaft the superstructure, relative to the Hamburg Express class, and by the adoption of higher lashing bridges in the main foreship section. The extension of the lashing structure will permit up to seven tiers of loaded boxes to be ransported on deck, with an eighth tier of empty units. Colombo Express will provide a milestone reference for electronically controlled, two-stroke engine technology in application to such a huge power concentration.

By virtue of the adoption of a 12- cylinder version of the MAN B&W 12K98ME prime mover, the vessel should be able to maintain an average 25-knots in keeping with scheduling needs, while engendering increased operational flexibility and improved unit efficiencies. Hapag-Lloyd claims that the engine type emits 30 percent less nitrogen oxide (NOx), and consumes some two-percent less fuel, and is able to ingest fuel having a low sulfur content of 2.5- to 3.0-percent, with additional positive environmental implications.

Leading a series of five entrusted to Hyundai Heavy Industries, Colombo Express is expected to be ready for handover at the end of March 2005. It is planned to deploy the vessels on the trade between Europe and eastern Asia. 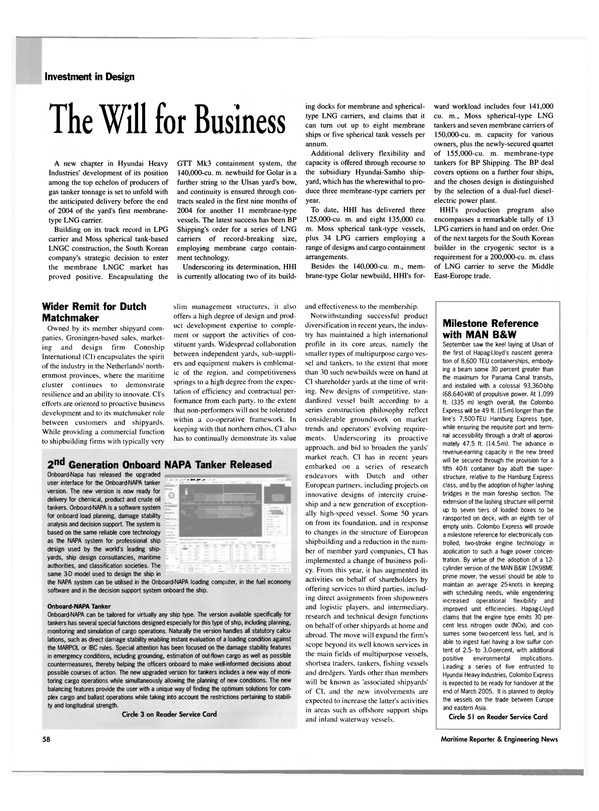