With commercial shipbuilding output expected to top 40-million gt in 2005 and 2006, attended by a shift to higher installed powers, the global spend on marine propulsion systems is set to hit record levels. A new report from analysts Douglas-Westwood forecasts that the value of the propulsion market will grow to $5.3- billion in 2004, from last year's $4.7-billion, and is anticipated to reach $5.7-billion in 2005 and nearly $5.9-billion in 2006.

The World Marine Propulsion Report 2004-2008 indicates that main engine power installations for 2004 will reach 18-GW. and that new records will be set in each of the two succeeding years, peaking at some 20- GW in 2006. One of the strongest influences is buoyant investment in the containership market, characterized by the trend towards higher capacity, more powerful newbuild tonnage.

Main engines will account for $3.85-billion of the total $5.3-billion propulsion plant expenditure for new installations in 2004, increasing to $4.15-billion and $4.29-billion for 2005 and 2006. On this basis, prime movers would up more than 70-percent of the value of the overall shipboard propulsion systems.

In 2007 and 2008. with newbuilding production falling back to around 35 million gt, the annual value of propulsion business would show a commensurate fall to just under $5 billion, with an engine market of around $3.6 billion.

To give added perspective to the sector's economic worth, the $5.3 billion propulsion market for 2004 may be set against a projected, total shipbuilding output value of some $42 billion. The latter is forecast to grow to around $45 billion in each of the peak years of 2005 and 2006. The compilers of the new report forecast that China's shipbuilding industry will account for 13 percent of main engine installations by value by 2008, compared with 7 percent in 1999. Although South Korea is also set to deliver substantially more vessels over the 2004-2008 period, its share of global engine value is not expected to increase much beyond the 30- percent achieved in 2003.

"The high power requirements for container vessels mean that this vessel sector will continue to require the greatest amount of main engine power," say the report's authors, adding "This will be followed by tankers and bulkers/general cargo vessels." Surging investment in LNG carriers also has a pronounced proportional effect on power demand. 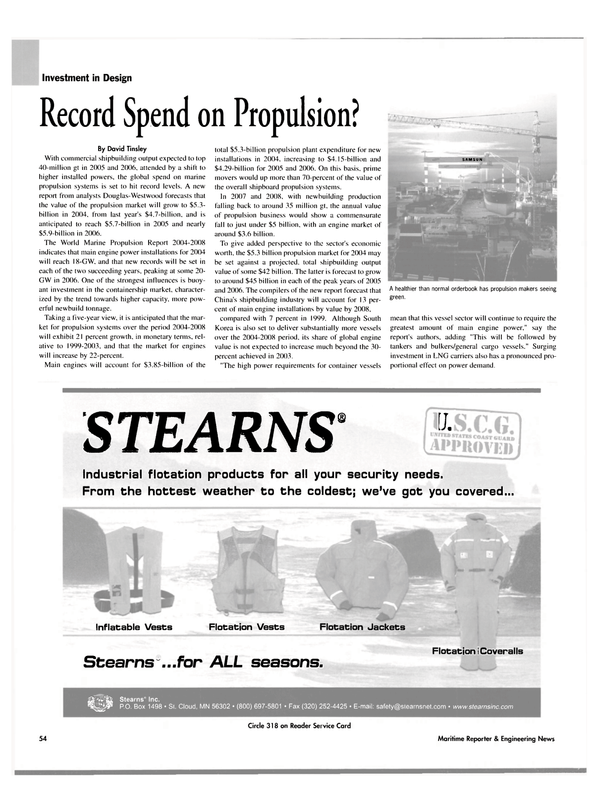