While increased regulation is often cited as the primary culprit driving shipowners to adopt new energy efficient technologies and practices for their ships, one major shipowner has a differing opinion.
“You can make the argument that regulations are what’s driving it, but personally I think it’s more economics,” said Chris Errington, Director of Engineering at Maersk Line. Errington, along with industry veteran Graham Westgarth, Executive Vice President of Operations and Strategy, GasLog Logistics, was part of a panel discussion led by Dr. Kirsi Tikka, President and COO, ABS European Division, on energy efficiency of maritime vessels held on March 19, 2013 at the Connecticut Maritime Association’s Shipping 2013 event in Stamford, Connecticut.
“I think, even without the regulations, the shipyards and the economics of it are driven by the owners. The owners are the people that are demanding better designs and better efficiencies on the vessels.” Errington said, linking much of the industry’s focus on energy solutions to the “present financial climate and the economics of more energy efficient vessels.”
Given the market’s financial turbulence, squeezing fleets for the very last drop of profit has become a necessity for many shipowners. Vessel efficiency and company profits often go hand in hand, forcing shipowners to set their sights on energy solutions as an approach toward fleet-wide savings.
“[Maersk] has targets every year. Last year the target was $40 million in fuel savings, and we exceeded that. I think it was $78 million. We actually doubled it. And in the U.S. we achieved $16.7 million of that cost,” Errington said. “At the end of the day, everything is going to equate in dollar values. We’ll continue to challenge ourselves each year as we go. This year it’s a similar challenge of $80 million globally.”
But these savings are not achieved without careful consideration and attention to detail. Even seemingly small features such as marine coatings can draw big savings, Errington said. “Paint systems play a huge factor in your economies,” he noted. “We found that you can have huge savings by having the right paint system on a vessel. At Maersk in the last two years, we have taken six of our vessels out of the water, not when they were due but drydocked them early just to change the paint system. And we could see the paybacks virtually immediately.”
Echoing Errington’s view on economic-driven energy advancements, Westgarth said, “Because of the price of fuel and the pressure the industry’s under, I’m seeing more innovation than I ever have before.
“There’s different hull designs, there’s retrofits, there’s different engines, there’s a lot of focus on using LNG as a marine fuel on ships outside of the LNG business. In 10 years’ time I think we will look back and see a quantum leap.” Speaking to the economy’s impact on future design, he added, “The new generation of ships, in my view, are going to be at least 10-15% more efficient than anything that we actually see right now.”
Westgarth also referred to regulation as a driving force for proactive energy efficiency initiatives—still not without strong economic implications.
“One way or another, there will eventually be a tax on greenhouse gas emissions, whether it is a levy or a tax, there will be some form of cost associate,” Westgarth said.
“The legislation will come, and I think if you’re a responsible company it makes a lot of sense to have the systems and processes in place before the legislation so you’re not scrambling at the last minute.”
Both Maersk and GasLog along with many other companies have used ABS framework to adopt efficient best-practices for their respective fleets, but certainly not without consideration to their company’s financial interests.
Regulations provide benchmarks which help keep shipowners on track; but the economy is ultimately shining the spotlight on energy solutions and catalyzing industry efforts toward efficiency.

According to Kirsi Tikka

On the sidelines at the Connecticut Maritime Association’s Shipping 2013, in the wake of the ABS led panel discussion on energy efficiency of maritime vessels, Dr. Kirsi Tikka, President and COO, ABS European Division shared with Maritime Reporter & Engineering News.

Maersk and GasLog are strong players obviously, but was there a particular reasoning for including them in this high-level discussion?

First and foremost, they were some of the first companies to receive this certification through ABS (ISO 50001 through our HSQEEN framework, so basically they have our notation for energy management.

For many years “being green” was more marketing slogan than corporate policy. Is this changing?

I believe that almost all companies are taking some measures for fuel efficiency. Some do it in a more structured framework, such as Maersk and GasLog; others do it within their own operational framework.

In the conference, you floated the notion of self regulation for the maritime industry. Is this a reality, and what would be the driver?

Being with a class society, we are part of the industry which to a large extent is self-regulating. If you think of the class rules, it is self regulation for the industry. We have traditionally focused on structures, machinery and safety aspects … but the class role is changing clearly now we look at energy efficiency and performance. As Graham (Graham Westgarth, EVP of Operations and Strategy, GasLog Logistics) mentioned, there are a lot of political drivers, particularly in the greenhouse gas discussion.

When you look at the legislative horizon, what do you see?

Right now, clearly Ballast Water and the ECA requirements are the big ticket items. Regarding EEDI: I think industry will adapt to it,  and it will not have the financial impact as the other two regulations. In the future, if there are market-based measures for greenhouse gas, it will have a huge impact on the maritime industry.

If you had to pick just one factor, in your mind what makes the operations of ships more efficient?

Well I’m not an operator, so I don’t have the same vision. But I probably would say it is the awareness and the training required to go beyond the awareness. I think with everyday actions you can gain a lot of operational efficiencies without doing anything else.

LNG as marine fuel is a common headline these days. What is the future for this fuel in the maritime sector?

There’s no question there is a future, and the biggest driver right now is the ECA regulation and the 2015 sulfur reduction mandates. It’s most attractive to companies with operations in the ECA area only, or for those that spend a lot of time in the ECA. That’s in the short term. In the long term, the driver will be the framework of LNG supply available everywhere in the world.”
Technical challenges can always be overcome, and while the technology is there there are some safety issues that need to be dealt with. If you look at LNG as a cargo, it has been a very safe industry. It’s a different matter though when you have a limited number of LNG carriers versus having an entire fleet operating on LNG as fuel. Do you have crews that know how to handle LNG. If you have more ships carrying LNG and you have an accident; there are still issues regarding the placement of the fuel tank and the type of piping to use. The fact that we don’t yet have international regulation is a concern.

What do you count as the most significant change in the role of class?

I think the biggest change is the step away from purely looking at the structure and the machinery and looking at human factors and performance aspects of the vessels. Moving into the verification of performance is a big change. 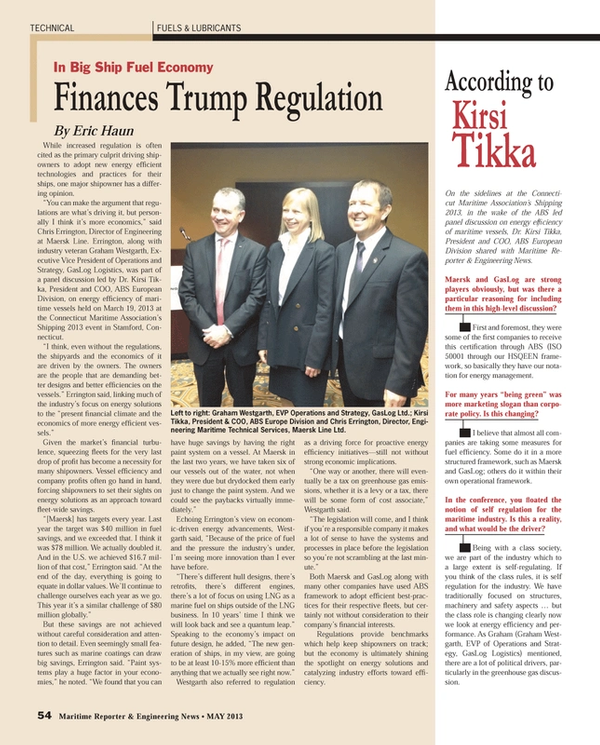