Saving money and the planet, it’s the Holy Grail for today’s cost and image conscious shipowners. Bearing that in mind, fellow open hatch cargo vessel operators should sit up and pay attention to the findings of a new research project conducted by Grieg Star, in partnership with DNV Research & Innovation, and supported by the Research Council of Norway.
Grieg and DNV have been investigating the potential of hybrid battery/diesel solutions for powering onboard cargo cranes. In a unique simulation project, using DNV’s COSSMOS tool, the pair modeled scenarios whereby two sets of four cranes were in operation over an extended period – with one set powered using a conventional system of diesel generator sets producing electric power, while the competing configuration utilized a hybrid system with a lithium-ion battery (of 312kwh).
Grieg’s operational knowledge, harvested from decades of loading and unloading products such as wood pulp, forestry cargo and steel products, and DNV’s industry focused research expertise combined to produce startling results. The hybrid solution – which actually allowed the battery to recharge itself with the energy from loads being lowered on and off the vessel – used less fuel, reduced engine maintenance requirements, produced less emissions and created huge cost savings.
The models showed that the fuel used by the conventional system amounted to 313 tons a year, whereas the hybrid solution consumed only 217 tons. This translates to a 96-ton, or 31%, fuel reduction for crane operations, totaling an eye-catching $110,000 annual saving.
After the cost of the battery and installation were taken into consideration, the payback period for the hybrid system was found to be less than one year. A strong case, DNV claims, for considering getting battery power onboard vessels “sooner rather than later.”
Grieg Star, which is currently in the middle of a $500m newbuild investment program (adding 10 new vessels to its existing fleet of 30 open hatchers), said it was encouraged by the results. Jan Øivind Svardal, Vice President Newbuildings & Projects in Grieg Star, says that the environmental and financial benefits create “a win-win” scenario for shipping businesses.
He disclosed that the firm would consider the solution for the next generation of its vessels and possible retrofitting on existing ships, if feasible. Such initiatives, he stressed, would fit in with Grieg’s broader environmental vision and sustainable business aims. 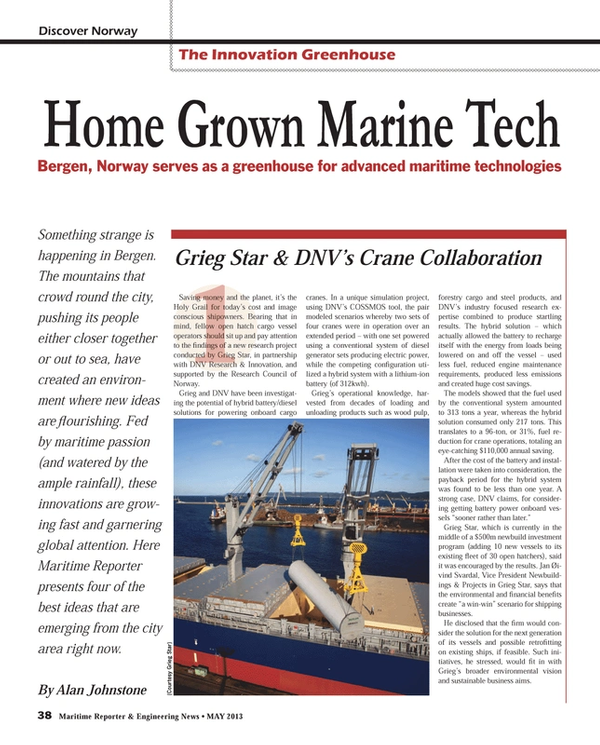