Rolls-Royce has a Gas with Bergen Engines

March 2013 saw Rolls Royce collect the Green Ship Technology Award at the Green Ship Technology Conference in Hamburg for its Environship concept, which has lean burn Bergen Engines gas power units at it core.
The Environship combines a range of Rolls Royce technologies (Bergen Engines is a subsidiary business) in a cargo ship model that, set against comparable vessels using diesel power engines, offers CO2 reductions of up to 40% (alongside 92% reductions in NOx and 100% less SOx emissions).
Stein Ruben Larsen, the Vice President of Sales & Marketing (cargo vessels), at Rolls Royce in Bergen, believes that the current combination of environmental pressures and regulatory requirements, added to increased LNG bunker availability, will lead to a surge of interest in marine gas engines. At present the market is still somewhat in its infancy, with 48 Bergen units currently operating (in 27 vessels), while the firm’s first marine gas engine recently passed 30,000 running hours.
The Environship concept, he says, is a key way to market the benefits of LNG powered engines in an attractive all-round package.  “This is an important year for us,” he told Maritime Reporter; “there are two deliveries scheduled, with more contracts expected to be signed – the latest for a LNG bunkering vessel, which we can’t quite go public with as yet.”
The two Environship vessels that will be going public this year are a multi-purpose cargo ship from Tsuji Heavy Industries (Jiangsu) Shipyard, China for Nor Lines (delivery expected in December) and a 75m long fish food carrier for Skretting in Norway, which is scheduled to be delivered this month (May). The latter vessel has been built by STX OSV in Brattvåg, Norway.
“It’s a scalable concept that is highly versatile,” Larsen concludes. “What’s more, it has the best lean burn gas engines in the world, produced right here in Bergen.” 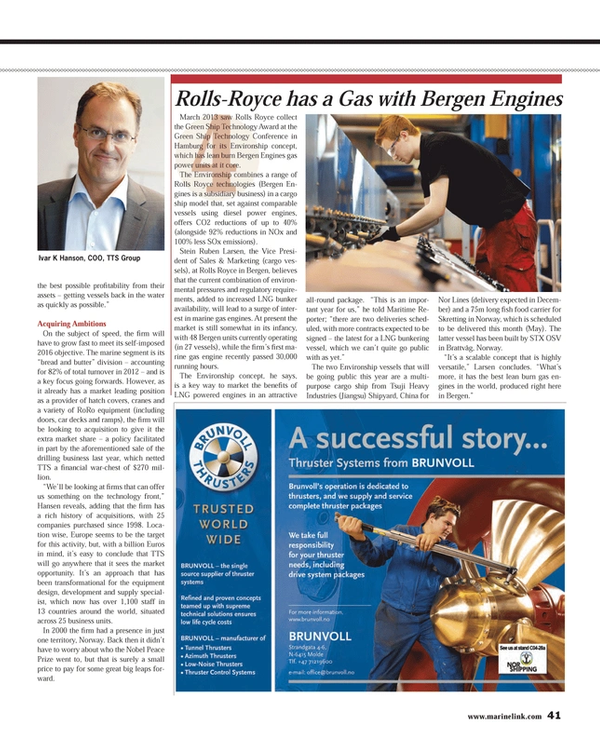 Read Rolls-Royce has a Gas with Bergen Engines in Pdf, Flash or Html5 edition of May 2013 Maritime Reporter