The United States Naval Ship (USNS) Watson is one of the large, medium-speed, roll-on, roll-off (LMSR) ships that have significantly expanded the nation’s sealift capacity. The Watson has a considerable amount of machinery including main engines, generators and cranes that need oil tested on a regular basis to detect potential problems and eliminate the possibility of a catastrophic failure. The test kits used in the past were time-consuming and their accuracy was questionable. The (USNS) Watson is operated by Ocean Shipholdings, Inc. (OSI) under contract to Military Sealift Command.
Three years ago, the ship switched to the Spectro FluidScan Q1000 handheld lubricant condition monitor and one year ago added the SpectroVisc Q3000 portable viscometer. The Q10000 performs 87 tests and provides 174 results in about two-thirds the time it took to conduct 138 tests yielding 138 results with the chemical test kit.
“The Spectro portable instruments helps us get more done in less time while providing results that are more accurate and reliable than single-test kits,” said William Maus, an employee of OSI, is the Chief Engineer of the USNS Watson. “When I show them to engineers from other ships they ask, ‘when can we get ours?’”
Military Sealift Command operates approximately 110 non-combatant, civilian-crewed ships that replenish U.S. Navy ships, strategically preposition combat cargo at sea around the world and move military cargo and supplies used by deployed U.S. forces and coalition partners. The Watson can carry a variety of military equipment in support of Army and Marine Corps operations. The Watson and other ships of its class were the major transporters of military equipment during Operations Enduring Freedom and Iraqi Freedom and during the military operations in Afghanistan and Iraq that began after the 911 terrorist attacks.
The Watson is 950 feet long, has a beam of 106 feet, a fully loaded displacement of 62,644 tons, and a service speed of 24 knots. It has a cargo-carrying capacity of more than 380,000 square feet, equivalent to almost eight football fields. There are two gas turbine engines, each with an output of 32,000 brake horse power (bhp), driving two shafts with 24 foot controllable pitch propellers at 95 revolutions per minute (rpm) at full power. The ship’s diesel generators are capable of producing 12,500 KW of electrical power. The ship has many hydraulically powered cranes, cargo doors, and ramps.

Importance of oil analysis
“Our engineering department consists of 11 people, which is not a lot for a 950 foot ship,” Maus said. “We are responsible for millions of dollars of machinery which could at any moment become critical to our national defense. As in all major Navy ships, oil analysis plays a critical role on the Watson by alerting us to problems that have the potential to damage a vital system and by providing information that enables us to efficiently allocate our scarce resources by planning maintenance based on actual need as opposed to simple intervals of time.”
In the past, Watson engineers used test kits for oil analysis. Engineers collected oil samples, brought them back to the control room, and mixed them with the chemicals in the test kit. It was necessary to perform tests in the control room to maintain a stable environment for the test chemicals and for the test equipment.  The chemicals used in the testing process are classified as HAZMAT, which poses problems for the shipping of chemicals and disposal of the used reagents.  It takes about five minutes to collect a sample, five minutes to bring it back to the control room, and five minutes to perform each of the five tests required for generator oil for a total of 35 minutes. Maus was concerned about the accuracy and repeatability of the tests because they were dependent on using the right amount of both oil and chemicals and reliability of the test kit base equipment. He was also concerned about the need to work with hazardous chemicals.

Substantial time savings
“The first thing we noticed was that Spectro Inc.’s instruments greatly simplify the process of measuring oil conditions,” Maus said. “The instruments are light and don’t require any chemicals or extra steps so you can carry them to the machinery and perform the analysis on-site.   Another benefit is a major reduction of the quantity of oil required for testing and no generation of HAZMAT requiring disposal.
The FluidScan Q1000 measures the full range of oil condition parameters in about five minutes, the same time that is required to measure a single parameter with a test kit.
The result is that it takes five minutes to take a sample of oil from a diesel generator, five minutes to measure critical parameters on the oil condition analyzer at the generator, and five minutes to measure the viscosity for a total of 15 minutes, less than half the time required with test kits.”
“When we are sitting in port and not operating a lot of equipment, we save about 10 hours per week,” Maus said. “When we are underway the savings are approximately 15 hours per week. The responsibility for oil analysis is assigned to a licensed engineer with many other responsibilities, so these time savings make his job much easier and allows more efforts to be focused on maintenance and repair throughout the ship.”

Improved Accuracy
A key part of the head-to-head assessment was comparing the accuracy of the portable instruments to the test kits. Testing by an independent laboratory showed that the portable instruments were consistently accurate over the full range of measurement parameters. The accuracy of the test kits, on the other hand, varied from good to poor depending on the specific test and the care taken by the person running the test.
For example, problems were identified in the measurement of TBN with the test kits. This measurement is used on diesel engine oil to measure additives used to neutralize acids produced as a byproduct of combustion. The test kit measurement is based on and requires entry of the original TBN in the oil. Ship’s engineers entered this value based on the specifications provided by the oil manufacturer; however, the accuracy of these specifications was in doubt. The FluidScan Q1000, on the other hand, accurately measures TBN without being dependent on manufacturers’ specs. The portable instruments also provide many additional measurements at no additional cost or time.
The FluidScan Q1000 is a rugged, handheld infrared spectrometer that measures a range of key oil condition parameters in synthetic and petroleum-based lubricants and fluids.  It can determine lubrication contamination, degradation and cross-contamination at the point of use by measuring key oil condition parameters in both synthetic and petroleum-based lubricants and fluids. FluidScan can readily determine total acid number (TAN), total base number (TBN), oxidation, nitration, sulfation, additive depletion, incorrect lubricant, water, glycol, soot, glycerine and FAME in biodiesels.
The SpectroVisc Q3000 was designed to determine kinematic viscosity in the field for applications when immediate lubricant viscosity is required to determine the health of critical equipment.  This portable, battery-operated instrument has a touch-screen interface and is easy to use.
Requiring no solvents, no density checks and no thermometer, the SpectroVisc Q3000 is ready for use whenever and wherever required. Each sample is measured at a constant temperature for consistent accuracy without pretest measurements.
Maus added that another benefit of using portable instruments is that their higher accuracy increases the confidence in their results and leads to greater predictive maintenance efforts. “The accuracy of the portable instruments gives us confidence to base our predictive maintenance program on their results. We can track exactly what’s going on and identify problems in plenty of time to take corrective action. At the same time, if the results look good we can extend the service life of the oils to save time and money. In addition to the advantages this equipment offers, the portable instruments are actually less expensive than the test kits previously used, which required replenishment of chemicals and periodic recalibration of the base unit.”
“At the end of the trial period, our guys did not want to give up the Spectro instruments and go back to the test kits,” Maus said. “The Navy agreed that the Watson could continue to use the Spectro kits while they continued their evaluations. We are hopeful they will decide to switch the entire fleet over to the new portable instruments. The end result will be increased accuracy and more measurements, which in turn will provide higher mission readiness, lower maintenance expenses, and time savings that can be applied to other shipboard projects. Our future goal is to integrate the results from the new instruments into the ship’s computer based maintenance program so measurement results will automatically be available to shoreside personnel within 24 hours after samples are tested.”
www.spectroinc.com 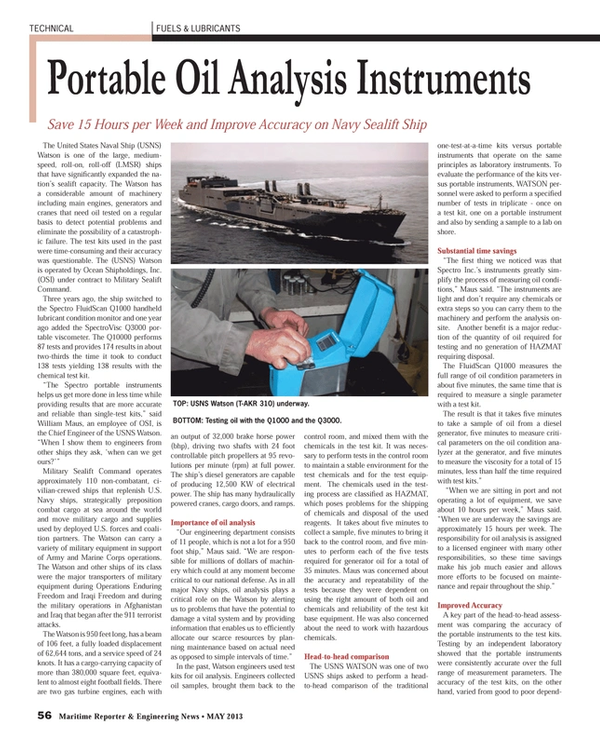