U.S. Secretary of the Navy Ray Mabus said the nation’s newest research vessel will be named R/V Sally Ride, in honor of the former UC San Diego faculty member who was the first American female astronaut and the youngest American to fly in space.
The ship is owned by the U.S. Navy, will be operated by Scripps Institution of Oceanography, UC San Diego, and will have its home port at the Scripps Nimitz Marine Facility in Point Loma on San Diego Bay.
“Scripps has a century-long history of seagoing excellence that is vital to the well-being of our planet and its pressing environmental challenges, and we appreciate the confidence the U.S. Navy has in UC San Diego with stewardship of its newest, state-of-the-art vessel for global ocean exploration,” said UC San Diego Chancellor Pradeep K. Khosla. Designed to operate globally, R/V Sally Ride will continue the Scripps legacy of conducting pioneering ocean exploration and research critical to our understanding of our planet, our oceans, and our atmosphere. As a shared-use, general-purpose ship, R/V Sally Ride will engage in a broad spectrum of research in physics, chemistry, biology, geology, and climate science, including research missions with relevance to the Navy.
“Our Navy and Marine Corps depend on detailed prediction of the ocean environment,” said Chief of Naval Research Rear Adm. Matthew Klunder.
“The new knowledge provided by our basic and applied research is critical for improvements to prediction systems. The research vessel Sally Ride will enable that research and represents the continuation of a long and fruitful partnership among the Navy, Scripps Institution of Oceanography, and the larger ocean science community.”
As a seagoing laboratory supporting research and education, the new ship will feature modern research instrumentation to fuel scientific exploration, including mapping systems, sensors, and profilers that will investigate features from the seafloor to the atmosphere.
For more than a century, Scripps has been a part of the University California and its ships have benefitted from key support from the UC System and UC San Diego.
As with other Scripps research vessels Roger Revelle, Melville, New Horizon, and Robert Gordon Sproul, R/V Sally Ride will allow early career scientists to engage in ship-based science and training to support the next generation of researchers. The ship will participate in the UC Ship Funds Program, a unique resource that allows University of California graduate students to proposes, design, and execute their own research programs at sea.
Scripps Associate Director Bruce Appelgate, head of Scripps Ship Operations, notes that the Navy funds about 30%of the work done on Scripps vessels for basic research with relevance to Department of Defense (DoD) operations. Funding for research expeditions aboard the Scripps fleet is also provided by the National Science Foundation, NOAA, and the U.S. Geological Survey.

Dr. Sally Ride was selected for NASA’s astronaut corps in 1978 and became the first American woman in space aboard Space Shuttle Challenger in 1983. In 1989, she joined the faculty of UC San Diego as professor of physics and was director of the university’s California Space Institute. She died in July 2012 at the age of 61.

The new vessel will be the third in the Scripps fleet that is owned by the U.S. Navy and managed by the Office of Naval Research, joining research vessels Melville and Roger Revelle as well as research platform FLIP.

The R/V Sally Ride is currently under construction at Dakota Creek Industries Inc. in Anacortes, Wash., and is scheduled for launch in 2015, with routine scientific operations commencing in 2016 following installation of instrumentation and sea trials. 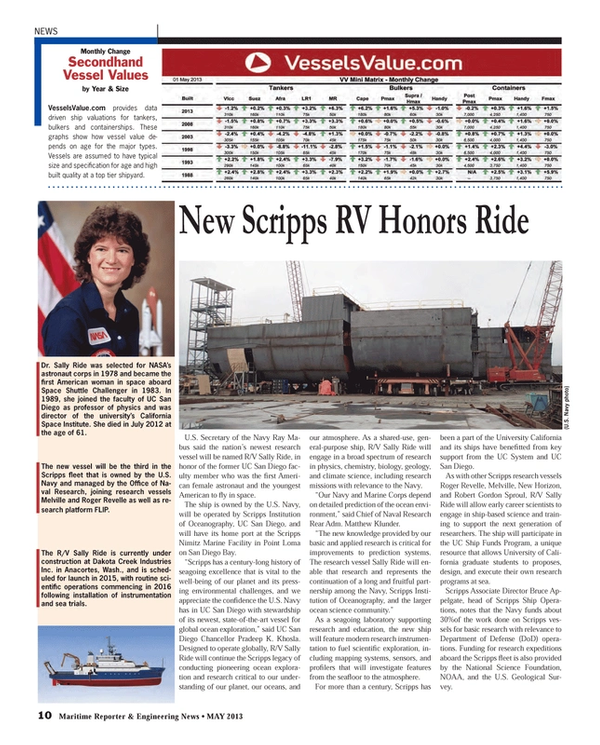