NES Powers Up in Competitive Market

Last year Bergen’s Norwegian Electric Systems (NES) made a bold claim. The designer and manufacturer of diesel electric and hybrid electric systems for the maritime sector, established in 2009 and already past NOK 1 billion in sales revenues ($171m), revealed that it had produced the largest ever low voltage marine diesel electric system.
The 690v 60Hz system was created for the 125m long, 7,500 dwt OSV Grand Canyon (pictured), released from Bergen Group’s Fosen yard to owner Volstad Management in October 2012. NES’ landmark system delivers a total of 22,600kVA (18,000kVA was said to be the previous low voltage record). The ship has two main thrusters, each driven by two 2,500kw electric motors, creating a total effect of 10,000kW (13,600 hp), with six side thrusters of 2,000kW (2,700 hp). NES CEO and President Jan Berg (pictured) describes this output as “huge” for a low voltage unit and said that the Grand Canyon project – which the firm provided a comprehensive package for, including generators, motors, main switchboard, emergency switchboard and ROV switchboard – was a defining moment in the comparatively short history of the business.
“We’re very proud of what we’ve achieved so far, and by the fact that we’re the only 100% Norwegian owned player in what is a very competitive marketplace,” he said.
Pointing to other innovations within the business, Berg highlighted the NES Quadro Drive, “a next generation propulsion convertor.” This “very compact” unit, he claimed, has weight savings over competing products, requires 50% less installation work and, technically speaking, “is three years ahead of anything else on the market.”  The drive, which Berg also described as “the icing on the cake” of his company’s portfolio, has now been installed on 14 vessels worldwide. 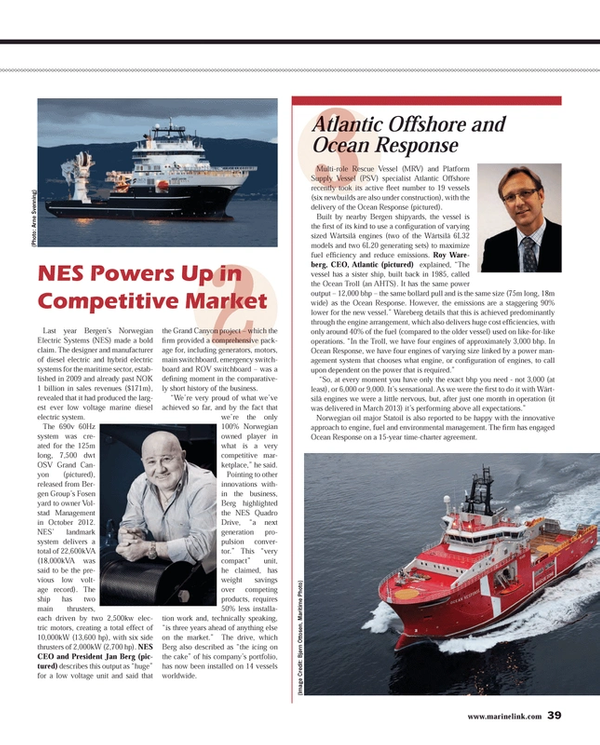 Read NES Powers Up in Competitive Market in Pdf, Flash or Html5 edition of May 2013 Maritime Reporter