Jumping Off the Fiscal Cliff?

It’s more of a Downward Slope for Maritime, Transportation, and Energy Programs

You are not alone if you are bewildered by the talk in Washington about “sequester,” “continuing resolution”, “fiscal cliff,” “budget resolutions,” and “debt ceilings.”  Even those of us who think we understand what’s going on have trouble keeping up.  This article will break down the talk into segments on the continuing resolution that funds the government for the rest of this fiscal year: the House and Senate budget resolutions, the upcoming debt ceiling fight; and, finally, the President’s budget request for FY2014.  The focus is on maritime, transportation and energy programs.

The Continuing Resolution
When the Congress cannot pass the 12 required appropriation bills to keep the government funded for a particular fiscal year, it resorts to a mechanism called the Continuing Resolution or CR.  This allows the government to remain open and to fund its programs—usually at the previous year’s level of funding.  This year, we have a mix of a regular CR and five appropriation bills to fund the government through the end of the fiscal year, or September 30, 2013.  As a result of her hard work, Senator Barbara Mikulski, Chair of the Senate Appropriations Committee, was able to reach agreement across the aisle and with her counterpart in the House, Congressman Hal Rogers of Kentucky, to add five specific funding measures for the Departments of Agriculture, Homeland Security, Commerce/Justice/State, as well as the two funding measures already passed by the House of Representatives for the Department of Defense and the Military-Construction-Veterans Affairs budgets.  The five specific measures gave greater guidance and in some cases a budget boost to these departments.
Since the Coast Guard is now housed in the Department of Homeland Security (DHS), it received its funding under the DHS appropriation section of the CR.  This includes $10.4 billion for the Coast Guard, an increase of $79 million over last year’s funding, allowing the Coast Guard to continue its acquisition program for new ships and planes and to move its headquarters to the grounds of historic St. Elizabeth’s Hospital in Washington, D.C.’s Ward 8.  FEMA, the disaster relief and grants management arm of DHS, received a total of $2.5 billion for State and Local and First Responder Grants that include the Port Security Grants.
According to DHS sources, these grants are estimated to be between $92 million and $93 million this year.  Finally, Customs and Border Protection (CBP) was funded at $10.4 billion, an increase of $215 million over last year’s level, allowing full funding for border security agents at our southern border.
Unfortunately, due to differences of opinion with some House Members over federal funding for high-speed rail projects in California, the appropriations bill for the Department of Transportation (DOT) was not added to the CR—although DOT remains largely funded at FY2012 levels under the CR.  In fact, for programs that fall under the Highway Trust Fund, the CR includes appropriations consistent with the funding levels authorized by the Moving Ahead for Progress in the 21st Century Act (MAP-21), signed into law last year.
As part of DOT, the Maritime Administration is funded at the FY2012 level minus the five percent cut attributable to sequestration, described below.  Since the Obama Administration has never included funding for the title XI loan guarantee program in its budget, it is unlikely that new funds have been appropriated for this program.  Any new loan guarantees would have to be funded from residual funds.  But, MARAD does have approximately $9 million for Small Shipyard Grants.  Applications are due within 60 days of the President’s signing the CR, or 60 days from March 26, 2013.
Funding for the Energy and Interior Departments, which have responsibility for promoting renewable energy, including offshore wind development, falls within the general terms of the CR, or mostly to be funded at last year’s level plus the sequester cuts.  In addition, Energy’s program to promote renewable energy was specifically cut by $11 million.   As part of the Commerce Department, the National Oceanic and Atmospheric Administration (NOAA) did receive its regular budget.
The budget contains $5 billion for NOAA, which is $111 million above fiscal year 2012, but $50 million below the President’s request.  Senator Mikulski directed that full funding be provided for weather satellites and critical weather predictions.  The budget for EPA continues at FY2012 levels, in general, less the sequester cut.  At this time, we are waiting to learn how much money is available for grants for diesel engine replacement through the popular DERA program.

The Sequester Cuts
On March 1, 2013, federal agencies were hit with a 5 to 7.8 percent across-the-board cut as a result of sequestration.  Sequestration, a term derived from the Budget Control Act of 2011, is a “process of automatic, largely across-the-board spending reductions under which budgetary resources are permanently canceled to enforce certain budget policy goals.” (From the Congressional Research Service March 22, 2013 Report to Congress on Budget Sequestration.)  Originally intended to be an action-forcing mechanism to force compromise during the budget negotiations of 2011 and 2012, sequestration was supposed to administer equally painful cuts to the Defense Department and their supporters and to the nondefense agencies and their supporters.  Unfortunately, no compromise was reached and the cuts have gone into effect.  The total budget cut from sequestration amounts to $85 billion, to be divided between defense and non-defense programs.
Sequestration hits the government with a wide pickaxe as opposed to a surgeon’s scalpel.  With the exception of dispensation granted to the Department of Defense, agency heads have little if any discretion to administer the cuts selectively based on which programs are worth keeping and which should be terminated.  Military personnel were protected from the sequester, but this is not the case for the 800,000 civilian employees of the Department of Defense and millions of other civil servants.  Most of these employees can be expected to be furloughed from 14-22 days before the end of the fiscal year.
The sequester is also having a cascading effect on the private sector who provide services to the military.  For example, shipyard workers in Newport News, VA, may be laid off, hampering work on repairing and maintain our Naval fleet.  (For more information, see the March 28, 2013 report by the PBS Newshour on “Southeastern Virginia’s Military Industry Feels Effects of Sequester.”)
Compounding the impacts of sequestration is the fact that the cuts have to be taken between now and the end of the fiscal year, i.e., in a 6-month period.

The Budget Resolution(s) and Upcoming Debt Ceiling Fight
Now that Congress has “resolved” the budget for the remainder of FY2013, they have to quickly turn to the FY2014 budget, which starts on October 1, 2013.  The House and Senate have passed competing versions of their budget plans for FY2014 in the form of Budget Resolutions.  While the Budget Resolutions do not have the force of law, they do provide guidance for the respective bodies and appropriation committees on what spending to allocate for the upcoming fiscal year.
The Senate Budget Resolution calls for a mix of tax revenues and spending cuts, an approach favored by President Obama.  The Senate Resolution also includes a “$100 billion targeted jobs and infrastructure package...[to create] new jobs quickly [by] repairing the worst of our crumbling roads and bridges and help train our workers for 21st century jobs.”  (From the Senate Budget Committee summary of the FY2014 Senate Budget.)  This package is paid for with eliminating loopholes and “wasteful spending” in the tax code.  (Senate Budget Committee.)  There is no comparable infrastructure proposal in the House Budget that identifies high-speed and intercity rail projects as areas to cut from any federal funding.
The only possible way to reconcile these vastly different visions of the role of the federal government is through a “grand bargain.”  However, the window for reaching such a bargain may only be open until sometime this spring, or perhaps as early as May 19, when the U.S. bumps up against the next debt ceiling—an event that usually focuses the attention of both the White House and Congress.

President Obama’s Budget Proposal for New Infrastructure Funding
The President was supposed to submit his FY2014 budget to the Congress in February, but it was delayed until April 10.  We have seen some hints of what the budget is likely to contain.  During a visit to the Port of Miami on March 28, 2013, the President unveiled some details of his infrastructure funding proposal.
These include a proposed Infrastructure Bank as well as additional funding for the TIGER grant and TIFIA loan programs, both administered by the Department of Transportation.  The President would also create a new bond program to encourage private sector investment in our bridges, rails, ports, and highways.
(For more on the President’s funding proposal, see “Obama Offers Details on Infrastructure Plan But Stakeholders Say Solvency issues Remain,” Bloomberg Government News, March 29, 2013.)
Although a wide gulf continues to separate the House and Senate on the budget, they were able to bridge the difference to fund the government for the remainder of FY2013.  This provides some level of certainty, albeit at reduced levels of funding, to government programs that support the maritime, energy, and transportation communities.  Most grants supporting these interests were not eliminated but were cut back.  The budget battles for FY2014 have just begun.
As long as we have a divided government, we can anticipate a repeat of funding challenges for the next fiscal year.

Joan Bondareff, of counsel at Blank Rome, focuses her practice on marine transportation, environmental, and legislative issues, and represents clients in many industries and state and local governments. Email: [email protected] 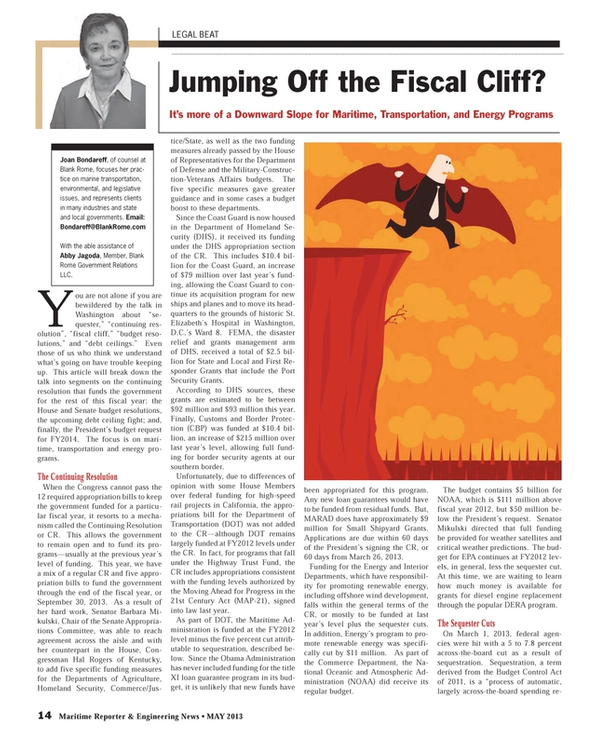 Read Jumping Off the Fiscal Cliff? in Pdf, Flash or Html5 edition of May 2013 Maritime Reporter