Brazil “Rotterdam of the Tropics”

After spending a day exploring the sprawling Açu Superport and Industrial Complex construction site far up the northeast coast of the state of Rio de Janeiro courtesy of LLX and OSX, Claudio Paschoa, Maritime Reporter’s Contributing Editor in Brazil, flew back to Rio for a conversation with Marcus Berto, LLX’s new CEO at the EBX Group headquarters in downtown Rio de Janeiro. “This is a not simply a port belonging to LLX. This is a port for Brazil,” he said.

History and Expectations
LLX is the logistics branch of the EBX Group, the company founded in March 2007 by Brazilian entrepreneur Eike Batista, born eying the strong demand for modern, efficient ports in Brazil. With the start of pre-salt production and the steady stream of new O&G discoveries in Brazil, the current port infrastructure is part of a serious logistics bottleneck which could affect the future of the local O&G industry as well as the industrial growth of Brazil. Case in point is an ongoing port crisis, as this year’s massive harvest of grains is causing traffic jams on roads leading to the Santos Port in the State of São Paulo.
Açu was first pinpointed as a possible location for a port by the U.S. Navy during WWII, according to Berto. He maintains, though, that even back then, the idea was for a commercial port.
Ultimately, though, it was Eike Batista’s selection, who was in search of an export outlet for the EBX Group’s mining company MMX. Following flights up and down the Brazilian coast by helicopter searching for suitable port locations, Açu was chosen. Originally the concept for the port was to be an export outlet for the EBX Group’s mining company MMX, but with the growth of the O&G industry in Brazil, the original vision was expanded.
The LLX Açu Superport is expected to be the largest industrial port venture in Latin America: a private location in the municipality of São João da Barra on the northeast coast of the state of Rio de Janeiro, about 400km from the city of Rio. Occupying a total area of 90 sq. km., the Açu Superport construction process began in October 2007, and it will have an initial tanker channel and mooring depth of 21m (to be expanded to 26m) and the capacity to receive the largest cargo ships in the world. The venture will have two terminals TX1 and TX2, which will handle iron ore, oil, steel products, coal, pig iron, slag and granite (TX1), in addition to liquid, solid bulk and offshore supplies (TX2).
LLX’s strategy for the Açu Supeport is based on having anchor companies investing in the port and industrial complex along with them, said Berto. He said an advantage for companies setting shop at the Açu Superport is the fact that the location already has an environmental license, which in Brazil can take up to five years for approval. The three companies building at the TX2 part of the port; Technip, National Oilwell Varco and Intermoor, had only to wait an average of 80 days for their licenses, according to Berto. “For Brazil, this is a record in license approval time” said Berto.
In short LLX is seeking to create one of the most modern and efficient ports in the world; multiple use for bulk, petroleum and perhaps containerships, helping to revolutionize Brazil’s port logistics outlook and contribute to Brazil’s growth.
“This combination is expected to reflect in lower operating costs, better results and more efficient operations as our clients demand. Some are already christening it as the Rotterdam of the tropics,” said Berto.

TX1
The Acu Superport’s TX1 terminal calls for 17 km of piers, 47 berths and a projected combined import/export volume of 350 million tons a year. Berto said that the 3km bridge leading to the cargo and tanker ship berths will have a capacity to transport 100 million tons of iron ore per year and 1.2 million barrels of oil per day, in addition to product transfers, storage and blending activities, among other services. The bridge and iron ore handling piers, with a current depth of 21m, have now been completed. Spanish company FCC was contracted to build the breakwater to protect the berths and this is scheduled to be ready by the end of 2014, allowing for the start of iron ore loading still in 2014 and the loading of oil at the beginning of 2015.

TX2
The TX2 channel will be 6.5km long, with a 13km wharf line, a width of 300m, and a 600m maneuvering basin capable of handling the largest OSVs at a depth of between 10.5-18m. The works began in August 2011, and the first stage was completed at the end of 2012. The channel currently is 4.8 km long, from which 35.7 million cu. m. of sand have been dredged by Dutch company Boskalis.
Construction of the breakwater at TX2 started in December 2011. The breakwater’s structure will consist of the north and south ends and will have a length of up to 4km, consisting of 42 concrete blocks and 4.8 million tons of stone. The operation began with Boskalis’s vessel Seaway using its dredging equipment to dredge the foundation pits, the first step for laying the concrete blocks that will form the breakwater. The Kugira, Europe’s largest floating dyke, was moored at Porto do Forno in Arraial do Cabo until November 2012, where it produced six concrete blocks. Each block is massive, measuring  66.85m long, 24m wide and 18m high. All six blocks built by the Kugira in Arraial do Cabo have been laid at the north end of the breakwater. The Kugira was transported to Açu in November 2012, where it will continue producing the remaining 36 blocks. The provisional wharf to moor the Kugira has been completed, within the structure of the north end of the breakwater. This is the first time a breakwater has been built in Brazil using floating concrete blocks technology.
The TX2 terminal has a total area of 2 million sq. m., slated for the installation of offshore support industries and is set to become a leading support hub for the O&G industry and offshore E&P operations. This location around 150km from the Campos Basin, (which answers for 85% of Brazil’s oil production) and reasonably close to the pre-salt heavy Santos Basin (around 400km to the south) and Espirito Santo Basin (around 250km to the north), may well place it in a position to help solve some of the logistics bottlenecks which are expected to affect the Brazilian O&G industry in the near future.

Investments
LLX hopes to attract investments of around $26 billion for the port and industrial complex. These investments will come from the company itself and its partners, such as the consortium LLX Minas-Rio which is investing around $15 billion, including investments by Anglo American in a roughly 500km railway line to bring mineral production from the major Brazilian mining state of Minas Gerais to Açu. The LLX Minas-Rio consortium is formed by LLX 51% and Anglo American 49%. LLX Minas-Rio has invested around $500 million in the Açu Superport. According to the contract between the companies, the additional investment in Açu of around $1.15 billion is being made by Anglo American. Some companies are already installed and building facilities at the TX2, such as Technip, National Oilwell Varco and Intermoor, which together are investing to the tune of $1 billion, while LLX Açu is investing around $3 billion, and partner company OSX will be investing another $4.8 billion, so the targeted total investment is already close at hand. According to Berto, LLX recently signed a joint venture contract with the ASCO Group a leading international Oil & Gas services company. They will occupy a location close to the inland tip of the TX2 channel. Marcus is positive that this will be interesting for both companies and also for the offshore support companies present at the TX2. Additional deals to solidify the port’s position include:

•    In March 2013, Wärtsilä rented a 29,300 sq. m. patch along the TX2 channel. Wärtsilä will install a facility to assemble and produce gensets and propulsion products, in addition to offering solutions and services to its clients for the marine propulsion and energy sectors.

•    On November 28, 2012, GE do Brasil signed a contract entailing the construction of a GE industrial plant in the landside area of Açu Superport. To be located in the metal works cluster of the Industrial Complex, GE’s manufacturing facility will have a total area of up to 322,489 sq. m., primarily to serve the oil and gas and power generation sectors.

•    On December 19, 2012, V & M do Brasil signed a deal for the construction of a logistics base in the landside yard of Açu Superport. V & M’s plant will serve oil companies operating in the Campos Basin, offering Just-in-Time storage and supply of pipes and specialist services. The logistics base will be located in the metal works cluster of the industrial complex and will occupy a total area of up to 150,000 sq. m.
In terms of access infrastructure, which is vital to any port and historically problematic in Brazilian ports, the Açu Super Port Project contemplates integration with local transport routes, including the construction of a dedicated 43 km logistics corridor with highways, railroads, power lines and telecommunications connections, interconnecting the Açu Superport adjacent cities and main highways. The port will also feature an ore pipeline 525 km long, with capacity to transport 26.6 million tons of material. One snag is the airport in the city of Campos, which is the large urban center closest to the port. The airport is in need of expansion and modernization, as anyone who has flown into Campos would surely attest.

Petrobras Partnership
It’s no secret that LLX has been through difficult times, with its biggest challenge overcoming skepticism from investors and the financial markets. Local media were quick to tout that Petrobras was out to rescue LLX, with bold letters capping sensationalistic journalistic endeavor. Both companies were quick to deny, yet it certainly wasn’t all that bad for LLX, as its stock price rose in tandem.
In fact, today negotiations between Petrobras and LLX are ongoing, targeting a partnership where Açu Superport facilities would be used by Petrobras as a downstream option for the pre-salt oil. Petrobras’s E&P Director José Formigli was quick to point out that Petrobras’s main pre-salt and OSV base would still be in the Rio port, although it is probable that at least some of the vast support vessel fleet used by Petrobras would benefit from the TX2 facilities.
“The X group is one of the groups we are evaluating for medium and long term projects. This is business, not a rescue. Petrobras can’t do everything, own everything. We want to maximize the use of what others have, paying market rates,” said Petrobras President Graça Foster. The Açu Superport could be considered a political football of sorts, too, as it is considered strategic to the revival of Brazilian ports. With powerful political and corporate forces, it is a story who’s end is still being written.

New Port Laws
Among other significant changes, MP 595/2012 revoked Law 8630/93 (Law of the Ports), creating new Port Laws, with clear rules that give more flexibility to the private sector and also allow state and private companies to work together. The new regulatory framework of the port sector is good news for LLX’s venture, which already has a license from ANTAQ and has applied for an expansion, which is pending a decision. Berto said the new laws are exciting, as it brings a new reality to the private port sector, allowing more leverage to private port and consequently attracting more investors to the sector, while allowing the sector to feel more secure to invest in better infrastructure and labor training along with introducing a more efficient work methodology.
“This is the beginning of a new age for Brazilian ports.” 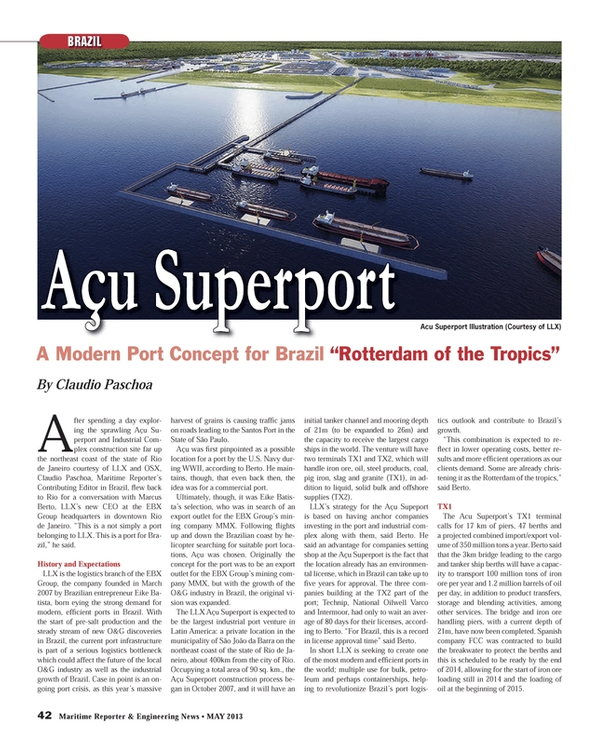 Read Açu Superport: A Modern Port Concept for Brazil in Pdf, Flash or Html5 edition of May 2013 Maritime Reporter