Ron Huibers has been on the job as president of Volvo Penta Region America for just more than six months, but upon entering the position in the autumn of 2013, the goal for the engine industry veteran was clear:  “We have the mandate to grow the business substantially; we want to double the business in the next few years.”
A strong brand in the leisure marine segment, Volvo Penta is now making the moves it believes will help it fortify and extend as a player in the commercial marine engine sector, and Huibers believes that he has the people, the corporate infrastructure and most importantly the products to hit the aggressive sales targets. Volvo Penta is a part of the Swedish Volvo Group, a leading power supplier for the truck, bus, construction machine, industrial and marine sectors to over 180 countries around the world. Huibers, who previously served as the head of the truck division, hopes to leverage Volvo’s technology in those markets to address the needs of the commercial marine market.

Streamlined Operations
Effective January 1, 2013, the company underwent a major restructuring in this hemisphere, folding its Latin American operations into  its North American business unit, creating a single unified organization, for which Huibers now has responsibility for all of Volvo Penta’s commercial marine, leisure marine and industrial engine business from the North Slope of Alaska to the tip of Cape Horn, including the Caribbean, from his headquarters in Chesapeake, Va.
“If you look at the numbers, our business has been up 5% (Volvo Penta America),“ Huibers said. “While it is still well down from historical numbers, I think we are starting to see some firming up and cause for optimism.”
The streamlining of North American operations is designed to provide better and faster service to customers in Latin America from the U.S., whereas previously the Latin American countries fell under the international group based in Sweden. “We are creating a single business unit with commonality in practices, procedures, sales, service and support,” he said. “We have already made important appointments for OEM and aftermarket business in our Latin American operation center in Curitiba, Brazil. We will make additional changes to strengthen our operation, distribution channels and technical support this year.”

The Product
Volvo Penta offers marine diesel engines ranging from 120 to 900 hp, suitable for tugs, commercial fishing craft, pilot boats, offshore supply vessels, inland and coastal ships, as well as a range of auxiliary engines and gensets for commercial applications.
Last autumn the company announced that it had supplied the main propulsion system for the new 60-ft tug Ted Kayser, which was recently delivered to Kathryn Rae Towing of Hahnville, La. The installation was overseen by Allemand Industries, the Volvo Penta Power Center in Harvey, La. The vessel’s two Volvo Penta D16 engines each provide continuous 650 hp at 1,800 rpm. The engines drive a pair of Rolls Royce four-bladed stainless steel propellers through Twin Disc MGX5222 5.04:1 marine gears. David LeBlanc, product manager at Allemand, said, “The D16 engines are ideally suited for tugboats because their low-end torque enables the vessel to start pushing when the rpm reaches 1,100. The result is good momentum from the start at a lower rpm and better fuel economy.”
In addition, Huibers noted a pair of recent commercial marine projects as examples of Volvo Penta’s range of technologies and capabilities. The first is the propulsion systems for six new custom 13.9m (46-ft.) power catamarans, which were built last year for use as course markers and VIP viewing platforms for the America’s Cup racing events.  The vessels were designed by Australian naval architects One2three and built by East Asia Composites.  The boats’ twin Volvo D6-330 engines and IPS450 pod drives are linked to the GPS for automatic precise position keeping when serving as a course marker, even in strong currents and wind conditions. “The captains were very pleased with the Volvo Penta propulsion and dynamic positioning systems, which enabled them to keep the boats precisely on station without anchor lines,” said Helmut Ahollinger, president of Helmut’s Marine Service, the Volvo Penta Power Center in the San Francisco area. “This is a tremendous improvement over the smaller outboard boats used in the past, which needed constant manual maneuvering to hold a steady position. And, unlike fixed buoys, the marker vessels can easily and quickly be repositioned as needed to alter the race course for changing weather conditions.”
The second project is a Volvo Penta diesel-electric hybrid plant for the inland waterway tanker MTS Duandra, which was commissioned last year in Benelux. The ship’s two standard Volvo Penta D16 MG gensets generate power for on-board electricity, thruster, cargo pumps and two electric engines which are part of the propulsion system. The propulsion system consists of a 750 hp Volvo Penta engine connected to a MMW1700 gearbox. On the gearbox a 475 hp electric motor is also connected, and together they can drive the 1,225 hp designed propeller to full speed on request. The propeller can be diesel-electric, diesel-direct or combined driven, so the skipper can always find the most efficient way of propulsion and has a lot of redundancy which guarantees an almost 100% uptime of the ship. This setup, according to the manufacturer, reduces the total installed diesel power on-board by approximately 30% compared to a conventionally built ship. The savings made were used to invest in the extra electric equipment, catalytic converters and particulate filters on all the D16 engines. By using this technique the NOx emissions are reduced by 70-90% and particulates are reduced by about 40%.
Building and maintaining a technically advanced line takes considerable R&D investment, and while Huibers would not share specific dollar amounts, he indicated the company has a long and strong history of investing in future tech.
Our core values are quality, safety and environmental care,” Huibers said. “When the truck buiness collapsed 66%, our company didn’t pull back, it doubled down on its R&D investment and we came out ahead. Today Volvo Penta is investing heavily in R&D to reduce emissions and fuel consumption and minimize downtime in its commercial marine engines.
“With our SCR and DPM filtration technologies we are in conformance with EPA Tier 3 standards in our marine diesel engines,” he said. “We are already supplying Tier 4 engines for industrial applications. In fact, we have Volvo Penta Tier 4 industrial engines powering heavy machinery in underground mines, which have some of the world’s most stringent clean-air requirements, so we understand what it takes to meet emission standards with our marine diesels.”

LNG in its Future?
While the marine operators are starting to move towards the use of LNG as fuel onboard ships of varying sizes, Huibers is not ready yet to coronate LNG technology, citing a number of obstacles and challenges inherent with the fuel and ancillary systems on the vessel and shoreside.
“As part of the larger Volvo Group, we have access to the tremendous R&D facilities of the larger organization, which is actively launching LNG, DME, hybrid and other alternative fuels for trucks, buses and construction machines. While LNG is less expensive and has considerable potential to reduce emissions, we do not believe it will replace diesel as the fuel-of-choice in the near future,” Huibers said. “There are enormous barriers to the widespread use of LNG as a marine fuel, in terms of the infrastructure required to produce and distribute to the market. The handling costs of LNG are high. We will keep a close eye on developments and will bring new alternative-fuel products to market as warranted by demand, timing and technology.” 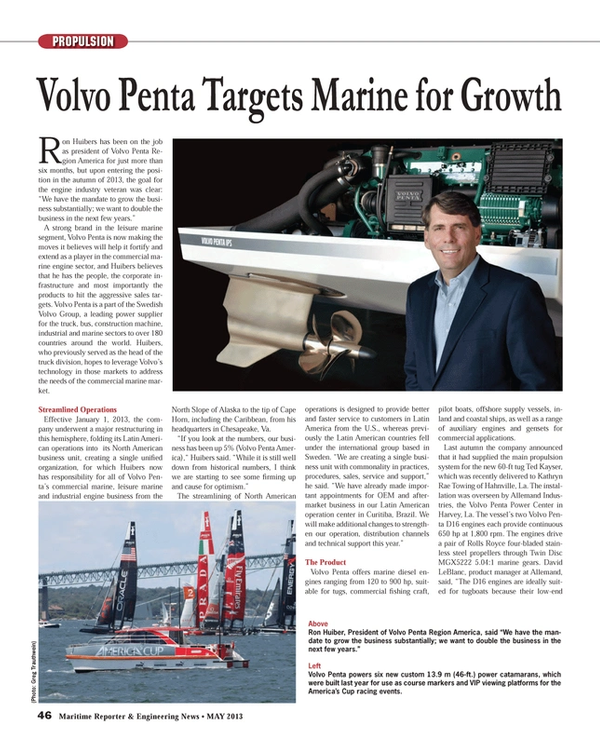