Current Inventory
In total, 320 oil/gas floating production units are now in service, on order or available for reuse on another field.  FPSOs account for 65% of the existing systems, 78% of systems on order.  Production semis, barges, spars and TLPs comprise the balance.  Total oil/gas inventory is the same as last month – but three units on order were completed and are now in the active inventory.
Another 29 floating LNG processing systems are in service or on order.  Liquefaction floaters account for 17%, regasification floaters 83%. No liquefaction floaters are yet in service – all 5 are on order.  Total LNG inventory has increased by two units since last month.
In addition, 102 floating storage units are in service, on order or available.

Production Floater Order Backlog
Sixty-five production floaters are currently on order, a reduction of three units since last month.  The figure includes 38 FPSOs, 11 other oil/gas production units and 16 LNG processing units.  In the later are 5 floating liquefaction plants and 11 regasification terminals.
The backlog includes a speculatively ordered liquefaction floater – the first such order since the ill-fated FlexLNG multiple FLNG contract with Samsung in 2007.  In late May Golar LNG contracted with Keppel Shipyard to convert the 39 year old LNG carrier Hille to an FLNG.    The converted unit will have capability to produce 2.2 to 2.8 million tonnes of LNG per year and have storage for 125,000 m3 of LNG.  Keppel has subcontracted with Black and Veatch to design and engineer the topsides plant utilizing B&V’s PRICO technology.
Capex for the FLNG, including conversion and site commissioning, is expected to be in the range of $1.2 billion.   This works out to an initial cost of $430 to $545 per tonne of annual LNG capacity.   Given the estimated capex, Golar expects to realize an EBITDA payback of 3 to 5 years on a 5 to 8 year contract.    Funding of initial milestone payments will be from the proceeds of a June 2014 public offering of 12.7 million shares of common stock.   For the overall project Golar plans to raise 10 percent of the project capex from vendor participation.  The Golar FLNG is scheduled for delivery within 31 months from contract signing – which would be at end 2016.
Golar has been looking at various projects for the new unit.  The firm is focusing on offshore fields with relatively small reserves of clean natural gas and sites that enable use of the unit with relatively small infrastructure investment.   According to Golar, multiple MOUs for the unit have been executed and definitive agreements are under discussion in North America and Africa.    But the firm says the “execution model remains relatively complex.”
Also now in backlog are two new floating regasification projects.   One of these involves use of an LNG regas carrier as a terminal in Egypt.  The unit will be positioned at a jetty in Ain Sukhna, an industrial port on the Red Sea.  Hoegh LNG will lease the newly built Hoegh Gallant to EGAS for 5 years for the project.  Finalization of the deal is still pending as of beginning July.
The second regas floater is being supplied to Petrobangla for use as a regasification terminal in Bangladesh.  It will be moored offshore Moheshkhali Island in the Bay of Bengal.   Excelerate will design and construct the facility and supply the FSRU under a 15 year charter.
The backlog of units on order has declined over the past two years.  But the current backlog is still very strong in the context of the past two decades.   As shown below, it is the fourth highest mid-year backlog since 1996.

Backlog of Planned Floater Projects
In total 226 floating production projects are in various stages of planning as of beginning July.  Of these, 58% involve an FPSO, 13% another type oil/gas production floater, 23% liquefaction or regasification floater and 6% storage/offloading floater.  Among the new projects emerging since last month is a possible FLNG project in the Russian sector of the Barents Sea.   The proposed FLNG would have 2.6 mtpa LNG production capacity and be used to liquefy/export gas from the Nenets region in northern Russia.  A land plant in Indiga plus barge offshore with LNG storage/offloading capability is an option to the FLNG.
Brazil, Africa and SE Asia continue to be the major locations of floating production projects in the visible planning stage.  We are tracking 44 projects in Brazil, 48 in Africa and 39 projects in SEA – 58% of the visible planned floating production projects worldwide.  Several large projects in Brazil and (less so) Africa will require multiple production units. Around 13% of the 226 visible planned projects are likely to advance to the EPC contracting stage within the next 12 to 18 months.   These near term projects typically have either entered the FEED phase, pre-qualification of floater contractors has been initiated or bidding/negotiation is in progress.
Another 50% of the visible projects are at a stage of development where the EPC contract for the production unit is likely within the next 18 to 60 months.   The remaining 37% of projects are less advanced in planning, with the EPC contract likely 5 to 10 years out.
We looked into the type mooring system likely to be utilized on projects in the planning stage.  Based on what is known at the moment, around 30% will utilize a spread mooring system, 20% will utilize an external turret, 15% an internal turret.  Another 20% could utilize a spread mooring or turret system.   The remaining 15% will be jetty moored FSRUs, tendon tensioned TLPs, a few DP FPSOs and several relatively simple SPM, yoke or chain mooring systems.

Near Term Outlook
The ordering pace to date this year has met expectations.   Orders for 11 units have been placed through mid-year.   They include 2 FLNGs, 5 FPSOs, 1 gas/condensate barge and 3 FSRUs.   On an annualized basis, the ordering pace equates to 22 units per year.   This is within the order forecast we made in January – where we forecast orders for 20 to 30 units annually over the next five years. The second half of 2014 looks even stronger.  At least a dozen projects are ready to move to the EPC contract stage by year end – and underlying market drivers for the investment commitment are very positive.
In particular, crude pricing remains strong.  Prices are being supported by increasing energy demand and uncertainty about supply sources.  Brent is trading around $112 on the spot market, $98 at the end of the decade in the futures market.  This pricing level provides solid commercial support to all but the most marginal deepwater projects.  Rystad Energy, for example, has estimated that the 30 major deepwater projects coming online between 2014 and 2020 will require an average Brent price of $65 to breakeven.   The least economic project among the 30 will require $72 to breakeven.

IMA provides market analysis and strategic planning advice in the marine and offshore sectors. Over 40 years we have performed more than 350 business consulting assignments for 170+ clients in 40+ countries. We have assisted shipbuilders, ship repair yards and manufacturers in forming a a plan to penetrate the offshore market.  Our assignments have included advice on acquiring an FPSO contractor, forming an alliance to bid for large FPSO contracts, satisfying local content requirements and more.
t: 1 202 333 8501 / e: [email protected] / w: www.imastudies.com 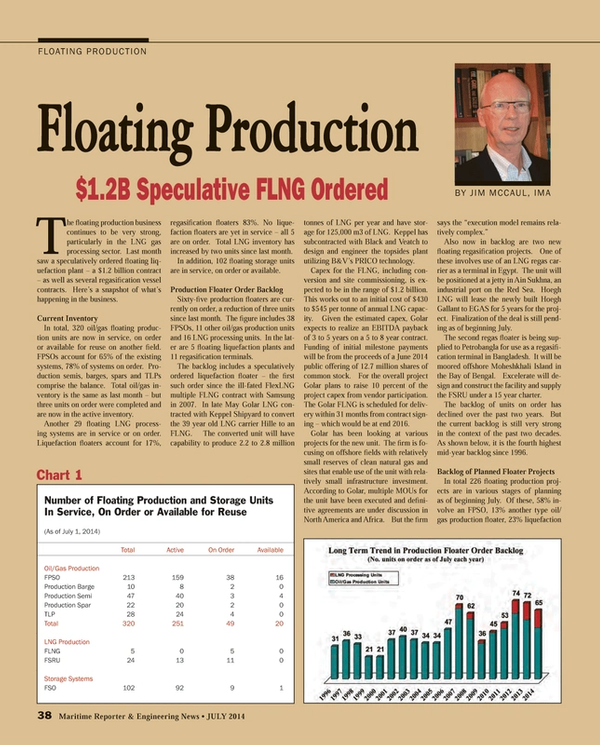