Editorial: Gas ... It's Both the Question & the Answer

When the time comes to pull an edition together, sometimes the content simply takes on a life of its own, as is the case with the July 2014 edition and the proliferation of ‘gas’ throughout. While the advent of gas and all that this little word encompasses is hardly breaking news, to put it in context we literally are in the infancy of a historic course correction that will last generations.
Following up on last month’s interview with Edward Scott, COO of Excelerate Energy (www.marinelink.com/news/excelerate-energy-year371540.aspx) this month Patricia Keefe, via the seventh installation of her “75th Anniversary” series of features for our pages, provides a top to bottom, inside and out profile of the FLNG Prelude, a revolutionary technology taking shape in South Korea that raises the bar many times over in both the maritime and energy sectors. In a word this project is awesome in size and scope, as I think you will agree after reading the story which starts on page 30.
While historic, the FLNG market does not start and end with Prelude, as Keefe notes in her article there is plenty of competition lining up to make the next, biggest splash.
In fact, in Jim McCaul’s monthly report on the burgeoning Floating Production sector, he reports that recently a $1.2B FLNG has been ordered on spec. While the Floating Production market has been dented with the proliferation of shore-based oil and gas finds, the sector remains vibrant and appears to have long legs as the technology has improved to discover and recover resources that previously were deemed impossible or uneconomical to develop. Find out more on this dynamic, growing and high-value sector courtesy of McCaul’s insights, starting on page 38.
Now that it appears we have an abundance of cheap, clean fuel for the future, talk and action has turned to the use of LNG as a fuel for boats and ships. While the jury is still out on the breadth and depth that LNG will penetrate as a mainstream maritime fuel, it is plain for all to see (and feel, on the bottom line that is) that the mandate to make your marine operations cleaner and more environmentally benign is here, it is now, and it is only going to get more restrictive and expensive.
Peter Pospiech, our technical contributor from Germany delivers an insightful look (starting on page 26) at Color Line and its efforts in retrofitting its modern ferries with exhaust aftertreatment scrubber technology in its mission to meet and beat new emission rules. 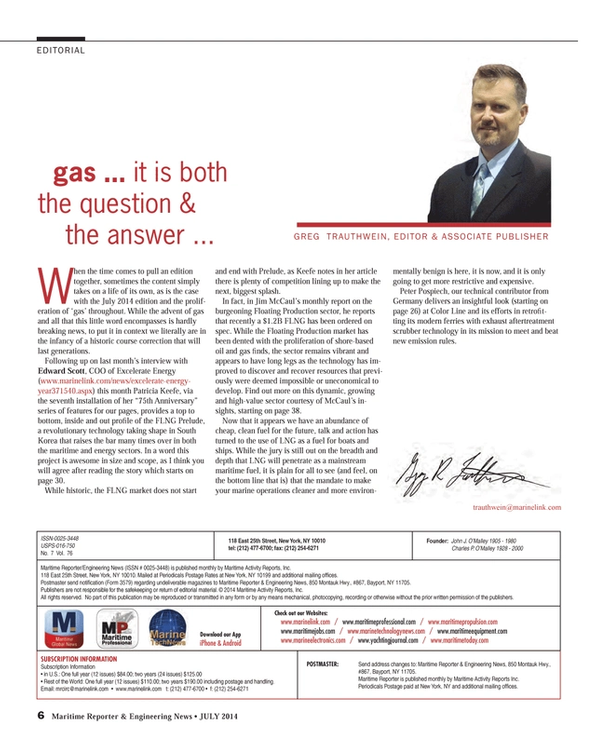 Read Editorial: Gas ... It's Both the Question & the Answer in Pdf, Flash or Html5 edition of July 2014 Maritime Reporter