Harnessing the Wind for Auxiliary Propulsion

Finnish marine engineering company Norsepower Oy Ltd. announced that it will bring to the commercial maritime market an auxiliary wind propulsion solution aimed at maximizing cargo ship fuel efficiency, with first sea tests on a Finnish cargo ship slated to begin later this year.
Norsepower’s Rotor Sail Solution is an updated version of the Flettner rotor, a concept that dates back to Finnish engineer Sigurd Savonius in the early 1900s. The Flettner rotor gets its name from German engineer Anton Flettner, who was the first to build a ship which used spinning vertical cylinder rotor sails for propulsion.
Though the basis for this technology is not entirely new, Norsepower has modernized the concept with various improvements. Norsepower said its update uses improved technology, advanced materials and a leading-edge control system to allow the main engines to be throttled back when wind conditions are favorable, providing average fuel savings in the range of 5-30% and reduced emissions, while sustaining the power needed to maintain speed and voyage time.
The principle on which the Norsepower Rotor Sail operates is known as the Magnus Effect. When wind meets the spinning rotor sail, airflow is accelerated on one side of the rotor sail and is restricted on the opposite side. The resulting pressure difference creates a force that is perpendicular to the wind flow direction – a lift force. The circulatory flow, created here by the skin friction, is the same phenomenon that creates lift for an aircraft wing. The same principle applies to rotating spheres and cylinders.
The thrust induced by the Magnus Effect can be utilized in ship propulsion by placing a cylinder on the open deck of the vessel and by rotating it around its main, vertical axis. An electric drive system that is powered by the auxiliary grid in the vessel is used for rotation of the rotor sail. Norsepower claims that this solution has potential to be 10 times more efficient than a conventional sail because more lift is produced with a much smaller sail area.
The solution is mainly intended for use aboard tankers, bulk carriers and RoRo vessels and can be installed on newbuilds or retrofitted to existing ships.
According to Tuomas Riski, CEO and partner of Norsepower Oy Ltd., there are presently more than 20,000 merchant vessels worldwide that are suitable for retrofit of the Norsepower Rotor Sail Solution and can benefit from its reduced fuel consumption.
Sea tests will begin later this year on Bore’s Finnish-flagged 9,700 dwt RoRo ship M/V Estraden after the completion of land-based testing on an assembled prototype of the Norsepower Rotor Sail at the developer’s facility in Naantali, Finland.
“Norsepower aims at being the first company to have an industrially piloted and certified auxiliary wind propulsion product, which is delivered as a ready-made solution,” Riski explained. “The pilot project with Bore is a significant step on our path towards the market leadership of cargo vessel auxiliary wind propulsion systems.”
Håkan Modig, CEO of Bore Ltd. said, “Bore is in the forefront in using environmental and energy efficiency solutions for sustainable shipping. To pilot such a system on our vessel M/V Estraden is a natural step as we have supported the project from the start. Also, Bore is happy to encourage new entrepreneurs within this area in Finland and we are pleased to see that the project is ready for launch.”
Essential parts of the Rotor Sail Solution include two or more rotor sail units installed on deck to deliver the forward thrust, wind and GPS sensors to provide the automation unit with real-time wind speed and direction information as well as ship speed and course data, control panel for the captain’s full control of the operation and performance of the Norsepower Rotor Sail Solution, an automation unit for optimized forward thrust of the rotor sails and a power supply from the grid of the vessel to the electric motors that power each rotor sail.
The required number of Norsepower Rotor Sails and the size of each sail are based on the size, speed and operating profile of each vessel. Norsepower Rotor Sails are available in three sizes with different heights of 18, 24 or 30 meters. The Norsepower Rotor Sail Solution is typically delivered as a full-service solution that includes both delivery and maintenance of the hardware and software components. Norsepower said it has gathered nearly $3 million of funding since its establishment in 2012 for the development, testing and piloting of the Rotor Sail Solution. Main investors behind Norsepower are Lifeline Ventures Oy, Finnvera Oyj and Wate Oy; Norsepower is also funded by Tekes. Norsepower’s website lists additional as partners ABB, Alandia Insurance, Beckhoff Automation GmbH, Bore, Elomatic, FY-Composites Oy, Lloyd’s Register Group Ltd., LST Group, Paramet, SKF, SKS Group, Turku Repair Yard Ltd., VAF Instruments, Vaisala and VTT Technical Research Center. 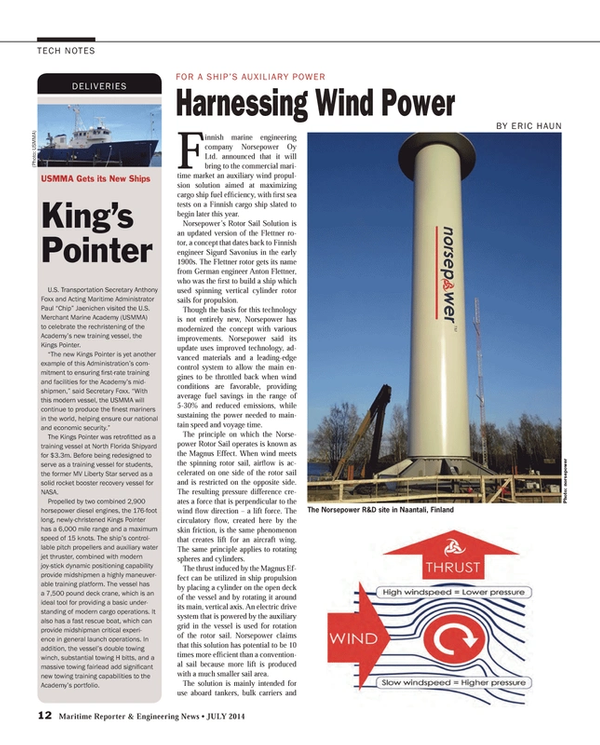