FLNG Prelude: A New Dawn in the Age of Maritime & Energy


No Pain, No Gain
Before Shell can hope to reap FLNG’s many anticipated advantages, it must first surmount some very big challenges, not the least of which is force-fitting an entire LNG processing plant onto what some have likened as a “barge” in the middle of the ocean.
Shell had to find a way to adapt its shore-based technology for a much smaller, floating platform. This was solved in part by stacking components on deck vertically to save space.
A related solution kills two birds with one stone. Shell plans to eliminate the need for some components on deck by extending eight 1-metre-diameter pipes to a depth of 150 meters, in order to pump frigid seawater up to help cool the gas – 50 million liters (50,000 cubic meters an hour.
Safety is a huge big concern on multiple fronts, and Shell executives have stressed that Prelude’s design centered on minimizing risk.  Its environmental approval requires it to have a oil spill contingency plan for a potential uncontained spill that would last 11 weeks, as well as a monitoring plan in the event of a spill, to determine the impact on ecosystems. The design addresses other risks.
First, gas is explosive. Shell will deal with this in part by using inert (non-flammable) gases in its processes, by separating each of the modules a set distance apart to limit chain reactions in the event of an incident, and by putting the accommodations on the opposite end of the ship away from the turret where gas is brought in.
Once the processing plant moves offshore, “sloshing,” which creates a force that can significantly damage the walls of the storage tanks, becomes a major concern. Since the tanks aren’t always full, and the ship is always moving up and down in the water, sloshing can be a constant concern. Shell is addressing this via a special membrane LNG tank designed to help predict, and help endure, the force of sloshing.
Movement also comes into play when trying to transfer the liquefied gas into an LNG carrier tank. To aid offloading there are three 6,700hp thrusters, which can adjust the position of the FLNG in relation to the carrier.
Shell also had to marinise process equipment such as absorption columns and the main cryogenic heat exchangers to ensure their operation under marine conditions, and ability to accommodate  movement in the structure.
And there’s the fact that Prelude will be sitting out in the middle of nowhere in cyclone alley central. Shell has no intentions of untethering the facility every time a bad wind blows and towing it to shore. Instead, a number of factors are supposed to ensure that Prelude sits tight in savage seas.  First there is its sheer size and weight. But more important, Gilmour claims Prelude’s mooring system can stay on station even in the face of a category 5 hurricane.
Four groups of mooring lines will be attached to the world’s largest (93 meters) mooring turret on one end, anchoring the facility, via connections to suction pile anchors, to the ocean floor on the other.  The swiveling turret turns slowly with the wind, reducing the impact of water and weather conditions. The links in the record-setting mooring chains are said to be large enough to stand inside of .
Meanwhile, the offloading of LNG onto an LNG carrier required the design of a special loading arm system with swivel joints and quick connect/disconnect flanges, capable of offloading both LNG and LPG.

How It Works
The Prelude plant will include 7 wells, four flow lines approximately 4 km in length, umbilicals and flexible risers, as well as the FLNG facility.  The management of subsea wells and manifolds is carried out via the umbilicals, which are connected to a control rom. The plant itself is comprised of liquefaction units, production storage (with capacity of 436,000 cubic meters of LNG, plus LPG condensate) and loading facilities, utility systems, control room, maintenance facilities and accommodation.
It will sit on top of the gas field where a series of wells will feed gas and condensate from the reservoirs via four flexible risers into the facility that will draw gas up into the turret for processing. Next, the LNG has to be separated from a mix that included condensate, LPG, water and CO2. After which the LNG will be liquefied, using Shell’s Dual Mixed Refrigerant (DMR) process, which uses steam-driven refrigerant compressors and ultra-cold seawater to chill the gas to –162°C, shrinking the volume by 600 times. Stored in tanks in the hull with an overall capacity of over 430 million liters (114 million US gal), it will be transferred by special loading cryogenic arms to tankers moored next to the facility.
A key feature of Shell’s FLNG design will be its flexibility.  It will be able to process a wide range of gas compositions, accommodate a wide range of sub-sea configurations, offer multiple solutions for hydrate management, export LPG as well as LNG, and will use a dual-mixed refrigerant liquefaction cycle.
The FLNG facility to be used for Prelude is generic in design, following Shell’s “design one, build many” approach, meaning that the facility can be easily replicated for other projects, and more importantly, customized for different gas field conditions and contents.
Although Shell like to say it has innovated using tried and true techn0ology, in fact, the FLNG concept remains untested. Certainly the market can look to the FSOP sector to get an idea of the process, but for the most part, Shell’s competitors and partners will be watching closely to see how closely Prelude hews to budget and hype. If  all goes to plan, however, the FLNG market is set to explode. 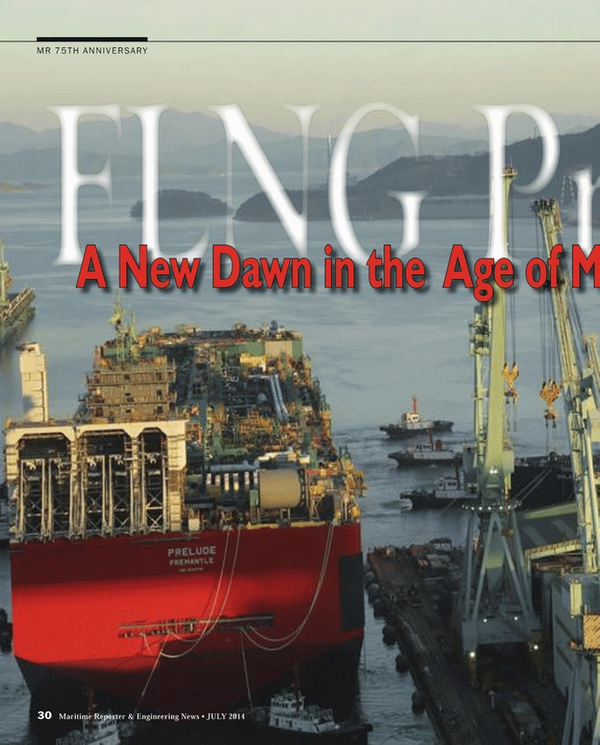 Read FLNG Prelude: A New Dawn in the Age of Maritime & Energy in Pdf, Flash or Html5 edition of July 2014 Maritime Reporter