Desulfurization of Exhaust Gases in Shipping

Due to existing regulations on air exhaust emissions from the International Maritime Organization (IMO), and with the European Union working towards an alignment with IMO MARPOL Annex VI, the marine industry will need to choose a path on how to achieve compliance, a choice that will have tremendous impact on shipping.
Legislation has already had an effect on the fuel markets in regulated areas, as fuel prices are expected to increase even further in 2015 when the 0.1% fuel sulfur limit enters into force.
As an alternative to use low sulfur fuels (Diesel or Natural Gas), the Finnish company Wärtsilä, as well as others, has developed exhaust after treatment systems which are already in use.

January 1, 2015
By this date all diesel engines of all sea-going vessels in the area of the entire North- and Baltic Sea, the English Channel and as well in a 200 nautical miles zone along the U.S. Atlantic and Pacific coast line, must be operated either with fuels whose sulfur content is equal to or less than 0.1 percentage by weight, or equipped with an exhaust after treatment device which ensure a corresponding low sulfur emission. Unlike most other adopted portfolios from IMO, this regulation is valid not only for new but also for all in use existing seagoing vessels.
The sulfur content in ship fuels has been defined at 3.5 percent and it is intended to be reduced to 0.5 percent by 2020. With a view to “availability,” the mineral industry still has loopholes, and the binding introductory date of this limit can be shifted to 2025.
The 0.1 percentage by weight sulfur content within the SECA’s will come in force in the beginning of 2015, and the resulting technical consequences for diesel engines have been discussed widely during the last several years. To what extent shipping companies have now adjusted is not easily known. However it is clear that no matter which technical solution is chosen, ship operation in the SECA’s will be significantly more expensive.
The Norwegian cruise and transport shipping company Color Line together with Wärtsilä recently introduced its fleet retrofit program with scrubbers to reduce the sulfur emissions.
As the Color Line’s vessels operates solely on the Baltic Sea, they focused on three alternatives before they ordered scrubbers from Wärtsilä:
•    Conversion of the engine operation from heavy fuel to gas oil, which may be the simpliest but, because of the significantly higher fuel price, is an expensive solution.
•    Conversion of the engine operation from heavy fuel to natural gas: This is an available technical solution and gas supply in Norway is plentiful, but it is ahigh investment costs to convert the engines and the infrastructure on board.
•    Continue engine operation with inexpensive heavy fuel which means installing a scrubber systems.
Each of the solutions have their pros and cons, and at this stage it is not possible to make a fair comparison, particularly given the historical and likely future fluctuation in fuel pricing. But in the big picture, the fuel price certainly has a considerable effect on the decision.
With respect to the scrubber solution Wärtsilä says “this leads to the lowest lifecycle-costs, however the amortization depends of the price differences between heavy fuel and gasoil with a low sulfur content of 0.1 percent.”

Development of Scrubber at Wärtsilä
Wärtsilä has a long and noted history in the development of its scrubber system, which was working as a closed loop systems with freshwater and caustic soda. In fact it was a pioneer among engine manufacturers in the ability to supply certified equipments.
After Wärtsilä took over Hamworthy it was then able to own a scrubber system which works on a open loop method, without any chemical additives, operating with sufficient alkaline seawater. The decisive factor for the use of the open loop system are the alkaline properties of the respective seawater. If this is not sufficient, a hybrid system must be used. Indeed, this is a flexible, but at the same time also a complex and corresponding solution, which is only relevant for vessels whose area shows big differences in respect to the alkalinity of the seawater. As of March 2014 Wärtsilä had goods on order to equip 45 vessels for a total of 94 exhaust gas cleaning systems for both newbuild and retrofit projects –representing more than one-year of production.

The Color Line Decision: Seawater
Color Line opted in favor of scrubbers, which operates with seawater in the open loop system, representing an investment of nearly $40.7m. The goal is a reduction of the harmful emissions. However, the installation of scrubbers from Wärtsilä removes up to 98% of SOx from vessel emissions and reduces harmful particulate matter by up to 85%, meaning that the ferries can operate using conventional bunker fuel. The four separate Wärtsilä open loop scrubber systems will ensure the ship’s full compliance with the International Maritime Organization’s (IMO) MARPOL Annex VI regulations, and with EU Directive 2055/33/EC.
The first ferry to be retrofitted is the Color Line Super Speed 2, which will be carried out in April this year. In January 2015 follows the Color Line Super Speed 1, Color Magic and Color Fantasy. All works will be carried out in a Danish shipyard.
The viability of scrubbers has been acknowledged by the IMO, the European Union, and in February 2012 by the U.S. Environmental Protection Agency and most recently by the British Parliament. In addition, extensive testing is performed upon each newly installed scrubber system to ensure that they are able to meet the demands placed upon them by the varying operational conditions that they will be working in. As increasing numbers of scrubbers are being installed and the industry’s understanding of their ability to achieve compliance develops, confidence in scrubbers continues to grow.
In the following a short view on the ferries main propulsion system, which will be retrofitted with scrubbers: Color Magic and Color Fantasy feature each four 8-cylinder diesel engine of type 46B (output 4 x 7.800 kW @ 500 rpm). Both the ferries are  of CCP propeller design.  Each shaft features two engines which are mounted on both sides of one Renk MAN gearbox. Each main engine will get one own scrubber. The diesel engines of the on-board gensets will stay as they are – without exhaust gas cleaning system. They must therefore operate on gas oil, not only in ports where there is no shore-power supply available, but also during sea voyage. The Super Speed ferries feature the same propulsion system: each two twin-diesel engines from Wärtsilä of the same type. 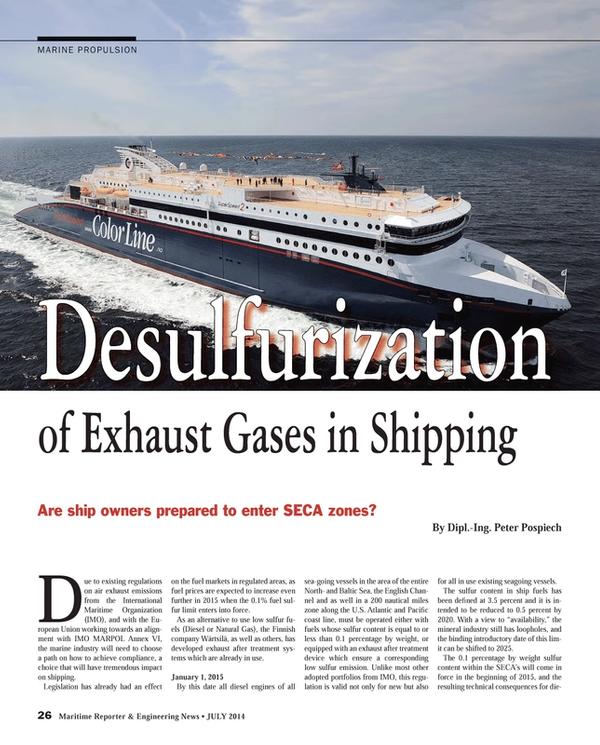