When TOTE announced plans to build the world’s largest LNG powered containerships, it stood to reason that along the way many milestones would fall. The most recent came when Doosan Engine delivered the world’s first dual-fuel, low-speed ME-GI engine to NASSCO in San Diego. The engine is built to operate on LNG and/or bunker C oil and will power the first of two 3,100-teu container ships ordered by TOTE.
The Korean engine maker originally won the order to build the ME-GI engines in 2013. On June 3, 2014, Doosan Engine completed the engine’s official trial run in the presence of the shipowner, shipyard, and classification society representatives. Doosan Engine also tested the ME-GI’s Fuel Gas Supply System (FGSS), which has 300 bar of operating pressure, at its Changwon plant. At the culmination of two months of testing, the gas system had passed all regulations and restrictions as regulated by ABS and USCG.
The TOTE ME-GI engine will primarily operate on LNG, and the ME-GI is positioned as a next-generation, eco-friendly engine, which reduces carbon dioxide, nitrogenous compound, and sulfur compounds compared to existing diesel engines.
The TOTE contract provides for the construction of two newbuilding, state-of-the-art containerships – with an option for three more vessels – for domestic services. Each ship will be powered by a single 8L70ME-GI dual-fuel gas-powered engine. The two 3,100 TEU vessels are  powered primarily by LNG, and will operate between Florida and Puerto Rico.
The ME-GI engine is designed to give ship owners and operators the option of using either HFO or gas – predominantly natural gas. An ME-LGI counterpart is also being developed that uses LPG and methanol. MAN Diesel & Turbo sees significant opportunities arising for gas-fuelled tonnage as fuel prices rise and modern exhaust-emission limits tighten.


Last month at Posidonia SKF Blohm + Voss Industries launched the Turbulo BlueMon emission monitoring system, a system that is designed to record all emissions on board ships via a single system. But the system takes the role of monitoring and control a step further, perceived necessary in today’s climate of varied world emission zones, as the system couples these values with the vessel’s position data based on GPS signals, facilitating compliance with regulations and makes possible auditing and verification of emissions from ships.
Sea areas that are subject to other regulations, such as the U.S. Vessel General Permit 2013, are stored in the system, and thanks to the GPS link it is clear (and recorded) where and when which emissions are emitted. The data remains available for at least 24 months.
SKF Blohm + Voss has engineered the system with a modular design so that it can be individually configured as needed. The standard specification of the system comprises a central data logger connected to a PC. Depending upon the customer’s requirements a software package can be provided for each of the Annexes to the MARPOL regulations, which will monitor the respective emissions.
www.skf.com/marine
www.bv-industries.com 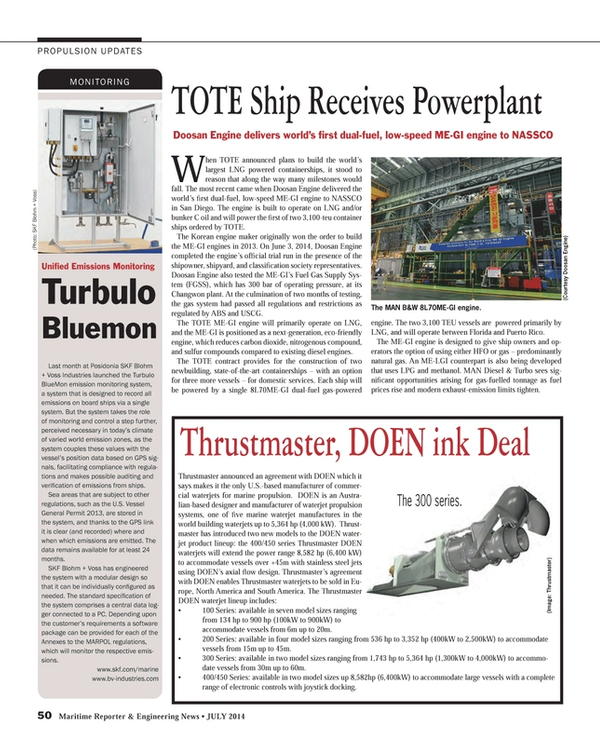