While Posidonia is well regarded for its exhibition, it is famous for its parties. The American Club held its traditional party on the evening of Thursday, May 29, to mark the start of Posidonia week, with more than 600 guests from the club’s expanding Greek membership, as well as club directors and representatives from the Greek maritime industry, attended a buffet reception on the rooftop of the Royal Olympic Hotel in central Athens.
The occasion proved to be an ideal opportunity for the club’s leading underwriter, Stuart Todd, to say his farewells to the Greek shipowning community, in which he has been a prominent P&I figure for more than a generation, ahead of his official retirement on June 30. He leaves the insurance market after more than 40 years’ distinguished service within the P&I world. However, he will continue as a consultant to Shipowners Claims Bureau Inc., based in London.
Todd joined SCB in the autumn of 2001, having previously held senior positions with a leading International Group P&I club and at Lloyd’s of London. He moved to head office in New York in early 2002 to assume chief responsibility for the American Club’s underwriting operations.
Speaking at the Athens reception, Joe Hughes, chairman and CEO of SCB, said that Stuart Todd commanded great respect within both the shipping and insurance communities, especially those in Greece. He had made a great contribution to the club’s strategy of growth and diversification. He left a legacy of considerable achievement, not only through the growth in premium and tonnage, but also in the diversity of membership, which gained impetus during his 13 years with the club. He had been instrumental in building a strong team to enhance the club’s underwriting capabilities both for the present and for the future. 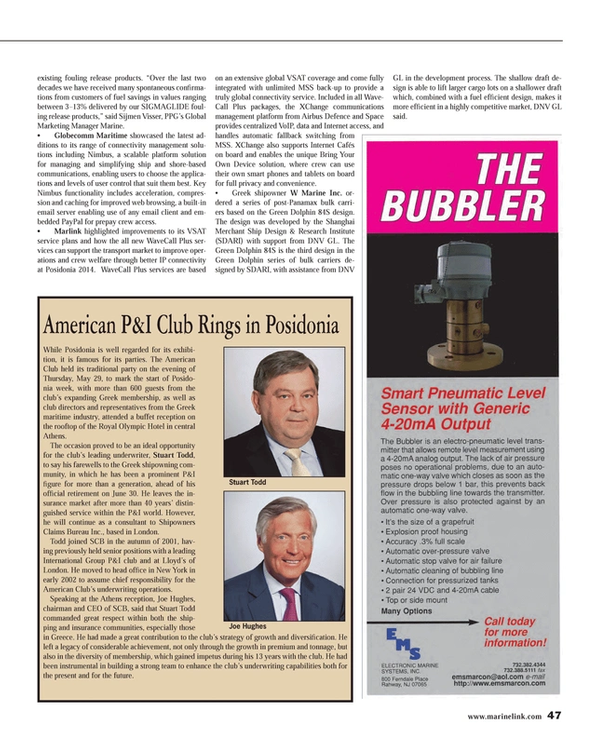