By Alan Weigel and Richard Singleton

Electronic navigation systems such as GPS, Electronic Chart Displays (ECDIS) and Automatic Identification Systems (AIS) provide great assistance to mariners and significantly contribute to navigational safety.  Voyage Data Recorders (VDR) were specifically designed to collect data from these electronic navigation systems and other onboard sensors for use in accident investigation. These systems provide investigators with a wealth of data about a vessel’s movements and status in the moments leading up to an accident.  They also have what likely is an unintended consequence: electronic navigation data is now frequently presented as evidence in the litigation that often follows maritime accidents.

The Court’s View on Electronic Navigation Evidence
By 2004, AIS and VDRs were in common usage on most vessels.  Thus, by 2007, a court commented that AIS was a “notable development” that may affect the way vessels communicate in the future.  Since 2007, although one court found that AIS data was “not conclusive evidence of individual vessel movements,” the trend is for courts to increasingly rely on navigation data from AIS and VDRs.  In a case in 2010, a court noted that the “authenticity and accuracy of the VTS/AIS recording was not disputed.”  Since that decision, recordings from electronic navigation equipment has been presented as evidence of vessel positions and movements in at least 11 reported cases.  In each case, the court accepted electronically recorded evidence with little or no question.  In large part, courts have accepted the reliability of electronic navigation data largely because the carriage requirements for electronic navigation systems are well established; their use is widely accepted by the maritime industry; and the systems are generally seen as an extension of existing technology.  And importantly, counsel trying cases have themselves become comfortable with the technology and have learned how to effectively present electronic navigation evidence while convincingly explaining the inevitable anomalies and inconsistencies.

Accident Investigation & Litigation
Maritime cases were traditionally presented through paper log books and mariners’ eyewitness testimony, with occasional printouts from course recorders and engine telegraph loggers.  There are inherent limitations, however, in the reliability of the testimony of even the most truthful eyewitness.  For example, determining a vessel’s precise position in a channel or seaway by reference to shore side structures – even when based on fixes – is subject to considerable margin of error.  In addition, witnesses often give conflicting versions of events.  In the confusion that usually attends a maritime accident it is not expected that witnesses will exactly concur in their descriptions of what they observed.  Thus, it is not uncommon for mariners, said to be traditionally loyal to their vessel, to give irreconcilable testimony with respect to their vessel’s courses and speeds during the navigational maneuvers preceding every collision at sea or other maritime accident.
Data from e-navigation systems, however, can foreclose these typical disputes and resolve the so-called “irreconcilable testimony,” often resulting in early and/or favorable resolution while avoiding litigation costs.  Such data can also help reduce the costs of producing witnesses to testify as to events that are readily established by the electronic data.  Producing data from e-navigation systems may also be critical to meeting a party’s obligation to preserve evidence.
There are, however, some common problems that must be solved before electronic navigation data can be reliably presented in the court room.  The most fundamental problem is data preservation.  Some systems automatically preserve all data; others retain data only until it is overwritten by new data.  Prompt action is always desirable, and counsel and the vessel owner must often work cooperatively at the earliest point in the investigation to preserve critical evidence.  Another problem is preserving the data’s chain of custody.  It may often be necessary to hire electronic technicians to retrieve data who may not be familiar with the legal requirements for preserving evidence.  Thus, the electronics technician, computer forensics expert, and lawyer may need to work together to avoid later questions about the data’s authenticity, reliability, and accuracy.  If the VDR data (or any data from the memory of an electronic navigational device) has been transferred to the vessel’s computer, it probably would be advisable to image or otherwise preserve that computer hard drive.  Finally, it may be necessary to correlate data sources and find an adequate explanation for anomalies.  Different sensors may record the same data with differing accuracy and often will be running on different time standards.  Reconciling these differences is necessary to satisfy the court that the data is reliable.

The Influence of E-navigation Evidence
Many commentators have observed that jurors and other fact-finders, especially those from the so called “MTV-generation,” have come to expect to be entertained with computer-generated simulations and the use of technology during trial, just as it is used in their daily lives.  As observed by Fred Galves in an article published in the Harvard Journal of Law and Technology, “if a ‘picture is worth a thousand words,’ then a computer-generated animation says a thousand words, sings a thousand songs, and paints with a thousand colors all at once.”
Nevertheless, the use of computer animations in the courtroom remains one of the most controversial issues in the law of evidence.  While some courts accept computer animations without question, particularly trials to the judge with no jury, others are wary that computer animations are more likely to pervert the fact-finding process than they are to enhance it.  Many critics are skeptical that the purported desire to help fact-finders understand evidence is nothing more than an excuse to dazzle them with technological “whiz-bang” and paraphernalia used to “Disney-up” the evidence.
Electronic navigation evidence, however, is mostly immune from these criticisms.  If properly preserved and authenticated, it is generally not simply a computer “animation” in the sense that it attempts to recreate what a witness thinks he remembers seeing or what an expert believes has occurred, but rather the actual data recorded on board the vessel at the time of the accident and, thus, a true visual representation of what the witness experienced.  Properly presented, electronic navigation evidence can be an extremely powerful persuasive tool that can make the difference between winning and losing a case.
Two cases in which the authors represented the ship owners illustrate the effectiveness of electronic navigation evidence.  In one case the crew of a commercial fishing vessel alleged that a ship inbound to New York in dense fog collided with and sunk the fishing vessel.  The fishing vessel crew subsequently identified the ship from photographs.  The ship’s crew denied that their ship was in collision and testified that at or before the time of alleged collision no targets appeared on the ship’s ARPA radar.  The ship’s ECDIS was interfaced with the ARPA and was equipped with a memory.  Fortunately the ECDIS memory was preserved.  This evidence established two crucial facts.  The first was to confirm that no radar targets that could have been the fishing vessel appeared anywhere near the ship’s track.  The second was that the ship’s track at all times was two miles or more away from any of the several reported positions of the fishing vessel.  Still shots of the ECDIS and a playback of the ECDIS display in accelerated time (real time would have been too time-consuming) were presented to the jury.  This evidence was instrumental in convincing the jury that the ship could not have been responsible for sinking the fishing vessel, resulting in a jury verdict in the ship owner’s favor.
In the second case, while proceeding outbound from New York harbor intending to anchor in Gravesend, the port anchor of a bulk carrier prematurely deployed.  When the anchor was winched up a cable was caught on one of the anchor’s flukes.  That cable was later alleged to be a fiber optics cable that ran from Staten Island to Brooklyn.  The cable owner claimed that it laid the cable pursuant to an Army Corps of Engineers permit within a charted cable area that crosses the Verrazano Narrows and that the ship had negligently dropped her anchor in that cable area.  However, the ship’s SVDR recording of the ECDIS and GPS data, and its recording of the sound of the anchor chain running out (marking the exact time of the anchor release), established that the anchor was released at a position some 70 yards outside of the charted cable area.  The judge relied on this data to dismiss the cable owner’s claim.  Significantly the court also denied the cable owner’s request for depositions of the master and crew, finding that the recorded electronic data would be more accurate than the crew’s observations.  This decision was affirmed on appeal.
The role of electronic data in the resolution of maritime cases is now firmly established.  It therefore is important for vessel operators and their crews to understand how to preserve this important evidence in a manner that ensures its admissibility in any subsequent legal proceedings.

Alan Weigel is an Of Counsel at Blank Rome Maritime and concentrates his practice in the area of commercial and insurance litigation and arbitration, with particular emphasis on the maritime industry.

Richard Singleton is a Partner at Blank Rome Maritime and concentrates his practices in the areas of commercial law, litigation, and arbitration with particular emphasis on the maritime industry.  He has over 20 years’ experience.


(As published in the July 2014 edition of Maritime Reporter & Engineering News - http://magazines.marinelink.com/Magazines/MaritimeReporter) 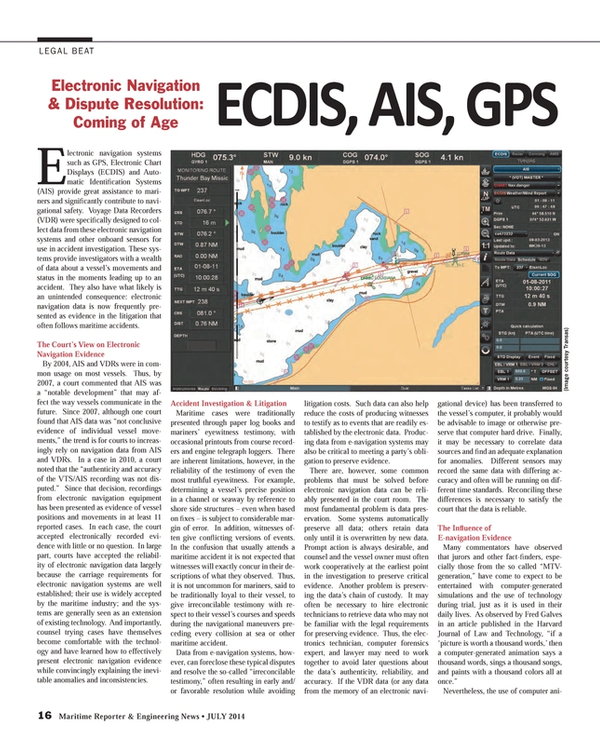