Prelude By the Numbers

Out at sea, look! It’s a ship! It’s a floating rig! It’s SuperFLNG!

While not “faster than a speeding bullet,” Shell’s shipzilla Prelude is certainly more powerful than a speeding locomotive, and will be able to leapfrog in size, many of the world’s tallest buildings. By any definition, the super-size Prelude floating liquid natural gas (FLNG) vessel is gargantuan. And yet it is designed to cram everything you’ll find in a full-size, shore-based processing plant into roughly a quarter of the space.
Longer than four soccer fields and displacing six times as much water as the largest aircraft carrier, the FLNG facility will be the biggest floating production facility in the world when it debuts at some point in 2017 at an estimated cost of nearly $11 to $13 billion.
Investors in the Prelude Project include operator Royal Dutch Shell (67.5%), Inpex 17.5%, Korea Gas Corp. (Kogas) 10%, and Taiwan’s CPC 5%.
It can be hard to grasp the breadth and depth of a project of this scope but a picture is still worth a thousand words, so here are a few to help put things into perspective:

•    Contents of 175 Olympic Swimming Pools – Amount of liquefied gas that can be stored in the facility’s storage tanks below deck.

•    Four soccer fields Plus – Equivalent length of the vessel, which will measure nearly half a kilometer in length (488 meters/1600 ft.), making it a few meters longer than the biggest oil tankers and almost as long as the fourth largest building in the world – the Shanghai World Financial Center, which stands at 492 m. The facility is also 74m wide.

•    Arc de Triomphe - A structure that size could fit inside Prelude’s 93-meter (305-foot) high mooring turret, which will run through the facility.

•    $30 billion  The amount Shell is willing to spend up to in development, in the Australian region over the next five years.

•    50 million liters The amount of cold water that will be drawn from the ocean every hour, to help cool the natural gas.

•    117% The amount of Hong Kong’s annual natural gas demand that Shell estimates could be met by the facility’s annual LNG production.

•    1.6 million  the number of engineering man hours invested into the front end engineering and design (FEED) phase of the development.

•    About 3,000 The number of engineering drawings done for the project.

•    3,000 km  Total length of electrical and other cabling installed on the facility, the distance from Barcelona to Moscow.

•    600  The number of engineers worldwide that have worked on the development phase of the Prelude FLNG project to define, design and evaluate plans.

•    6,700 hp The power of each of three thrusters located in the rear of the Prelude FLNG; only two will operate at any one time.

•    7  The number of Prelude development wells.

•    4  The number of competitors particularly hot on Prelude’s heels with their own FLNG plans, including Petronas, ConocoPhillips, GDF Suez and Exxon- BHP.

•    20-25 years – The length of time Prelude is expected to stay moored over the gas fields before heading to dry dock for updates and repairs.

•    July 2009 - Shell awards the contract for the design, construction and installation of multiple FLNG facilities over a period of up to 15 years to a consortium of Technip and Samsung Heavy Industries, based upon Shell’s proprietary design.

•    September 9, 2011 - Fabrication of Prelude well heads, marking the first ever steel cut for the Prelude Project. 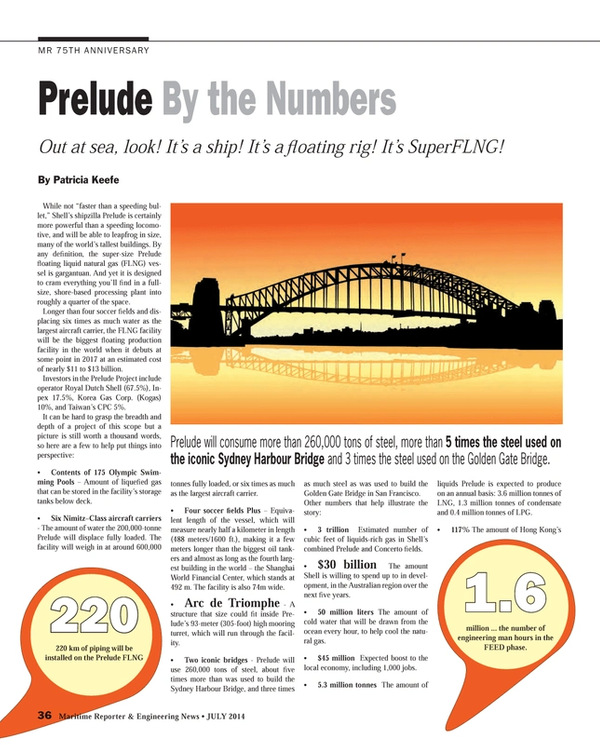 Read Prelude By the Numbers in Pdf, Flash or Html5 edition of July 2014 Maritime Reporter