Cygnus was founded by a marine surveyor who specialized in the inspection of large oil carriers, when it was felt that there was a need for an accurate digital ultrasonic thickness gauge where coating did not have to be removed and accurate, verified measurements were obtained.  The multiple echo technique, used with oscilloscopes (flaw detectors), was first digitized by Cygnus and introduced in 1983.  In 1985 an underwater version was introduced worldwide.  In 2012 a new diver hand held version was introduced called the DIVE.  This gauge is worn on the diver’s wrist/forearm and features a large LED display, data logging, waveform presentation, helmet mounted display and topside data logging or topside display with video overlay option.
In mid-1990’s Cygnus offered circuitry to be mounted on large work class ROV’s to perform thickness testing.  By 2000 Deepwater and Shallow Water units tested to 1,000 and 3,000 meters were introduced for workclass ROV’s.  In 2005 the Mini ROV system was introduced for the smaller observation ROV’s.  In 2009 the Deepwater and Shallow Water units were increased to 2,000/4,000 meter depth ratings.  Cygnus has been in the forefront of design and technology to serve the need for subsea inspection by ROV’s on offshore platforms and subsea piping.

The Tech
All Cygnus gauges employ the Multiple Echo Technique.  This technique first developed in the 1950’s for use with the oscilloscope type gauges called flaw detectors.  In 1983 Cygnus introduced the first digital multiple echo thickness gauges.  The gauge operates by matching the timing of two consecutive backwall echoes to verify that the sound has in fact come from the same backwall.  When the timings match exactly, the gauge displays a measurement. 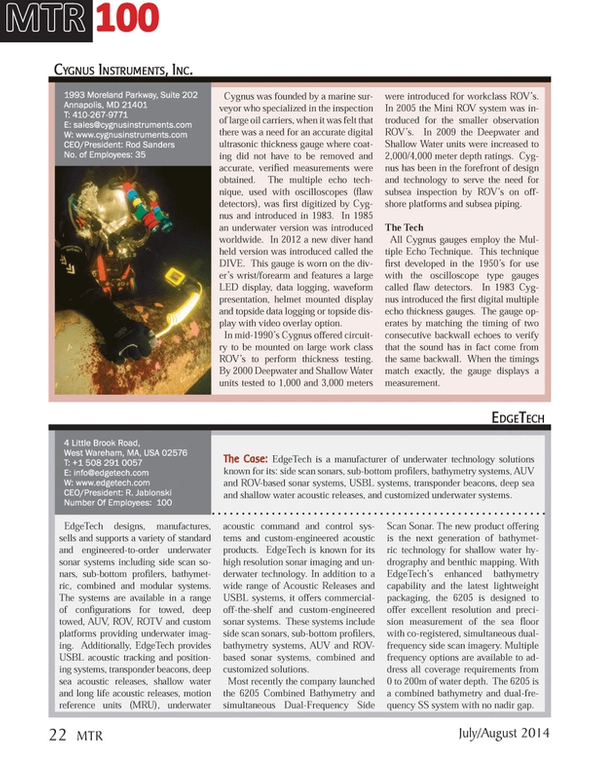