RDSEA International, Inc., St Pete Beach, Florida, founded in 2002 by Rick Cole while a Research Associate at the University of South Florida’s College of Marine Science, around the increased need for experience and expertise in “ocean technologies” in the blue-water and coastal regions of our oceans, bays and estuaries (fresh water not to be excluded). RDSEA’s foundation began on federal, state and local oceanographic programs and observing systems focusing on “air-sea interaction” and “ocean circulation”.  Its experience spans over three decades of ocean measurements and technology evolution.  Knowledge of our ocean environment is no longer limited to science and scientists. The growing list now consists of: coastline emergency management, U.S. Coast Guard search and rescue operations, the U.S. IOOS, public health, recreational and commercial fishing, diving, alternative energy solutions, the public’s need and want to know more about what is taking place offshore of their beaches and, of more recent concerns, oil spill response management and mitigation. All now front and center for those of us that provide the technology, methodology and services of collecting critical data on observation platforms, systems and programs, especially in today’s era of increased natural phenomenon such as hurricanes, earthquakes and tsunamis.
RDSEA measures large or small-scale-ocean atmosphere interactions, mixed layer dynamics and ocean circulation. With a variety of data loggers and transmitters to choose from within our quiver of components, based on project specifics, we can record internally and transmit externally environmental parameters directly to your facility server for further post processing. Ocean measurements have come a long way since first recording the basic physics of water column density and currents only. Technology has altered and advanced the manner in which we measure, record and transmit the above mentioned parameters. Eliminating “cables” and “moving parts” is a goal of many groups in today’s era of offshore sampling, both top-side and subsurface. 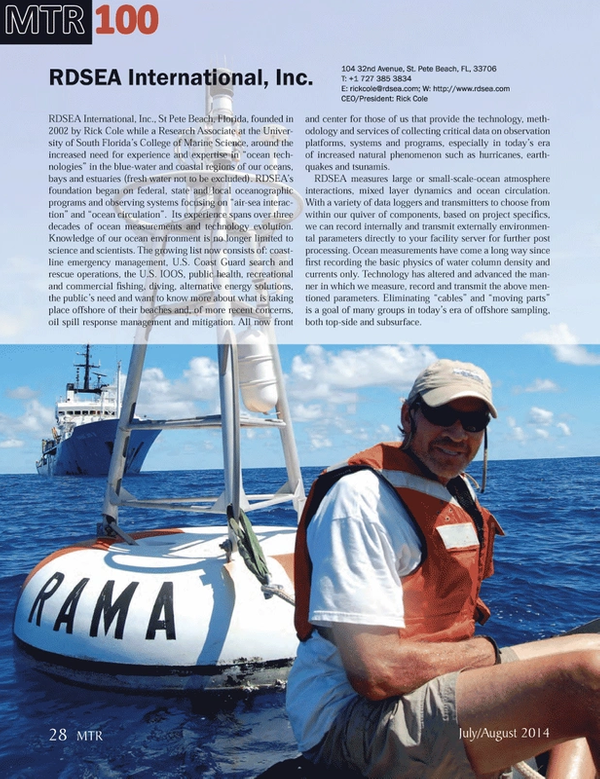