Going back to 1807, Bibby Offshore has kept up its tradition of top-class ship ownership for more than two centuries. It has since expanded its services to the offshore oil and gas industries, starting in the 1980s. Sixth generation Sir Michael Bibby has been able to uphold the values that his ancestors created the company upon. Over the past 10 years, Bibby and its sister companies have skyrocketed in size, going from having just 10 employees, to having 1300 employees today.
Bibby Remote Intervention Limited (BRIL), a branch of Bibby Offshore, has added to its fleet by signing a charter for an IRM (Inspection Repair and Maintenance) light construction vessel and two ROVs.
These charter agreements have been reached in preparation for the construction of an MT6021 vessel. The vessel serves the purpose of providing IRM services, pipeline & structural inspection, and light construction support. The ROVs, SMD Quasar 150hp vehicles, will aid with survey, construction, and drill support operations in Bibby Offshore’s newer markets, Southeast Asia and North America. Additionally, Bibbly Offshore has invested nearly $51.4 million in an effort to expand its fleet. This investment has gone towards such vehicles as the EDT Jane, an ROV support vessel.
Bibby Offshore has had booming success in its newly developed North American division, Bibby Subsea. Located in Houston, the branch has tripled since its inception. Market demand has been great, projected to grow 43% over the next five years. 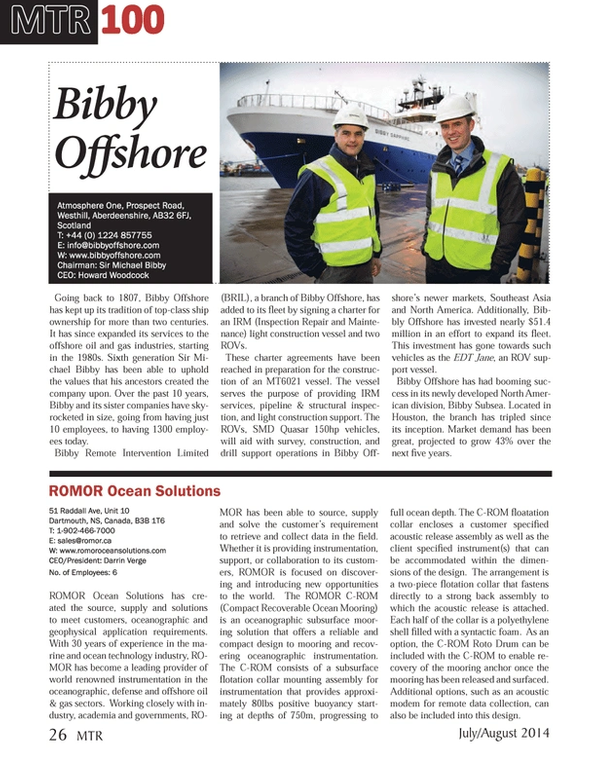