Please provide an overview of the companies in your group, citing examples of group collaboration.
The Teledyne Marine Systems Group consists of Teledyne Benthos, Teledyne Gavia, and Teledyne Webb Research. The group focuses on the development, production, and support of underwater vehicles and tow-bodies, acoustic communication and positioning, and sound sources and infrastructure to support subsea data collection.
The three companies that make up the Marine Systems Group work in concert to provide integrated systems. We work closely with our sister Teledyne Marine companies to make available to the market unique system solutions. Recent collaborations include the integration of both Teledyne RDI Acoustic Doppler Current Profilers (ADCPs) and Teledyne Benthos acoustic modems onto the Teledyne Webb Research Slocum Glider and the development and production of a deep-towed sonar platform that includes both Teledyne RESON multibeam echosounders and Teledyne RDI Doppler Velocity Logs (DVLs).
What is your group’s most exciting technology advancement since MTR 100 2013?
Over the last year, the Teledyne Marine Systems Group has continued to invest heavily on new technology and product development. We have released the first member our newest generation of acoustic releases, the R12K, that provides enhanced information about release status and increases overall ease of use. We have developed our Slocum Oil & Gas Glider that has sensor suites available specifically targeting the needs of the Oil and Gas community. After successful field testing, we have introduced our deepest profiling float, the 6000 meter APEX Deep that is able to provide conductivity, temperature and depth data for more than 150 profiles at an average cost of about $500 per profile.

What market trends are fueling your group?
Over the last 12 months, we have seen a continued acceleration of the uses of underwater gliders in defense, oceanographic, and the Oil & Gas markets. This growth is fueled by the continued improvements of the vehicles and the integration of new sensor technology. We have also seen a strong growth in the use of AUVs in the Oil & Gas survey market and a drive for deeper operations.

Teledyne Gavia
Located in Kopavogur, Iceland, Teledyne Gavia provides turnkey survey solutions to customers undertaking a variety of tasks for defense, commercial and scientific applications. The Gavia Autonomous Underwater Vehicle (AUV) can carry an array of sensors and custom payload modules that make it suited for any research, monitoring or surveillance task where autonomy, cost and ease of deployment matters. Its modular design allows for rapid sensor reconfiguration and battery replacement. While compact and “low logistics” the Gavia is also extremely capable, rated to 1000m and proven with a variety of sensor systems. As an Icelandic technology and compatible with sensors from other international sources the Gavia AUV is widely exportable and the chosen low logistics AUV of commercial survey firms.
www.teledynegavia.com 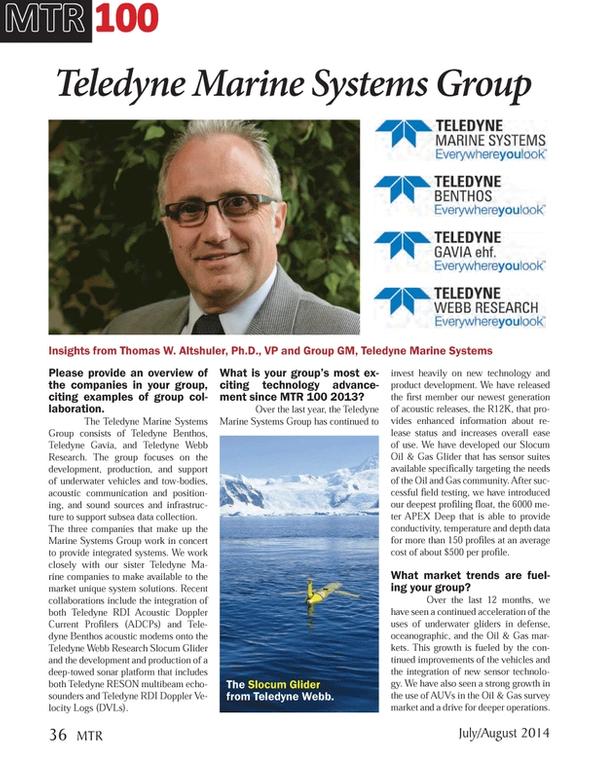