The Company
McMillan Design, Inc. is a small, privately owned, multi-disciplinary design company located in Gig Harbor, Washington. It concentrates its current efforts in manufacturing, improving, and marketing the Sea Catch Toggle Release and other innovative related related products. The Sea Catch is now available in over 68 different models.
The Sea Catch Toggle Release hook, designed exclusively for safe release of lines or objects under load, and is designed to be the simplest and most innovative in-line, quick release hook design on the market. Since 1994, Sea Catches have gained praise from engineers and users in 14 major industries around the world.

The Tech
Using computer-generated parts precision-cut from aerospace-grade stainless steel plate, Sea Catch is a revolutionary, tough, multpurpose quick release that combines unique features such as no springs, common shackle connection, multi-directional, low friction releasing and a hitch-pin safety lock. The key is the combination of a proven toggle linkage principle, low friction, computer-generated parts and a lot of thinking about its jobs.
Every day, all over the globe, engineers, technicians and crew members find themselves faced with the daunting and often unpredictable task of releasing a heavy object while under load. Releasing an object under load need not be a daunting task any longer. 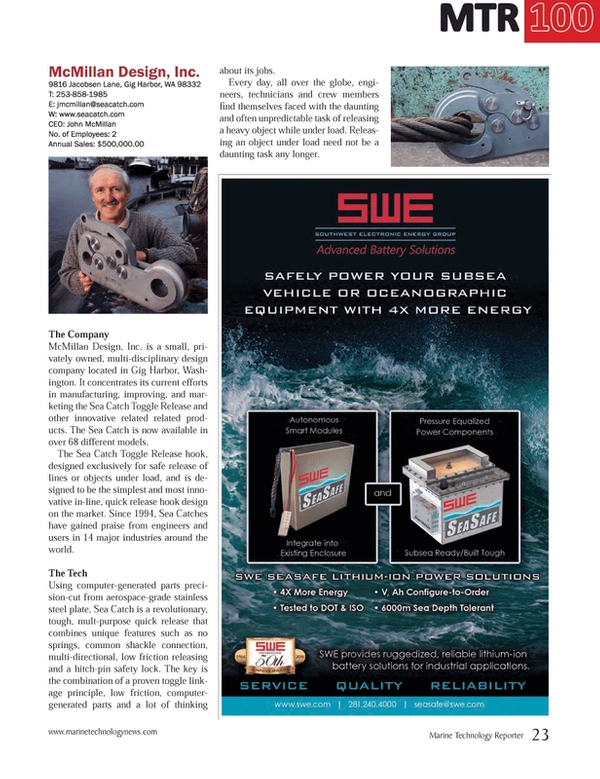