The Company
Imagenex was founded in 1988 by pioneers in the development of high-resolution imaging and profiling sonar. Within two years, the company had produced its first sonar – an imaging head for the commercial underwater industry that was the unheard-of size of a coffee mug and rated for 300 m depth.
Company milestones include introducing the industry’s first digital color imaging sonar that could be operated from a computer without a dedicated processor in 1995; introducing a sidescan sonar in 2000 with a revolutionary price/performance ratio; and developing a high quality, compact and cost-effective multibeam sonar with obstacle avoidance or profiling configurations and optional depth ratings to 6,000 m.
It is the company’s development of the lightweight, cost-effective Delta T multibeam sonar that is successfully bringing the benefits of real-time, high-resolution, 3D visualization within reach of operators that previously had to use mechanical scanning single-beam devices.
The combination of reduced cost, high quality imaging and functionality of the Delta T and other Imagenex products has been increasing its popularity in the scientific market, and for commercial, recreational and search and rescue (SAR) applications around the globe.

The Tech
Imagenex has developed a reputation for products that break new ground for depth capability, size, cost, imaging quality and functionality. Innovation is both a goal and methodology for the company, which closely manages its product development, in order to control quality.  As Imagenex continues to bring new products to market, it adds variations and improvements to existing equipment.
The DT100 Multibeam Echo Sounder reaches a new performance level in the new DT101 – a single instrument integrating the sonar, motion reference unit (MRU), and sound velocity sensor into one sleek and compact unit.  The DT101 requires only one cable for operating all three sensors.
Gyro-stabilization of the Imagenex Model 881A-GS & 881L-GS make these high resolution sonars into systems capable of crystal clear visualization of the ocean environment from moving platforms, no longer compromised by the blurring effects of host vehicle rotation. An advanced, low drift gyro is integrated directly into the sonar head, so the sonar can now compensate for vehicle motion in real-time with unprecedented accuracy, stability, and robustness. 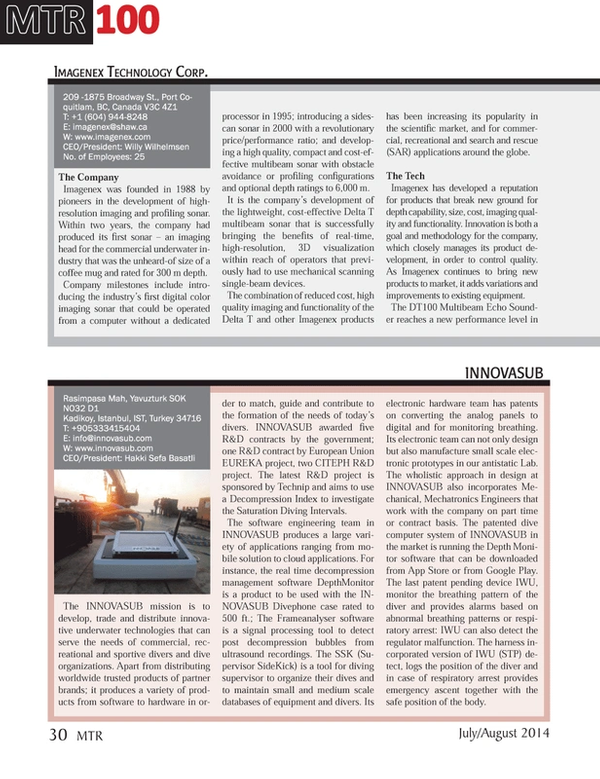