The Long Beach-Greater Los Angeles Section of The American Society of Naval Engineers held its first meeting of the 1980-81 year at the Officers Club of the Los Alamitos Armed Forces Reserve Center.

Chairman J.R. (Bob) Malone announced the program for the year, pointing out the excellent job that Carl E. Erickson, program chairman, has done in getting an outstanding group of presenters with timely and interesting topics. He encouraged all present to invite friends and business associates to become members, stressing the attendance at the monthly meetings with a slogan "Bring a Friend." The chairman next introduced the Section officers and then asked program chairman Erickson to take over with the evening's activity. The announced topic for the meeting was "Update on Diego Garcia Facilities," by Lt. Michael F. Casey, CEC, USN, Assistant Officer in Charge of Construction for the Long Beach area. Lieutenant Casey has had two tours of duty on Diego Garcia, the last of which was as Officer in Charge of the 30th Naval Construction Regiment Detachment.

Lieutenant Casey opened by saying that his remarks would be accompanied by a number of slide pictures of the island and its facilities and that it would be rather informal, consequently he would welcome questions from the audience on the subject of the pictures as they were presented instead of having a formal question-and-answer pe- riod at the end of his presentation. This "audience participation" type of presentation made for a most interesting meeting that was extremely informative about a Naval base on an atoll in the Indian Ocean located about 1,000 miles south and slightly west of the tip of India. We occupy the western half of the island by virtue of a 50-year lease from Great Britain, negotiated in 1966, and share it with two British officers and 24 men who are totally integrated into our organization.

Work goes on 24 hours a day, thus the cooks are busy serving 10,000 meals a day on a around-the-clock basis. The Seabees have done all of the construction work on Diego Garcia right down to the Olympic size swimming pool, gymnasium, bowling alley, tennis courts, offices, warehouses, barracks, shops, piers, houses and even the streets, sewers, electrical generation and distribution facilities, as well as the 12,000-foot-long air strip.

To the complete entertainment as well as the enlightenment of all, Lieutenant Casey presented a lucid description in pictures and words of our most important military base to support our Naval operations in the Indian Ocean. He was given a resounding round of applause for his excellent program, and was presented with a framed Certificate of Appreciation by chairman Malone as an expression of gratitude on behalf of the Section. 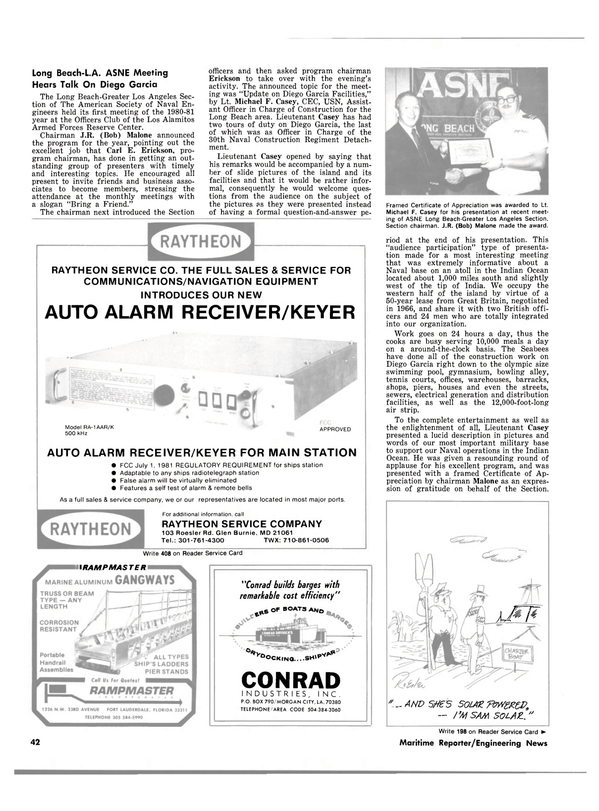