Newport News Shipbuilding has delivered the nuclear-powered, guided-missile cruiser Arkansas to the United States Navy. The Arkansas is the fourth Virginia Class cruiser built by the Virginia yard. Her keel was laid on January 17, 1977 and she was launched on October 21, 1978. The vessel was commissioned recently at the Norfolk Naval Base.

This is the fourth U.S. Navy ship to be named in honor of the State of Arkansas. The first Arkansas, a screw steamer, was built in 1863 for service in the Civil War. The second, a battle monitor built in 1902, was used for instruction at the U.S. Naval Academy and later for patrolling the East and Gulf Coasts before being renamed Ozark in 1909 to make the name available for the third Arkansas. That vessel, the battleship Arkansas (BB-33), served during World Wars I and II, winning four battle stars for duty escorting convoys across the Atlantic and for participating in the invasions of Normandy and Iwo Jima.

The new Arkansas will have a crew of 497 and the most advanced weapons and equipment necessary to perform her mission of anti-surface, anti-air, and antisubmarine warfare. Powered by two nuclear reactors, Arkansas will be able to operate at least 10 years before refueling is required.

Newport News Shipbuilding, the only shipyard capable of building and servicing the full range of nuclear-powered surface ships and attack submarines, has produced 14 of the 23 nuclear ships that have joined the U.S. 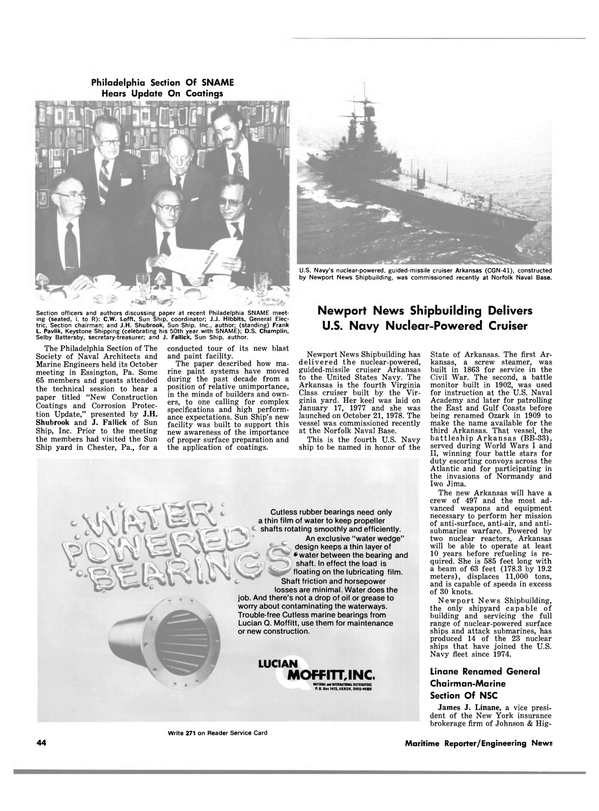