As the first step in a fleet modernization program, an order has been placed for construction of the world's newest luxury cruise ship, it was announced recently by Holland America Cruises.

Nazaire in France, and is expected to be commissioned March 31, 1983. The new luxury vessel will cost approximately $135 million.

To be registered in the Netherlands Antilles, she will have a cruise capacity of approximately 1,200 lower berths and a crew of 536. The cruising speed will be about 21 knots. A firm option for a second identical vessel has also been signed by Holland America.

The new 11-deck luxury vessel will have all modern comforts, technological innovations, and the latest satellite navigation and communication equipment, but the prevailing atmosphere onboard will be one of grace and warmth—the rich Dutch heritage so valued in the 134 Holland America ships that have sailed during the past 108 years.

Dutch architect F. de Vlaming has been retained to design and guide the construction of the public areas and cabins. Passengers will find spacious lounges, cozy intimate bars, two swimming pools and a wading pool, a formal dining room and picture windows overlooking the ocean, a Lido area for informal breakfast and lunch, a disco, nightclub, casino, large gymnasium and sauna, and an observatory on the top deck of the ship with a panoramic view of the sea.

The new luxury liner will be built to Lloyd's Register of Shipping Rules and Regulations and complies with the latest Safety of Life at Sea, United States Coast Guard, Netherlands Shipping Inspectorate, the United States Public Health Service, and other United States and international rules, regulations, and requirements. 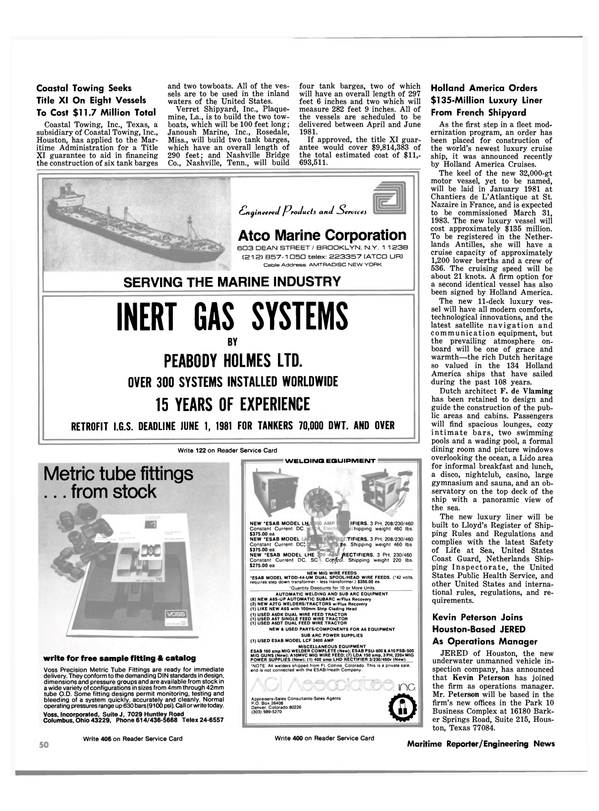