In a dramatic exercise, a simulated oil spill was staged in the Cypress Gardens Aquarama Pool.

For the first time, participants viewed a spill and cleanup from under water, through the pool's famous picture windows. "Our oil spill exercise demonstrated government and industry cooperation during pollution catastrophies that affect everyone," said conference director Roger Pynn of Belcher Oil. "The exercise posed the realities of a spill, giving participants a heightened awareness of their responsibilities in prevention and cleanup." The conference was completely underwritten as a public service by Belcher Oil, a unit of The Coastal Corporation, Houston. Cosponsors were the U.S. Environmental Protection Agency, the U.S. Coast Guard, the Florida Department of Natural Resources, and the Florida Spillage Control Association.

Among leading authorities who addressed the conference were DeVan L. Shumway, editor and publisher of The Oil Daily, and a recognized energy authority; Rear Adm. Wayne E. Caldwell, Chief of the Coast Guard's Office of Marine Environment and Systems; and Alice B. Berkner, executive director of the International Bird Rescue Research Center, Berkeley, Calif., and one of the world's foremost authorities on saving oiled wildlife.

Mr. Shumway predicted that oil prices will rise moderately next year because OPEC is likely to index the price of crude oil to inflation. He went on to say that nobody really knows what the Iran-Iraq war will do to world oil supplies, as the extent of the damage has not yet been determined, but it is known that Western nations have stockpiled millions of barrels of oil. The Energy Department has stated that worldwide production is 2 to 2.5 million barrels a day above demand, and the glut, according to Mr.

Admiral Caldwell discussed the state of the art in handling oil spills, and referred to prototype vessels that have shown a potential for recovering oil in currents up to eight knots. He said that the Coast Guard "would like to extend this concept to open-water situations if it proves successful in river and harbor conditions." According to Admiral Caldwell, open water situations are an area where commercial cleanup contractors have not really ventured.

In closing, he said: "Coast Guard pollution response policy is not to interfere with private enterprise, but is a concerted effort to encourage private development and involvement." Alice B. Berkner, author of Saving Oiled Seabirds, a publication endorsed by the U.S. Fish & Wildlife Service and the most definitive book in this field, conducted a special workshop on bird rescue techniques, in cooperation with attending representatives of the Florida Audubon Society and the U.S. Fish & Wildlife Service. 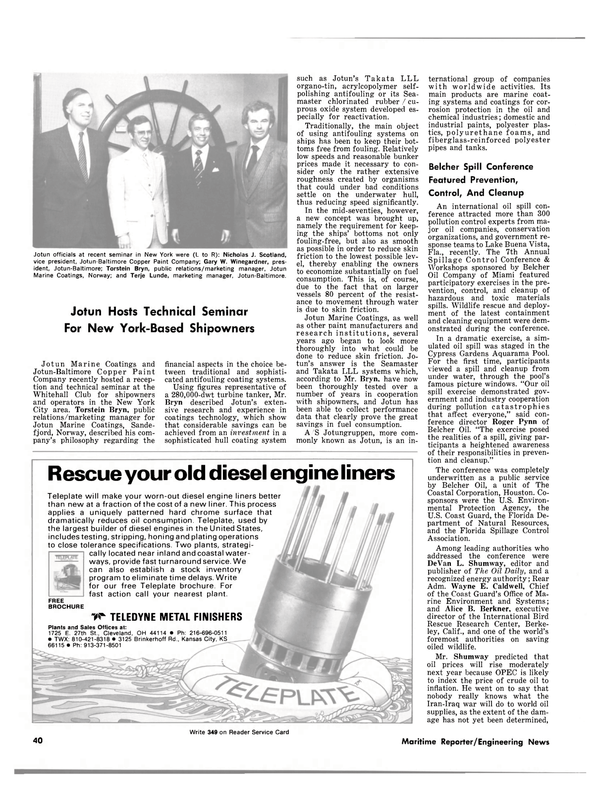