The latest delivery made by Delaware Marine & Manufacturing Company is the stern trawler American Eagle, built for Jack and Adele Daab of Howard Beach, N.Y. The new vessel is 78 feet overall, with a 23-foot beam and 9-foot 5-inch draft fully loaded.

The hull is plated with A-36 grade steel 5/16-inch thick, while the main deck is ^-inch steel. The entire vessel is transversely framed with 3-inch by 2-inch by 14-inch angles on 21-inch centers. In addition to the vessel's four main transverse watertight bulkheads, web frames were placed at intervals for additional strength.

"The hull lines of the vessel were developed carefully to produce a form that would be both easily driven and highly seaworthy," according to the American Eagle's designer Richard Taubler, who is president of Delaware Marine. The resulting vessel proved to be just that — seaworthy, stable, and economical to operate. Her top speed, fully loaded, is 13 knots.

The vessel is powered by a pair of Cummins KT-1150-M marine diesel engines, which also drive three hydraulic pumps by means of power take-offs. Each main engine develops 365 bhp at 1,800 rpm, and drives a 60-inch by 52- inch, three-blade bronze propeller on a 4-inch-diameter stainlesssteel shaft through a 6:1 Twin Disc MG-514 reverse / reduction gear. Two John Deere/Lima generator sets developing 30 kw each were installed for auxiliary power.

100,000 pounds of fish can be carried in the vessel's 3,500-cubicfoot fish hold which is polyurethane insulated and cement lined.

Pen boards divide the hold into 30 compartments, and 10 flush Baier hatches installed in the main deck over the hold assure easy filling. 6,000 gallons of diesel oil is carried in four tanks, while the fresh water tank carries 2,500 gallons.

The boat, which will be used for bottom trawling for squid, flounder, scup (porgies), and butterfish, and midwater trawling for mackerel and herring, is outfitted with the latest electronic equipment including a Chromascope depth sounder, recording depth sounder, C-Nav-XL Loran C receiver and C-Plot two track plotter all by Epsco; a Seatrek autopilot, a Furuno radar, and Modar VHF radio.

The comfort of the American Eagle's crew of seven is assured by Carrier air-conditioning in the wood-paneled staterooms, galley, and mess rooms. 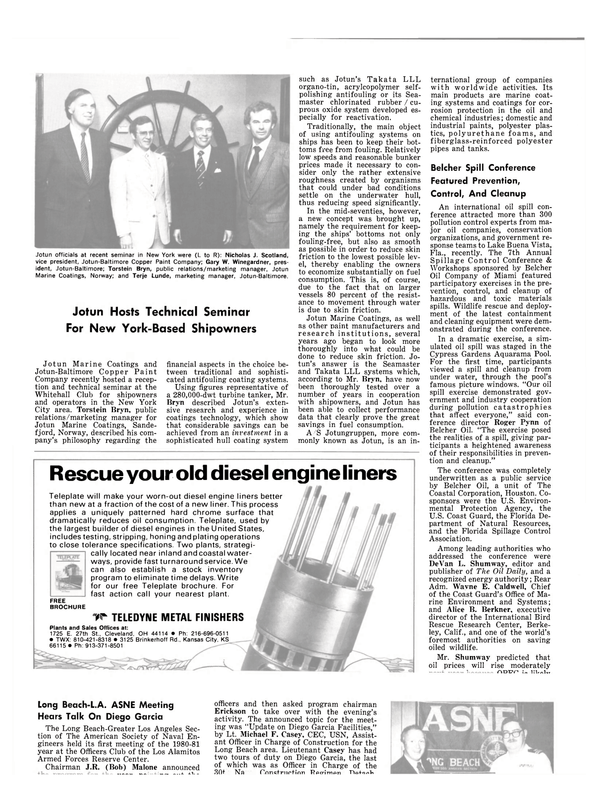