First Of A New Hybrid Line From Halter

new breed of tough, versatile offshore tugs has been introduced to the maritime industry by Halter Marine, Inc. and Otto Candies, Inc. The first of the new line, and the first of six to be built by Halter for Candies, the Brett Candies (shown above) is a 105- foot, raised forecastle tug that is a hybrid combining the best features of a tug and tug/supply vessel.

"She is now at work in the Gulf of Mexico running anchors and towing barges with ease," said Paul Candies, operations vice president of the Candies company.

"We think she's the most capable boat in the Gulf because of her size and engineering," he added.

Of unique design, the Brett Candies's large aft deck can accommodate cargo as well as buoys and anchors hauled up on the oversized stern roller. Stern gates facilitate the tug's anchor handling.

"Candies wanted a stout, husky tug that could handle the jobs of much larger tugs, but more efficiently," explained Harold P.

Halter, president of New Orleansbased Halter Marine. "We gave her the lines of a big tug scaled to 105 feet; that's why she looks larger than she really is," he continued.

Mr. Halter added, "The Brett Candies is a good example of how Halter Marine's in-house staff of naval architects and marine engineers can react quickly and accurately to the industry's changing requirements while meeting Coast Guard tow line and stability criteria." The Brett Candies has a beam of 34 feet and a depth of 17 feet, and is certified under 100 gross tons. Some of her capacities are: 99,000 gallons of fuel oil; 1,600 gallons of lube oil; and 9,700 gallons of potable water. The unusual aft deck has 1,054 square feet of clear cargo space.

She is powered by two GM Electro-Motive Division 12-645E6 diesel engines developing a total of 3,000 bhp at 900 rpm, which were rebuilt at Otto Candies's Des Allemands, La., facility. Bollard pull through her Markey towing winch is approximately 35 tons.

Spacious accommodations have been provided for up to nine crewmen for extra comfort on extended voyages or jobs.

The vessel was built by Halter's Lockport, La., division, one of a group of shipyards owned and operated by Halter Marine in the Southeastern United States. 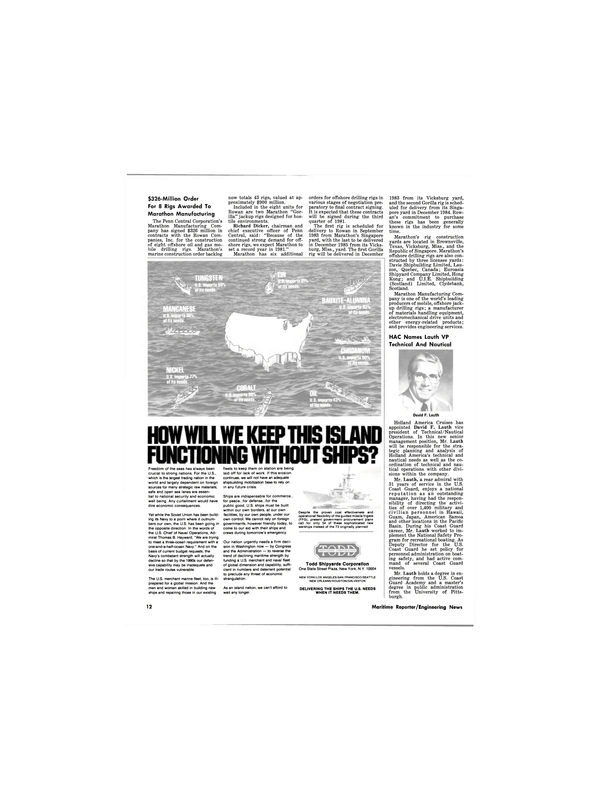 Read First Of A New Hybrid Line From Halter in Pdf, Flash or Html5 edition of August 1981 Maritime Reporter