Throngs of spectators came to the Jeffboat, Incorporated, Jeffersonville, Ind., shipyard recently to witness the dual christening and launching ceremonies of the motor vessel Jeffboat, a 6,000- horsepower vessel named to honor the company's accomplishment as an industry leader over the past several years.

The honor was given to Jeffboaters in recognition of the shipyard's recent spectacular production records. Beginning in 1979 and continuing today, the shipyard has enjoyed an unprecedented demand for marine equipment.

The new towboat will join the fleet of American Commercial Barge Line Company (ACBL), a sister company of Jeffboat, Incorporated, when she is completed.

Receiving special honors on that day were J. Kirk Rowell and Frances Brendle, the most senior male and female employees of Jeffboat. They were chosen as cosponsors of the new vessel for their many years of dedicated service to the company. In that capacity, Mr. Rowell stood by Frances Brendle takes a sure aim at hull of the M/V Jeffboat. Looking on are Robert W. Greene III, president, Jeffboat, Inc.; J. Kirk Rowell, cosponsor; H.J.

while Mrs. Brendle spoke the words, "I christen thee the motor vessel Jeffboat," and cracked a bottle of champagne soundly against the hull of the towboat.

Orders were then given to cut the ropes holding the boat to the launchways, and the towboat slid down the ways.

When she is completed and outfitted later this summer, the Jeffboat will go into service as a line boat for ACBL, moving tows of up to 30 barges on all sections of the country's inland rivers.

Both ACBL and Jeffboat are part of the Inland Waterways Division of Texas Gas Transmission Corporation. 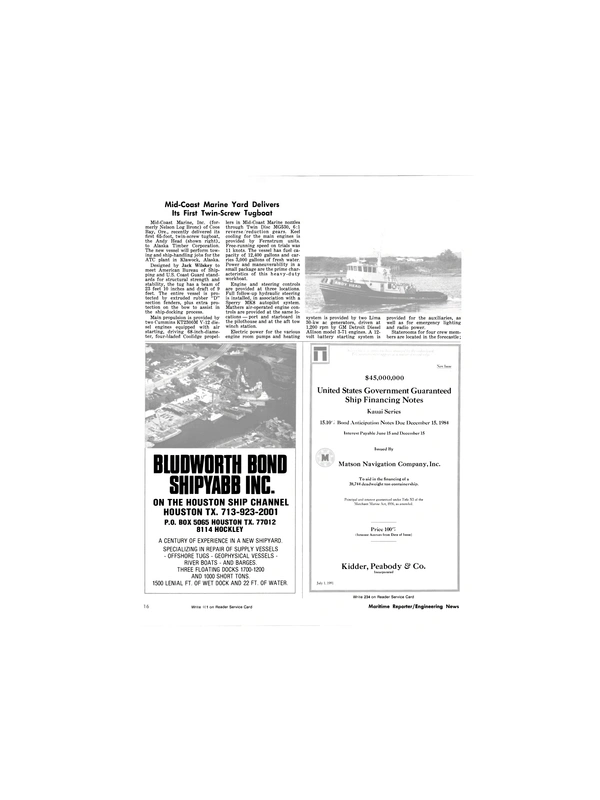