Vancouver Shipyards Launches Log Barge On A Film Of Water

The building capabilities of some shipyards are hampered by the problems involved in moving a launch-ready hull across dry land to the ways.

For Vancouver Shipyards Co., Ltd., North Vancouver, British Columbia, the solution has been to use "water bearings" to float the hull across land on a .005-inch film of water. In so doing, the yard has expanded its capability from a vessel size of 270 feet and 1,200 tons to a present maximum of 500 feet and 9,000 tons.

"With the water bearing system that we now use for this purpose, we can have several ships at various stages of construction," according to Ken Davies, naval architect for the firm.

The company's first major use of water bearings to position a large ship for launch took place in 1975, with the transfer of a 457-foot-long, 3,500-ton ferry for the provincial government. The most recent use of the system took place when the yard launched the first barge to be designed specifically to carry bundled logs. That barge, the Seaspan Rigger, will cost $11 million when completed. The barge has an overall length of 120 meters (about 394 feet), molded breadth of 27 meters (89 feet), and cargo deadweight of 12,700 tons. The barge is intended to serve major forest companies around the Queen Charlotte Islands, off the west coast of Canada, and Vancouver Island.

As with the ferry and other vessels similarly launched, the barge was moved from its building berth across to the launch sleds for side launching, using water bearings or "casters" supplied by Aero-Go, Inc., of Seattle, Wash. The launch weight of the Seaspan Rigger was 3,000 tons.

Water bearings are basically the same design as the air bearings developed over 15 years ago by Aero-Go. The major difference between the two systems is that the water bearings employ a thin (.005-inch) film of water instead of air on which the load moves, almost free of friction. In the launching of the Seaspan Rigger barge, the cradle of the barge moved on 96 Aero-Caster water bearings in carrying the ready-tolaunch vessel 150 feet to the launch sleds.

Each inflatable 48-inch by 48-inch caster has a circular element, or torus bag, permanently bonded to a rigid backing plate.

The bag is donut shaped, forming a central plenum chamber inside. There are also corner and center "landing pads" to support the load when the element is not inflated.

For lifting and moving, water is pumped into the bearing at a pressure of 50 psi. As soon as pressure within the caster exceeds the load's weight above it, the water escapes very gradually under the flexible bottom face, raising the load about .005 inch over the surface, which in this case is one of a number of concrete runways. The result is that the load floats above the surface so that approximately 1,000 pounds of load can be moved with only one pound of force.

Because the load can be moved with equal ease in any direction, work can be scheduled with great flexibility, Mr. Davies points out.

"We can build ship modules under cover, move them past one another on the building berth if required, and adjust to unforeseen schedule changes under circumstances such as delays caused by special supply problems." In the handling of the 3,000-ton log barge, the cradles on which the hull rested were sets of blocks, each 50-feet long. These in turn rested on wood spacers holding the blocks 2 inches above the concrete runways.

A crew inflated the water bearings, which lifted the blocks approximately 4 inches above the concrete runners. Motive power and guidance were provided by six crawler cats, two pushing and two braking, with one at each end to control movement fore and aft. "The vessel was also kept on line by a series of guide rollers attached to the launch cribs and acting on the sides of the concrete runways and launch sleds. We also had a 10-man crew on the ground including supervisors standing by." The excess water from the bearings was no problem, Mr.

Davies adds, since it also kept the runways clean and simply drained off into the ground. 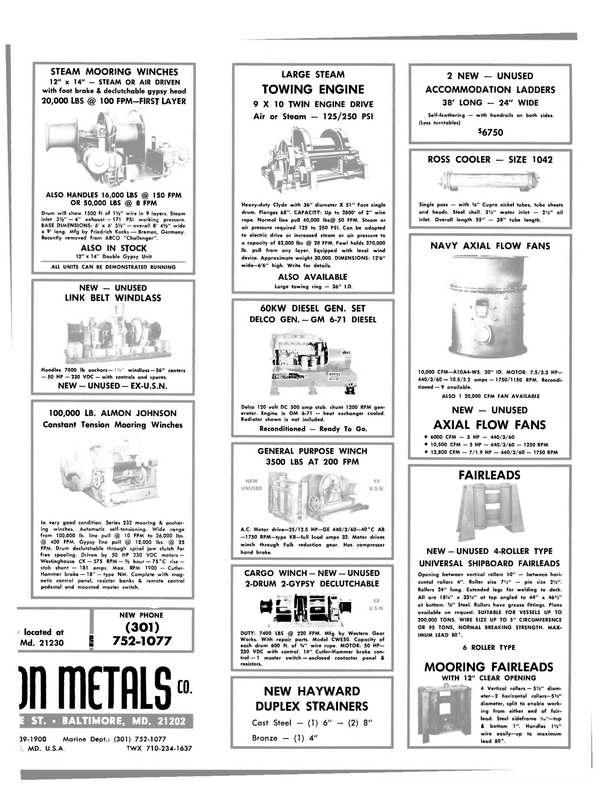