Japanese Yards May Build 250,000-GRT Liner The $800-million project to build the world's largest and most luxurious cruise liner, the Phoenix, appears to be nearing reality.

The project, which is being undertaken by the World City Corporation A/S, which was founded by Norwegian shipowner Knut Ulstein Kloster Sr. to build the Phoenix, involves the construction of a 250,000-grt, 5,200-passenger luxury cruise liner. The ship would be larger than the S.S. Norway, QE II and Sovereign of the Seas combined.

The Phoenix's passenger capacity would be twice that of the 2,600-passenger Sovereign of the Seas, which was just completed in December 1987.

According to recent reports, three Japanese shipyards—Ishikawajima- Harima, Mitsubishi Heavy Industries and Nippon Kokan K.K.— have the inside track on the contract.

Indications are that one Japanese yard would build the hull, a second its accommodation and superstructure and a third of its propulsion equipment.

As to whether the Phoenix would be built as a joint venture by three Japanese shipyards, Mr. Kloser replied, "By joining forces and forming the so-called 'World City Club of Japan,' these three yards have shown a positive interest. As a group, they are presently very strong candidates." The Phoenix will be 1,263 feet long, with a beam of 252 ¥2 feet, and will have three 8-story hotels on her deck, with palm trees, swimming pools and sandy beaches. Indoors, the ship will house a theater/concert hall, casino, shops, restaurants and cafes. The ship will also have a marina in her stern, where four 400- person cruisers will shuttle passengers to and from various ports of call and destinations within a 50-mile radius. The Phoenix will have a complement of 1,800.

The construction of the Phoenix is expected to take three to four years. 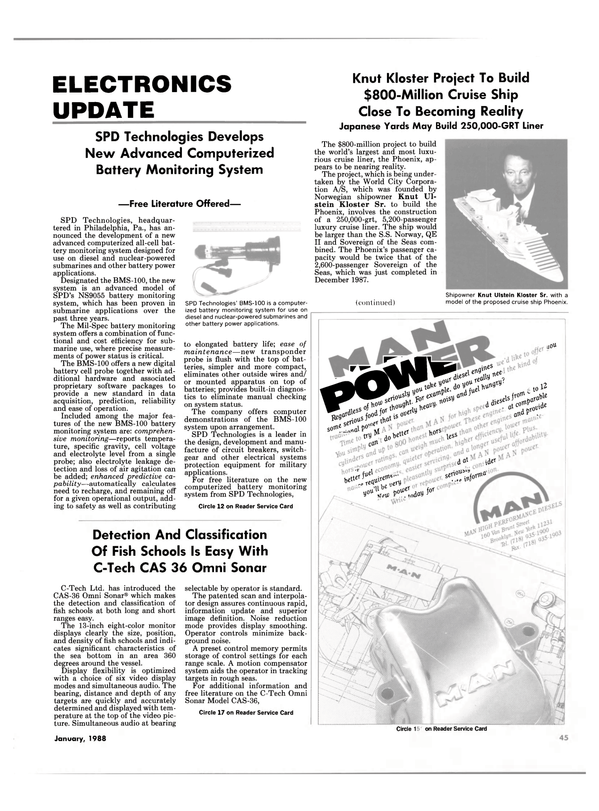