The Repowering Of QE2— The Largest Diesel Power Station Afloat

On April 25, 1987, the Queen Elizabeth 2 made history by becoming the biggest conversion job in merchant shipping annals. This historic date saw the completion of the conversion work at Lloyd Werft's Bremerhaven yard, the core of which constituted the replacement of the original steam turbine propulsion system by a state-of-the-art diesel-electric plant.

The aim of Cunard Line, the operator of the QE2, was to improve fuel economy, reduce maintenance and extend service lifetime.

The annual fuel consumption, resulting from a unique mix of short and around-the-world cruises and trans-Atlantic service, was the spur to a repowering assessment by Cunard.

The aim was to maintain her high-speed operating viability for another 20 years. Techno-economic feasibility studies in four major phases were carried out over two and a half years. Alternative scenarios ranged from keeping the existing plant to retrofitting various other propulsion installations.

Around 70 percent of the owner's investment was allocated for the removal of the original 110,000-shp plant and its replacement by a 130,000-bhp diesel-electric installation.

This diesel-electric installation was based on nine MAN B&W 9L58/64 medium-speed engines.

The final result was: the world's most powerful merchant marine propulsion plant; the most powerful electric propulsion plant (44 mw per shaft); a maximum speed of over 33 knots; a direct resilient seating of all nine MAN B&W engines (220 tons each); a freshwater generation of 1,000 tons per day; an extensive waste heat recovery system with a total efficiency of 74 percent; and the economical generation of power for hotel services.

Performance Specifications In July 1983 at Southampton, England, Cunard called a meeting and invited virtually all engine designers with models capable of meeting the horsepower requirements as well as a group of yards with proven experience in passenger ship conversions.

Cunard's performance specifications comprised four basic elements: (1) the proposed propulsion plant was capable of meeting the operating profile of the ship (including a 15 percent sea margin) using no more than 85 percent of the mcr of the installed plant. The speed of 32.2 knots had to be maintained; (2) noise and vibration levels were not to exceed those of the former plant; (3) a fully automated and unmanned engine room design was required to ensure maximum reliability and maintainability; and (4) the maximum out-of-service time for the conversion project was set at seven months.

How MAN B&W Met The Specifications The first requirement was fulfilled by MAN B&W by a multigenset concept. This enables the owner to run the ship in the widest range of power requirement, starting from ship load only in port to maximum required service speed, at almost constant optimal efficiency of the power plant.

Extensive load profile calculations based on the ship's travel schedule proved the high efficiency of this nine-engine concept that utilized electric power transmission to the two new Lips controllable-pitch propellers.

The principle of effective resilient seating of the diesel engines consists of reducing excitations transmitted to the foundation. The excitations arise from both low-frequency forces and structure-borne sound present in the engine base in the frequency range of up to approximately 1,000 Hz.

Rubber elements arranged at an angle were deemed to be the most suitable for the resilient engine mounting.

Apart from the external couples and torque fluctuations, internal forces were also taken into account.

In the case of the 58/64 diesel engine, MAN B&W has developed a rigid engine frame to keep the stresses resulting from internal moments within permissible limits.

Extensive tests were performed by MAN B&W in 1985 and 1986 to check the calculation of the notch stresses of the engine components.

Extrapolation of the results of the MAN B&W experiments to higher cylinder numbers showed that stress levels were within permissible limits at those points where they are dependent on the internal moment and on the number of cylinders. The tests demonstrated the safe stress levels of the entire engine series with resilient mounting.

The third requirement, the total automated and unmanned engine room design, was met by the use of sophisticated control equipment provided under UMS specification of Lloyd's Register.

The Refit Package Since Cunard decided that the engine supplier was also going to furnish the complete accessory equipment for the propulsion system, MAN B&W received the order for the complete propulsion package.

The engines can operate on heavy fuel oil according to the CIMAC K55 level of quality. The new propulsion plant achieves a daily fuel saving of around 250 tons at a service speed of 28.5 knots. Each of the nine engines is rated at 10,620 kw at 400 rpm and is capable of burning 700 est heavy fuels.

This common busbar supplies power at 10 kV directly to the two GEC 44-MW, 60-Hz synchronous motors running at 144 rpm. These motors are among the largest ever supplied for a marine propulsion plant, each weighing 340 tons with a length of 5.5 meters and a width of 8.5 meters. Electric power to all ship and domestic consumers are also supplied from the common busbar via two GEC liquid-cooled 10 kV/3.3 kV transformers of 11 MVA capacity each. With this arrangement a redundancy of 100 percent is available for the ship's load.

To allow the ship to operate a high efficiency even at low speed and during maneuvering, the normal constant propeller speed of 144 rpm can be reduced to 72 rpm. This is achieved by two GEC synchro converters of 11 MW each. These converters are also used for starting and speeding up the synchronous motors. The driving power of the synchronous motors is transmitted via a new twin shaft arrangement to two new 5.8-meter-diameter Lips five-bladed CP propellers.

Optimized Auxiliary Systems For the operation of this power plant, optimized auxiliary systems were installed. All engines per engine room have a common central cooling system. For example, two separate, independent central cooling systems were provided. This arrangement allows the heat to be dissipated from the engine jacket water and charge-air cooling to be utilized.

This is accomplished by having two Serck (four in total) freshwater generators per engine room. This waste heat produces 250 tons/day fresh water per unit or 1,000 tons/day total.

At lower ship's speed, with a reduced number of engines in operation or at partial loads, the lack of waste heat supplied to the cooling system can be compensated for by one steam-heated booster heater per unit. This means that the total freshwater requirement can still be produced at sea.

The central cooling system is designed for 32 °C seawater temperature and the low temperature circuit for 38°C. For each cooling system there are three two-speed seawater pumps, each with 50 percent of rated capacity. This arrangement, combined with the Engard pump control system from Alfa Laval, provides huge energy saving potential.

This is possible because the seawater quanity varies in a wide range depending on the seawater temperature, the total engine load and the degree of waste heat recovered.

With this system, the capacity of seawater required can be matched optimally with the demand.

Similar to the cooling system, the fuel systems are also split into two separate systems, one per engine room. These two fuel supply systems are designed to accommodate CIMAC K55 fuels with a viscosity up to 700 est. The systems operate with fuel pressures of six to eight bar and a final fuel temperature before engine of 147°C.

Each engine has its own separate lube oil supply and treatment system with electrically driven lube oil pumps.

To meet the noise criteria, an exhaust gas system with three Huss silencers per engine was supplied.

Each exhaust gas system is equipped with a Sunrod exhaust gas bgyo-iler to use the exhaust gas ener- The completion of the complex conversion, the largest ever undertaken by a German yard, by Lloyd Werft of Bremerhaven marked the culmination of a unique human and technical achievement and the be- ginning of a new era for the QE2. 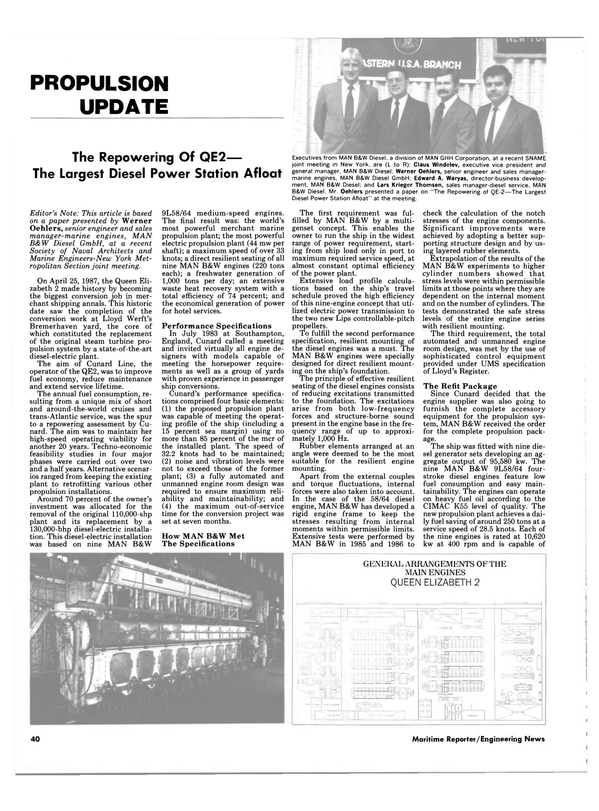